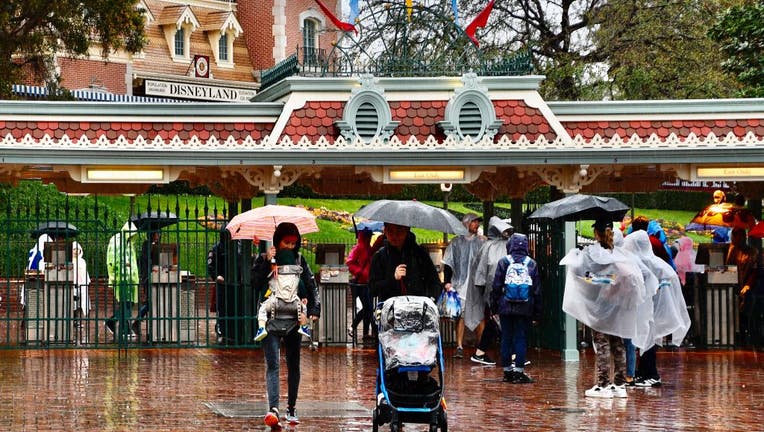 ANAHEIM, CA - MARCH 12: Visitors leave Disneyland in Anaheim, CA, on Thursday, March 12, 2020. Disney announced they are closing Disneyland and California Adventure on March 14 due to the coronavirus (COVID-19).(Photo by Jeff Gritchen/MediaNews Group

LOS ANGELES, Calif. - Much of California is shutting down, with theme parks, horse-racing tracks and concert halls locking their doors while some people postpone their weddings as the nation’s largest state attempts to dodge the new coronavirus.

A day after Gov. Gavin Newsom urged against public gatherings of more than 250 people, an aquarium, zoo, concert halls, amusement parks and other venues quickly responded with stunning announcements that they were closing up shop.

The Disneyland Resort is shutting its Disneyland and California Adventure parks in Anaheim for the rest of the month.

Los Angeles events planner Jimmy Koh said two of his clients even put off their weekend weddings until summer and fall. He expects a third couple may do so as well, in their case not because the guest list will exceed the 250-person cap but because some of their closest relatives planned to travel from Finland. They fear they can’t get into the U.S. now that President Donald Trump shut it down to most people from Europe.

“We are not going to ask for a (financial) penalty or anything,” Koh said about the event changes. “We know the situation. We understand.”

More important to him is the business he’s losing as he cancels an annual conference for 5,000 Asian American lawyers. “That’s a major, major income source for us,” Koh said.

Also on Thursday, Major League Baseball canceled its opening-day ceremonies for at least two weeks, meaning the 56,000 fans planning to watch the Los Angeles Dodgers play the San Francisco Giants at Dodger Stadium on March 26 will have to find something else to do.

They can’t go to the races either. Horses will be running at Northern California’s Golden Gate Fields and Southern California’s Santa Anita Park, but only the horses, their jockeys and a few race officials will be allowed in. People who want to place wagers will have to use betting apps.

The Getty Center and Getty Villa, which earlier planned to keep open their museums and grounds while halting group tours and other events, announced late Thursday that the museums are now closing.

“Given the fluidity and uncertainty of the current crisis, Getty cannot determine the duration of the closure at this time,” Getty officials said in a statement.

People can forget about attending a show at LA’s Walt Disney Concert Hall, where shows have been canceled through March 31.

Likewise at San Francisco’s Curran Theater, where performances of “Harry Potter and the Cursed Child” have been suspended for the rest of the month. San Francisco’s American Conservatory Theater is also being shuttered.

The Monterey Bay Aquarium in Northern California and the Los Angeles Zoo are closing, too.

Even the Adventurers Club of Los Angeles — whose members have summitted Mount Everest, flown in outer space, crossed the Mojave Desert and dived the frigid waters of the Artic and Antarctic — suspended its regular Thursday meetings indefinitely.

“Whereas the members of the Adventurers’ Club of Los Angeles are certainly risk takers in their personal lives, we are not risk takers when it comes to public health and the welfare of our members and visitors,” the group said in a statement.

They are not the only Californians staying close to home. At the 95-year-old The Original Pantry Cafe in Los Angeles, for instance, you could walk right in and find a seat late Thursday morning. Normally there would be a line snaking well outside the door at that hour.

Still, it’s one California venue that won’t be closing — at least for now. It boasts, after all, that it never closes.

“We’re here to serve, no matter what,” Valdez said.