A ferocious storm that battered the Bay Area over the weekend sent several trucks on their side on the Richmond-San Rafael Bridge. This video is courtesy of Twitter user @bayareafire343.

RICHMOND, Calif. - A powerful storm blasted the Bay Area over the weekend and caused major flooding, toppled cars, and left hundreds and thousands of residents in the dark.

Much-needed rain swept over the region, ending the Bay Area's prolonged dry spell. Wild winds also accompanied the drenching rains, making it one of the biggest storms the Bay Area has seen.

Roadways in some parts of the Bay Area were submerged in a few feet of water, making them impassable.

While the region was being drenched by heavy rainfall, winds sent trucks blowing over on Bay Area bridges.

Over on the Richmond-San Rafael Bridge Sunday, out-of-control winds and slick roads forced commercial trucks on their sides.

Video posted on Twitter by user @bayareafire343 showed a truck teetering along the bridge, before toppling a nearby car.

High winds cause a loud humming noise on the Golden Gate Bridge.

In another incident captured by Miranda Kay Holland, traffic grinded to a halt after a big rig tipped over.

"It was a very windy day and I had noticed going into the bridge that a police officer was already not allowing trucks onto the bridge. Took us about 30 minutes inching along the bridge before we actually saw the truck," Holland said. 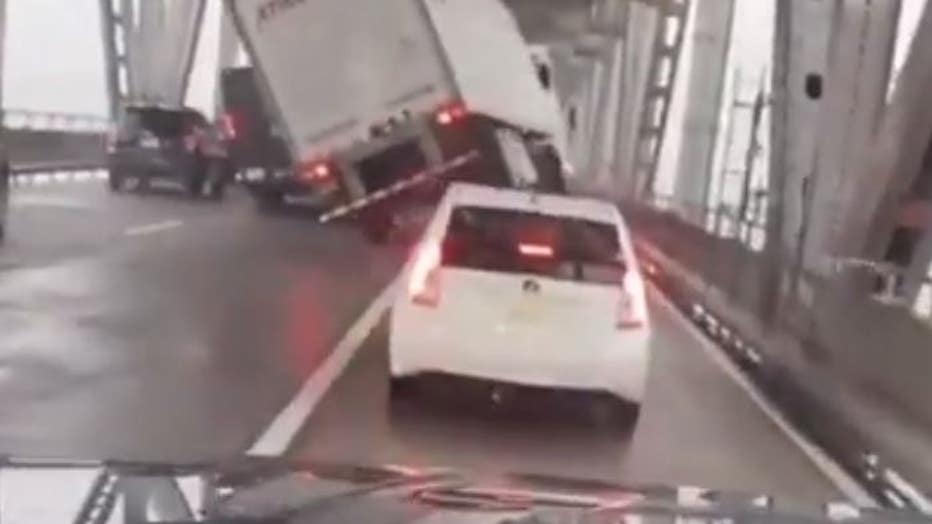