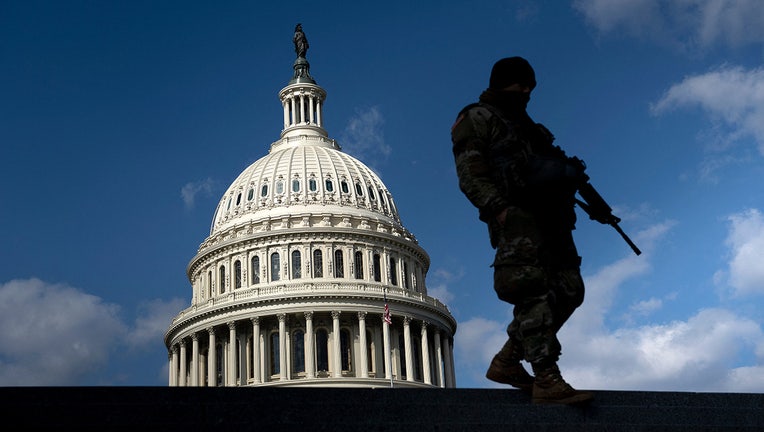 File: A member of the National Guard patrols the grounds of the US Capitol on March 4, 2021, in Washington, DC. (Photo by BRENDAN SMIALOWSKI/AFP via Getty Images)

WASHINGTON - A looming Supreme Court decision on abortion, an increase of migrants at the U.S.-Mexico border and the midterm elections are potential triggers for extremist violence over the next six months, the Department of Homeland Security said Tuesday.

The U.S. was in a "heightened threat environment" already, and these factors may worsen the situation, DHS said in the latest National Terrorism Advisory System bulletin.

"In the coming months, we expect the threat environment to become more dynamic as several high-profile events could be exploited to justify acts of violence against a range of possible targets," DHS said.

It's the latest attempt by Homeland Security to draw attention to the threat posed by domestic violent extremism, a shift from alerts about international terrorism that were a hallmark of the agency following its creation after the wake of the Sept. 11, 2001, attacks.

Indeed, the threats from overseas rate only passing mentions in this bulletin. It notes that al-Qaida supporters celebrated the January standoff at a synagogue in Colleyville, Texas. And it mentions that the Islamic State group called on supporters to carry out attacks in the United States to avenge the killings of the group's leader and spokesman.

DHS also warns that China, Russia, Iran and other nations seek to foment divisions within the U.S. to weaken the country and its standing in the world. In part, they do this by amplifying conspiracy theories and false reports that proliferate in American society.

Domestic violent extremists, however, present the most pressing and potentially violent threat, the agency said, citing, for example, the racist attack in which a white gunman killed 10 Black people at a Buffalo, New York, supermarket in May.

The bulletin, which is scheduled to expire Nov. 30, said calls for violence by domestic extremists directed at democratic institutions, candidates and election workers will likely increase through the fall.

A senior DHS official, speaking to reporters ahead of the release of the bulletin, said it describes the situation as "dynamic" because authorities are seeing a wider variety of people motivated by a broader range of grievances and incidents than in the past.

The upcoming decision from the Supreme Court, which could overturn Roe v. Wade, could lead to violence from either extremist supporters or opponents of abortion rights depending on the outcome, said the official, speaking on the condition of anonymity to discuss some factors that went into the preparation of the bulletin.

RELATED: Roe v. Wade: What you need to know about a key abortion ruling that the Supreme Court looks poised to overturn

Racial extremists may be motivated by immigration enforcement or whether the government continues to rely on Title 42, the public health order that has been used since the start of the coronavirus pandemic to prevent people from seeking asylum at the southwest border, DHS said.

The agency and the FBI are working with state and local law enforcement to raise awareness of the threat, and DHS has increased grant funding to local governments and religious organizations to improve security, Homeland Security Secretary Alejandro N. Mayorkas said in a statement released with the bulletin.