OAKLAND, Calif. - In the nearly two months since California instituted a zero bail policy for low-level suspects arrested during the coronavirus pandemic, several law enforcement officials across the state have made it clear they are not pleased, even calling the idea a "fail."

But a review of data from several Bay Area counties tells a story that isn't quite that simple.

Anywhere between 3% to 12% of the suspects who have been allowed to bail out for free in four Bay Area counties have been re-arrested during a roughly one-to two-month period, an analysis by this news organization shows.

The numbers appear to show a low rate of re-arrests since zero bail started in early April. Nationally, the recidivism rate for state and federal prisoners, studied over a three-year period, is 68% and the conviction rate is 48%.

But a criminal justice professor, who reviewed the data obtained by KTVU through a Public Records Request, said that it's too early to make any conclusions about whether the program is a failure or not.

"I don't think any statistician worth his or her salt would say that we have enough information to say anything conclusive about it," said David Ball, a criminal justice professor at Santa Clara University's School of Law.

Here is the specific breakdown by counties:

Zero bail allows people arrested on misdemeanors and many nonviolent felonies to bail out of custody with no money. The California Judicial Council's idea behind zero bail, enacted April 6, was to allow suspects who haven’t been convicted of anything and who pose little danger to the public to be allowed to await their court date at home.

The intent was to lower the number of people in jail, which many say are petri dishes for  COVID-19 infections.

Besides the extremely small sample size, the sheriff's offices only track suspects who get arrested in their counties, making it hard to draw hard conclusions from the available tallies. So for example, suspects could be let out on zero bail in San Francisco and then get re-arrested in Oakland, and the data provided would not reflect that.

Ball also said he recognizes that arrest and crime statistics gathered during a pandemic are unprecedented and no one really has anything to compare it to.

"A lot of these counties actually have not done a great job of telling us what their historic base rates are," he said. "So even if a county had, let's say, a 10% re-arrest rate pre-trial, well that county might have had 20% before COVID-19."

Still, that hasn't stopped some law enforcement officials from condemning the program.

Shortly after the Judicial Council issued the zero bail program, Contra Costa County Sheriff David Livingston, who is also president of the California Sheriff's Association, told his members: "I, like most California Sheriffs, believe the Judicial Council’s decision to implement $0 bail for a wide range of criminal offenses was irresponsible, unnecessary and an overreaction. A state-wide solution to local issues is almost never good policy – that is certainly the case here. People who commit offenses against others should be held accountable, COVID-19 or not."

However, Livingston's office has not compiled the number of inmates who have been re-arrested.

"It seems like he's not too concerned about tracking," Ball said of the sheriff. "I find that pretty damning."

For other experts, despite the flaws with tracking re-arrests, the numbers are starting to tell a story.

"Any claim that this is a policy failure should be based on empirical data," said San Jose State University University professor John Halushka, whose expertise is in sociology and prison re-entry. "You can’t base policies on anecdotes."

Several sheriffs throughout California have indeed been pointing to recent anecdotes where suspects have allegedly re-offended, including one man who was re-arrested three times in one day, in the hopes of showing the public what they believe: "Zero Bail is a Fail."

Alameda County Sheriff Sgt. Ray Kelly told KTVU this week that zero bail is "not working out so well for us, it really isn't."

His office highlighted the cases of two men who were re-arrested shortly after they were released from Santa Rita Jail, so they asked the Department of Justice prosecutors to charge them, which may lead to longer jail stays under the federal system.

In San Francisco, the Sheriff's Department highlighted the case of one inmate, who was arrested three times after he was allowed to skirt custody because of zero bail.

The first time, he was re-arrested on charges of contempt of court order and shoplifting.

Sixteen days later, he was arrested on charges of shoplifting, contempt of court and petty priors.

And three days after that, he was arrested again on charges that include second-degree robbery, battery, petty theft, commercial shoplifting and contempt of court order.

On the third time, the person was remanded into custody and not given zero bail as an option. 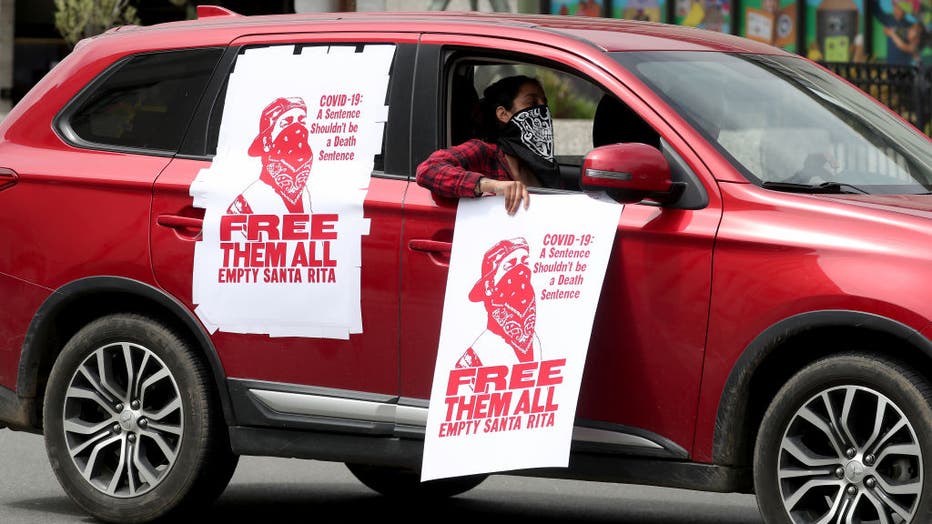 The protest was for Alameda County not releasing Santa Rita Jail inmates even after 27 have tested positive for COVID-19. (Jane Tyska/Digital First Media/East Bay Times via Getty Images)

The San Francisco example shows that the Judicial Council's order still allows police and prosecutors to arrest and hold suspects, just as they did in pre-pandemic times, if they can convince a judge that releasing the person would pose an unacceptable risk to public safety.

The only difference now is that suspects can no longer be held or released based on how much money they have or can raise for bail.

Zero bail, as well as early releases for prisoners serving sentences, comes at a time when overall crime rates in Oakland, San Francisco, San Diego and Los Angeles remains low, according to research by the Public Policy Institute of California.

Ball said he can understand why law enforcement would be frustrated with zero bail: Re-arresting someone shortly after that person had been let out of custody can be more work.

"If you’re a police officer, it will seem like Groundhog Day, seemingly arresting someone over and over again," Ball said.

But zero bail is actually highlighting more of a societal problem, rather than a criminal one, he said.

"This is a warning sign of how we are addressing the problem," Ball said. "We should not be solving poverty with the criminal legal system. There is no evidence it works."

Despite the damning anecdotes highlighted by law enforcement, he says the small amount of data available, at the very least, points to a need to reevaluate the system.

Those figures "actually show we can actually let out more people," said Ball. "If someone is in jail and they have zero bail, it has nothing to do with how dangerous they are. It's about poverty. You'll have to show me evidence that poor people are more dangerous than rich people."

HOW WE COMPILED THE DATA:

This news organization requested public records from five Bay Area county jails, asking to see how many inmates have been released early because of COVID-19 or given zero bail. The request also asked: Of those released on these conditions, how many were re-arrested? The time frame in question was from the start of the shelter-in-place on March 16 to May 18. Some offices provided data that was either less or more than the request asked for. Zero bail didn't start until April 6.