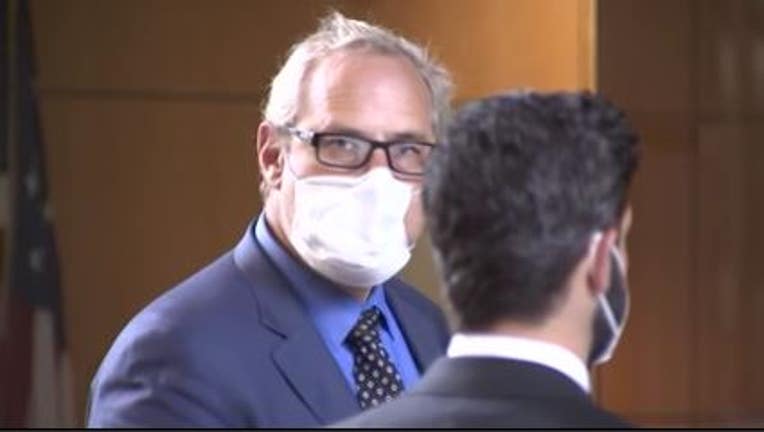 Former Theranos lab director Dr. Adam Rosendorff shows up in federal court in San Jose to testify for the prosecution in the case against Elizabeth Holmes.

SAN JOSE - Attorneys for Elizabeth Holmes – who was convicted of fraud this year in connection with her failed blood testing company Theranos -- are seeking a new trial, claiming the star witness for the prosecution showed up at the disgraced entrepreneur’s home last month to express remorse about her case, according to court documents filed on Tuesday.

Holmes’ attorneys claim that Theranos’ former lab director Dr. Adam Rosendorff showed up at her home in August and spoke to her boyfriend and baby’s father Billy Evans saying "he felt that he had done something wrong" and that the "concerns were weighing on him," the attorneys wrote in the filing.

Holmes’ legal team says the judge should grant a new trial over the statements Rosendorff allegedly made during the unscheduled pop-in.

"Under any interpretation of his statements, the statements warrant a new trial," Holmes’ attorneys said in the filing. Adding that the judge at least "should order an evidentiary hearing and permit Ms. Holmes to subpoena Dr. Rosendorff to testify about his concerns."

Holmes’ legal team wrote that Rosendorff first called them on the evening of Aug. 8, but an hour and 15 minutes later, he was at Holmes door speaking to Evans in two short conversations.

They claim Rosendorff told Evans that he tried to testify honestly but "the government tried to make everyone look bad," that "the government made things seem worse than they were," that "everyone at Theranos was working hard to do something good and meaningful," that "he felt that he had done something wrong, apparently in connection with Ms. Homes’ trial," that "he wanted to talk to Ms. Homes," that "he thought a conversation with Ms. Holmes would be healing for both of them," that "both she and he were young at the time," and finally "these concerns were weighing on him to the point where he had difficulty sleeping."

Rosendorff and the government have not responded to the claims and it's unclear if they have any merit.

Rosendorff became a key whistle-blower who spoke anonymously to the Wall Street Journal, which wrote a scathing series of exposes on Theranos starting in 2015.

He also testified at the trial of Holmes' co-defendant and former partner and boyfriend Sunny Balwani.

They are both scheduled to be sentenced later this year.

Holmes was indicted in 2018 following her claims to investors, including that her blood analyzers could run hundreds of tests form a single drop of blood.

She was caught doctoring documents claiming her technology was verified by major pharmaceutical companies and made false claims that her analyzers were being used by the military.

After her products launched at Walgreens locations in Arizona and California, Holmes and Balwani began using modified third-party analyzers rather than their proprietary technology to test blood.  They never disclosed to Walgreens or other investors that they began using other companies' technology. At trial, they said the made the omissions because they were "trade secrets."

In a long-shot attempt last month, Holmes sought to have her conviction vacated. The judge in the case has signaled he will reject the motion.

Evan Sernoffsky is an investigative reporter for KTVU. Email Evan at Evan.Sernoffsky@fox.com and follow him on Twitter @evansernoffsky.