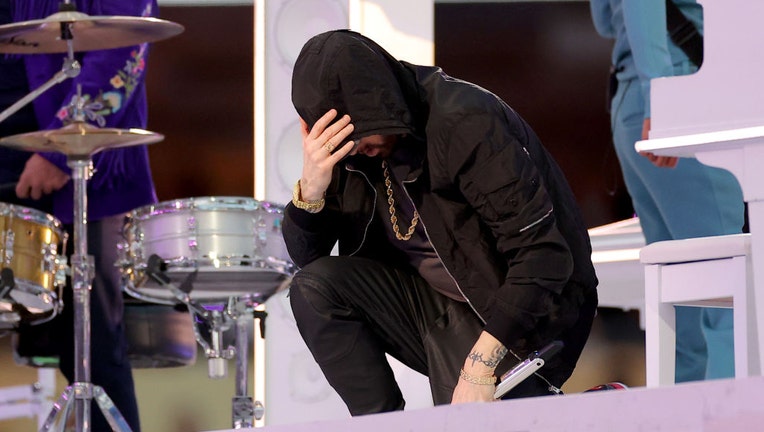 INGLEWOOD, Calif. - As his rendition of "Lose Yourself" ended during the halftime show at the Super Bowl, Eminem took a knee and held his head in his hand in what seemed like a tribute to former San Francisco 49ers quarterback Colin Kaepernick who started a global movement by taking a knee in 2016 to protest police brutality.

Social media lit up with the move, pointing out reports that the National Football League told him not to do it. However, the NFL denied reports that it was attempting to stop Eminem from making the gesture.

"We watched all elements of the show during multiple rehearsals this week and were aware that Eminem was going to do that," league spokesman Brian McCarthy said.

Eminem didn't post about the move. And neither did Kapernick.  So it's hard to know exactly what they were thinking.

But that didn't stop the internet from weighing in.

RAW VIDEO: Kaepernick speaks at length about decision to not stand for National Anthem

"Thank you Eminem for taking knee," one person wrote.

"@Kaepernick7 your kneel was not taken in vain," another person wrote.

Eminem has a history of supporting Kaepernick's efforts.

In 2017, during the BET Hip Hop Awards, Eminem called out former President Donald Trump while embracing Kaepernick and his message on racism and police brutality.

The Detroit rapper raised his fist saying: "F— that, this is for Colin, ball up a fist and keep that s— balled like Donald the b—-."

Eminem also included Kaepernick in the lyrics of his 2017 song "Untouchable," where he rapped: "Somebody has to be the sacrificial lamb ... So they call it a Kaepernick tantrum ...If you don't stand for the national anthem ... We raise it, you better praise it."

Kaepernick hasn't played pro football since he took a knee more than five years ago.

Although the NFL has encouraged teams to look at Kaepernick, he has yet to receive another pro contract.