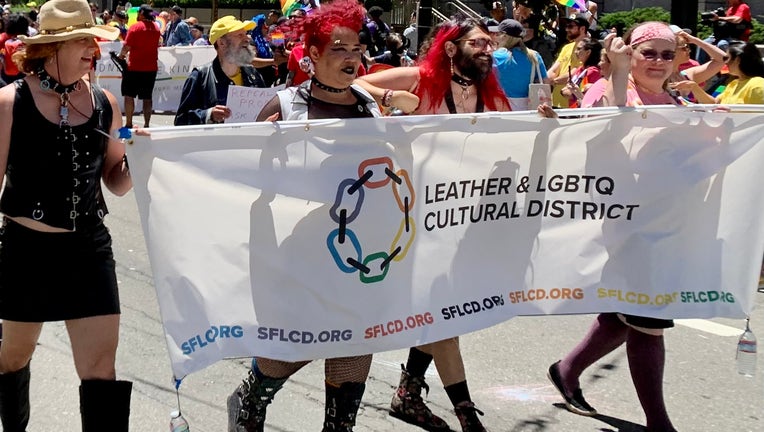 Sumiko Saulson and Tristissima as part of the Leather and LGBTQ Cultural District in the Leather Contingent at the San Francisco Pride Parade on June 26, 2022. Photo by Norm Lynde.

Select writers from the trans, trans-identified and nonbinary community were offered a space to tell "provocative, graphic, sexy, titillating, and funny stories" over Zoom.

Sumiko Saulson, served as one of the hosts and is also on the LCD's board of directors. Saulson's pronouns are ze/hir/hirs, from the gender-neutral pronoun set – a concept that is much older than many may realize. There are instances of nonbinary and gender-neutral language use dating back to the 1800s.

The event came the same week as the Midterm election, where the threat of a conservative ‘red wave’ didn't exactly materialize. Many have observed the Republican Party has an increasingly extreme wing of politicians criticized for hateful and divisive rhetoric. The ‘red wave’ that was expected in 2022 was largely rejected in this election. 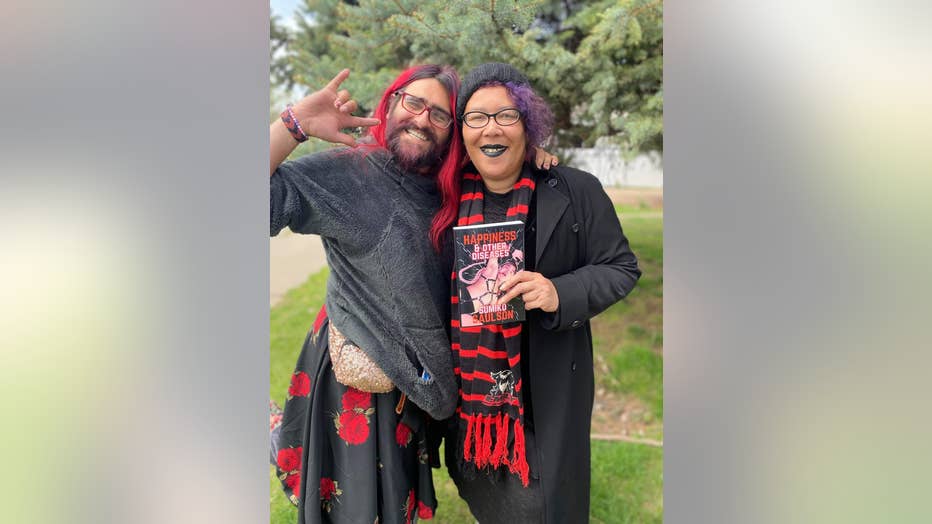 Threats of violence against marginalized groups have surfaced in many places, including the Bay Area.

"This situation is getting volatile. It's dangerous to be out as trans people in the very toxic environment that we are dealing with," said Saulson. Ze said for this storytelling hour there were some cancelations; one of which was due to one of the readers, who is a school teacher, becoming subject to a TikTok video that went viral. "She was emotionally upset when she found out she was the subject," Saulson said. Part of the video included text that said, "Portland teacher's mad zesty." Saulson explained the slang was used in a derogatory way, like a dog-whistle reference aimed at members of the LGBTQ community.

"I think it is increasingly stressful. I'm very out. My partner is very out," Saulson said. But ze sees it as a teachable moment. In addition to being trans, Saulson is a nonbinary, 54-year-old African American and Ashkenazi Jew. "It's important for younger people who are out there, who are trans, to see that we're still out there. Don't feel so alone."

Saulson concurs with political observations from the midterm election that younger people tend to lean more progressive, but has some concerns. 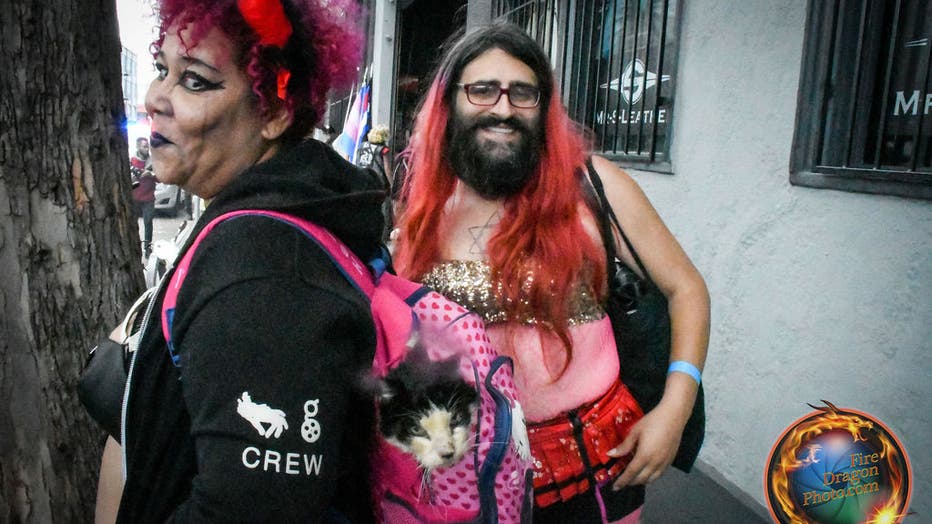 "I worry about them getting bullied and want to make sure they're not alone. Me and my partner on TikTok get comments about what they think their life might be like in 20, 40 years," Saulson said. "When they see us, they see it's possible for queer people to grow older."

Referring to hir body, Saulson says, "I do feel more comfortable now more than ever."

But the journey hasn't been easy and there are recent instances where Saulson, an Oakland resident, has been hassled in public. Ze recalls that something as ordinary as a trip to the public restroom at a movie theater can create stress.

"When you're a nonbinary person, they don't have gender-neutral in most spaces. You have to make a choice. I went in the women's restroom and an older woman was freaking out and going off, calling me ‘it’, ‘that person’, and that I shouldn't be in that bathroom." Saulson notes being assigned female at birth. "If I would have went in the men's restroom, I don't think that would have made the situation any better. I used the bathroom, grabbed my stuff and left. I wasn't trying to engage with them at all."

"I feel protective towards my partner," said Saulson. "I feel bad for my partner when they are hassled."

Tristissima wrote in an introduction for Transgender Awareness Week, presented at the story hour: The week culminates with the Trans Day of Remembrance on Nov. 20.

"I for one, am only 40-years-old and I grew up believing I was imaginary. I came out of the closet in 2000, five years after ‘genderqueer’ was coined and five years before ‘non-binary gender' was coined. If you do the math, you'll notice that I attended my first [Transgender] Day of Remembrance before even my own community had much of an idea what to do with me."

SEE ALSO: Lil Nas X 'made it rain' on drag performers at SF Oasis this weekend

Gay & Lesbian Alliance Against Defamation (GLAAD) said a 2021 Gallup poll showed 68% of Americans believe they have never personally met anyone who is transgender. GLAAD notes media has overwhelmingly misrepresented and mischaracterized who trans people are.

Tristissima makes the point that all too often, the trans community is reduced to sexuality and over-sexualized. Be said tropes in pornography persist like, ‘she-male’ that denigrate trans individuals.

Events like the storytelling hour help Tristissima embrace transness, or as be puts it, it can help "inscribe meaning for our bodies."

And while this event was rooted in eroticism, it allowed the trans community to tell their own stories among one another, something Tristissima refers to as a form of T4T expression, or trans for trans.

"It felt really good for me. There were [cisgender] people present, but it was all trans people speaking. Their presence was not taking away from what I was saying."

As for holding such sacred events and having this community in a place like San Francisco, Tristissima spoke of its essence as a lifeline.

"Being able to talk about other people who share that experience is an echo chamber in the best way. I could live somewhere else, but my lifespan would be shorter. We need the concentration. We need the home base, otherwise we can’t bring it to other places."