Hoax phone calls about intruders on campus prompted the lockdown of at least four high schools in the Bay Area on Wednesday morning.

Police in the Bay Area were investigating swatting incidents at multiple schools in San Jose, Oakland, San Francisco, and more towns on Wednesday.

The fake reports of shooters were intended to draw a large police response, which is known as swatting.

In San Jose, police said they received a "hoax" call from someone claiming there were multiple students shot at Lincoln High School on Wednesday.

"The call was a hoax and unfounded," police said. "We will investigate the caller."

A prank call about a threat to Oakland's McClymonds High School prompted police to investigate, authorities told KTVU. It was a bogus call as well.

Oakland Unified spokesperson John Sasaki said, "anytime you have police coming in ready to deal with a mass shooter, it’s something that has them very heightened. It raises alarm levels anywhere." 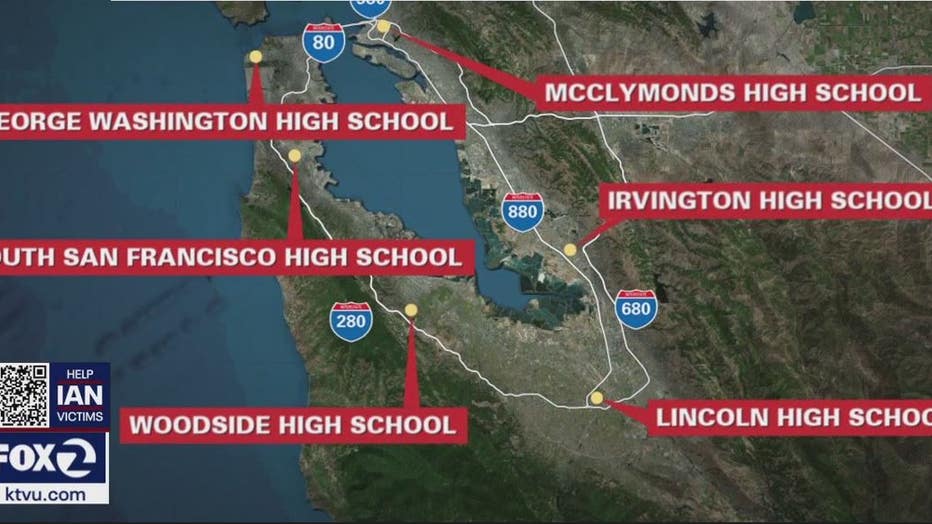 George Washington High School in San Francisco was also the subject of a phony report.

Police say they checked the campus and lifted the lockdown.

A similar incident happened at Woodside High School in San Mateo County. An alert sent out by the county said the school was also in a lockdown while law enforcement checked the campus.

Police responded to reports of active shooters at schools in San Francisco, San Jose, Oakland , Woodside and South San Francisco that turned out to be false, according to officials.

An unidentified school in Fremont was placed on lockdown while police officers and firefighters responded to an untrue report of a shooting, the police department there said.

In Belmont, police said they would add more officers to school campuses there as a precaution because of the bogus calls in other areas.