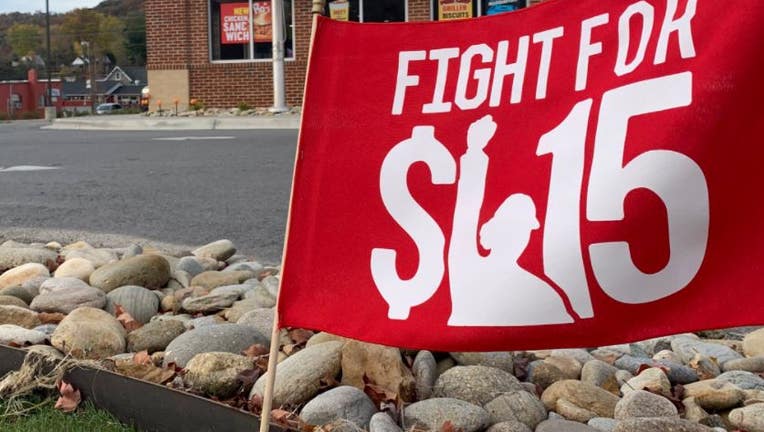 Image taken from Fight For 15 Nor Cal Twitter page.

OAKLAND, Calif. - Fast food workers are striking statewide Tuesday, including in Oakland and Campbell, to demand better health and safety standards at their workplaces, organizers with the Fight for $15 said Monday.

Workers are also voicing their support for Assembly Bill 257, which will go before the Assembly in January and would create a Fast-Food Sector Council able to set minimum health, safety, and employment standards in the state's fast-food industry.

The rallies start at noon in Oakland at Jack in the Box at 532 Hegenberger Road and in Campbell at Burger King at 49 W. Hamilton Ave.

Oakland workers have allegedly filed complaints with the California Division of Occupational Safety and Health and the Alameda County Public Health Department over violence and abuse they have been facing during the day, according to organizers.

Customers have thrown drinks and food, broken the glass door in the lobby and brandished a gun in a dispute over food, organizers allege. Workers allege that managers know what is going on and have done nothing.

"Management is accustomed to these kinds of violent incidents, and we don't think they care what happens to us," the workers wrote in the public health complaint. "They tell us that if someone gets violent we should run to the bathroom or run out the back door, but there isn't always time to react."

In Campbell, workers at a Burger King allege managers failed to protect them against COVID-19. They too have filed complaints with Cal/OSHA and the Santa Clara County Department of Environmental Health, organizers said.

AB 257 is also known as the Fast Food Accountability and Standards (FAST) Recovery Act, which was authored principally by Assemblymember Lorena Gonzalez.

Neither Burger King nor Jack in the Box immediately responded to requests for comments.