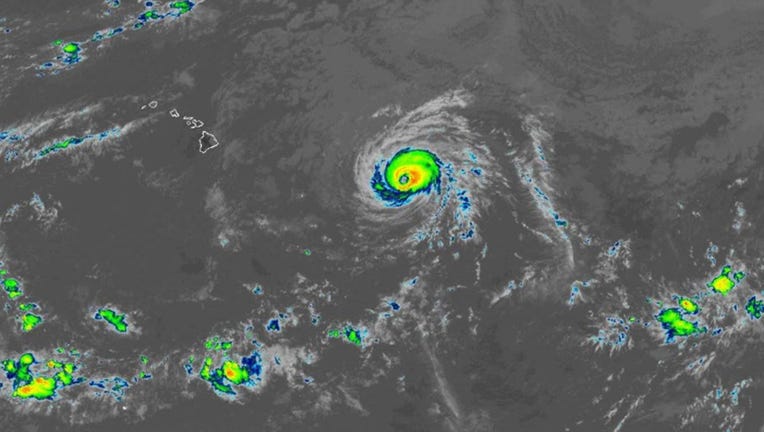 Hurricane Douglas closes in on Hawaii

HONOLULU - Hawaii on Saturday geared up to face a hurricane that threatened to pummel the islands with dangerous surf, strong winds and flash floods even as residents grappled with escalating numbers of coronavirus cases.

Powerful storms are familiar to many in Hawaii who have spent the past several summers preparing for tropical cyclones. But the pandemic adds a new twist.

Luke Meyers, the administrator of the Hawaii Emergency Management Agency, urged people get ready by learning about the hazards where they live.

Hurricane Douglas was 440 miles east of Hilo early Saturday It was packing winds of 105 mph, making it a Category 2 hurricane.

The National Weather Service forecasts Douglas will weaken as it passes over cooler waters and encounters wind shear closer to the Hawaiian Islands. Meteorologists predict it will be near-hurricane strength as it nears the Hawaiian Islands Saturday and Sunday.

The coronavirus was complicating preparations for the American Red Cross, which operates emergency shelters on behalf of local governments.

Many volunteers who normally staff the shelters are older or have pre-existing health conditions that put them at higher risk of getting severely sick if infected by the virus. Many of these volunteers are thus staying home this storm.

At the same time, each shelter will have less capacity because of the physical distancing requirements to prevent the spread of the disease, and more shelters (and workers) will be needed to accommodate people.

Maui Mayor Michael Victorino said his county won't open as many shelters for Douglas as a result of the staffing situation. But he still expects to have enough room for those who need to evacuate because there are so few tourists visiting during the pandemic. Travelers are normally some of the biggest users of Maui's shelters during hurricanes.

The CEO of the Pacific Islands region of the American Red Cross was understanding of those uncomfortable about volunteering during the pandemic. Diane Peters-Nguyen put out a call for others who might be able to help.

"We do ask people to think about that and take care of themselves and their family first. But if they're able, we really appreciate those that can, to respond," she said.

Hawaii has some of the lowest coronavirus infection rates in the nation, but COVID-19 numbers have been rising in recent weeks. On Thursday and Friday, the state reported 55 and 60 new confirmed cases, both of which were record highs.

At Pearl Harbor, the Navy began moving ships and submarines out to sea where they will stay until the threat from the storm subsides. The Navy will either secure its aircraft in hangars or fly them to other airfields.

Hawaiian Airlines canceled all Sunday flights and some Saturday flights between Honolulu and the other islands.

Hawaii is used to stocking up on food and other essentials to ride out hurricanes. Yet in one sense it is ill-prepared for the storms because so many of Hawaii's single-family homes are older structures built before building codes were changed in the 1990s to take account of hurricane hazards.

A 2015 state report warned that these homes "will be vulnerable to structural collapse under a hurricane's high wind pressures and wind-borne debris" unless they have been retrofitted.

Meanwhile, Tropical Storm Hanna was upgraded to a hurricane Saturday, moving toward the Texas coast and threatening to bring heavy rain, storm surge and possible tornadoes to a part of the country trying to cope with a surge in coronavirus cases.

The storm, which is the first hurricane of the 2020 Atlantic hurricane season, was expected to make landfall Saturday afternoon or evening south of Corpus Christi, the U.S. National Hurricane Center said Saturday morning. It had maximum sustained winds of 75 mph and was centered about 100 miles east-southeast of Corpus Christi and was moving west at 9 mph.

Many parts of Texas, including the area where Hanna is expected to come ashore, have been dealing with a spike in coronavirus cases in recent weeks, but local officials said they were prepared for whatever the storm may bring.

"And don't feel like since we've been fighting COVID for five months, that we're out of energy or we're out of gas. We're not," Corpus Christi Mayor Joe McComb said Friday. "We can do these two things together and we're going to win both of them."

Corpus Christi is in Nueces County, where health officials made headlines when they revealed that 60 infants tested positive for COVID-19 from July 1 to July 16.

Farther south in Cameron County, which borders Mexico, more than 300 confirmed new cases have been reported almost daily for the past two weeks, according to state health figures. The past week has also been the county's deadliest of the pandemic.

Cameron County Judge Eddie Trevino, the county's top elected official, said he was awaiting word Friday of whether hotels would be used to house recovering COVID-19 patients in order to free up hospital beds.

"If there's any benefit to be gained from this, it's that people have to stay at home for a weekend," Trevino said.

Officials reminded residents to wear masks if they needed to get supplies before the storm arrives or if they have to shelter with neighbors because of flooding.

The main hazard from Hanna was expected to be flash flooding, Chris Birchfield, a meteorologist with the National Weather Service in Brownsville, said Friday. Forecasters said Hanna could bring 6 to 12 inches of rain through Sunday night -- with isolated totals of 18 inches -- in addition to coastal swells that could cause life-threatening surf and rip current conditions.

Coastal states scrambled this spring to adjust emergency hurricane plans to account for the virus, and Hanna loomed as the first big test.

South Texas officials' plans for any possible rescues, shelters and monitoring of the storm will have the pandemic in mind. Gov. Greg Abbott said various resources to respond to the storm were on standby across the state, including search-and-rescue teams and aircraft.

Trevino said shelters would keep families socially distanced if any need to evacuate their homes.

In the Mexican city of Matamoros, located across the border from Brownsville, volunteers worried whether the tropical storm would affect a makeshift migrant camp near the Rio Grande where about 1,300 asylum seekers, including newborn babies and elderly residents, are waiting under the U.S. immigration policy informally known as "Remain in Mexico."

Erin Hughes, a volunteer at the camp who is a civil engineer from Philadelphia, said tropical storms pose a devastating threat since the camp is located on a floodplain, and that she and others were monitoring the river's water level.

As of Saturday morning, there was a storm surge warning in effect for a stretch of coast south of Corpus Christi from Baffin Bay to Port Mansfield. Storm surge up to 5 feet was forecast for that area. People were advised to protect life and property from high water.

Tornadoes were also possible Saturday for parts of the lower to middle Texas coastal plain, forecasters said Friday. A hurricane warning remained in effect for Port Mansfield to Mesquite Bay, which is north of Corpus Christi, and a tropical storm warning was in effect from Port Mansfield south to Barra el Mezquital, Mexico, and from Mesquite Bay north to High Island, Texas.

Forecasters said Hanna could bring 6 to 12 inches of rain through Sunday night -- with isolated totals of 18 inches -- in addition to coastal swells that could cause life-threatening surf and rip current conditions.