A Florida couple and their dog were charged by a black bear outside their home in Apopka, Florida. Credit: Rachel Smith via ViralHog

APOPKA, Fla. - A Florida couple and their dog were forced back inside their home after a large black bear started charging at them, and it was all caught on camera.

Jason and Rachel Smith joined FOX Weather on Tuesday morning to describe the harrowing experience. The Smiths said they had seen bears before but never had an experience like this.

The couple said they check for bears before taking their dog outside to ensure it's safe, but this time was different.

"We see them sometimes it's once a month, but lately, they have been out several times a week," Rachel Smith said. "We catch them on our Ring doorbell quite often. The mom and babies have been around playing by our front door. But this time of year, they're really active for some reason."

Jason and Rachel Smith joined FOX Weather to describe the harrowing experience. The Smiths said they had seen bears before but never had an experience like this.

But on this particular day, Rachel said she didn't notice anything out of the ordinary until she heard her husband yelling.

"We were out there with our dog, and he was having a potty break. I was actually looking towards my house. I was looking in the opposite direction," she said. "My husband did see the bear come around the corner, and he was yelling and waving his arms up, trying to get the bear to stop. I just happened to turn around, and the bear was already running at me about 20-30 feet away. So I didn't hear anything until my husband was yelling."

Jason said he was ready to defend his wife and dog if needed.

"If I was faced with the opportunity again, and I had to defend my family from a bear, absolutely," he said. "He came around the car so quickly. I literally only had one second to make a decision. I tried to yell and make as much noise as we're supposed to do, but the bear was charging. So we just decided to run. We knew we could get indoors really quickly, so that was the decision we made." 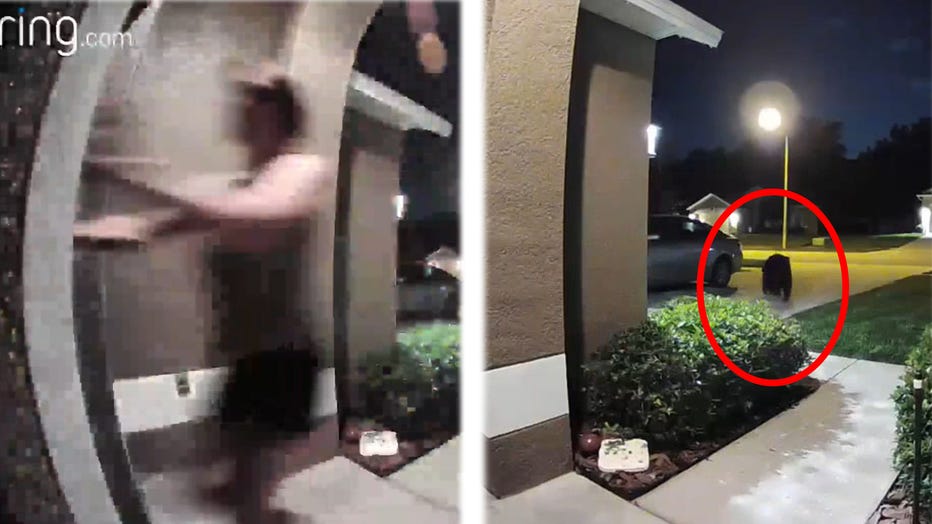 Two screengrabs from a Ring doorbell camera video show the couple running back into the home (L) and the charging black bear behind them (R), on April 26, 2022, in Apopka, Florida. Credit: Rachel Smith via ViralHog

The couple told FOX Weather they had no idea what made the bear charge at them and their dog.

"Generally, they're very shy," Jason said. "And if they see you, they generally will try to avoid you and go in the other direction. We see them very often, and generally, we go our own separate way."

He said this was just an unusual circumstance.

"This is not normal," Jason said. "We just caught this particular bear on a very bad day."