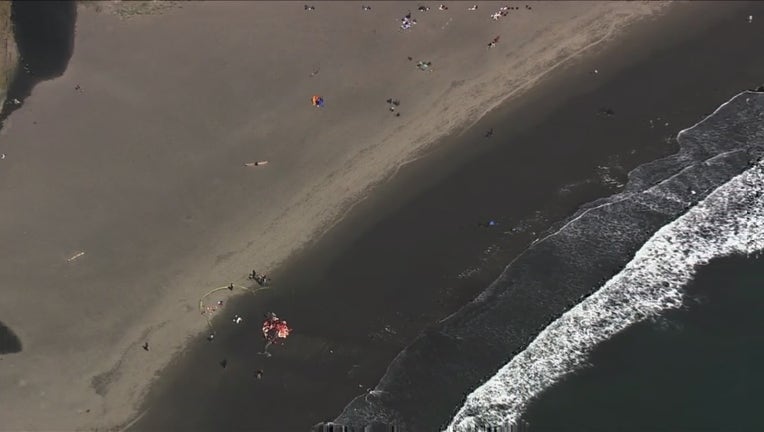 SAN FRANCISCO - A dead whale washed up onto Muir Beach in Marin County Thursday morning, the fourth whale to wash ashore in the Bay Area in just over a week.

Experts are sounding the alarm, saying the repetative nature of the deaths is entirely out of the ordinary.

The Marine Mammal Center is working to determine the cause of the deaths, but so far the necropsies they've performed have been inconclusive.

"This year we’ve had these two animals and there was another one on the weekend so three animals in the San Francisco area in a very short space of time so we are concerned," said Dr. Pádraig Duignan, Marine Mammal Center Director of Pathology.

A view of Muir Beach from SkyFOX showed that the whale's body was cut open while researchers examined the remains.

Three gray whales have been found dead in and around the San Francisco Bay in the past week. It’s raising concern among marine scientists who said that number is alarming.

The gray whale population has fallen by 25% along the West Coast since 2016, according to research released earlier this year.

Past experience is that half of the animals that the center examines die in the Bay from human interaction.

"Either they are being struck by a ship or they got entangled in something or they have been hit by a propeller," said Duignan.

The center said it’s often by accident as the Port of Oakland is often busy with ship traffic. Gray whales are difficult to see and elusive in the waters.

The dead whale was discovered Wednesday morning after it washed ashore at Crissy Field in San Francisco.

The mammal center is raising awareness among the shipping industry and smaller boats to watch out for the whales and give them space, hoping to prevent more deaths.

In 2019, the waters around the San Francisco Bay saw a similar pattern of dead whales washing ashore.

"It may be that we don’t see any more in the next few weeks but it also could be we could have more. And if we do have more it will put us in the ballpark of 2019," said Dr. Duignan.