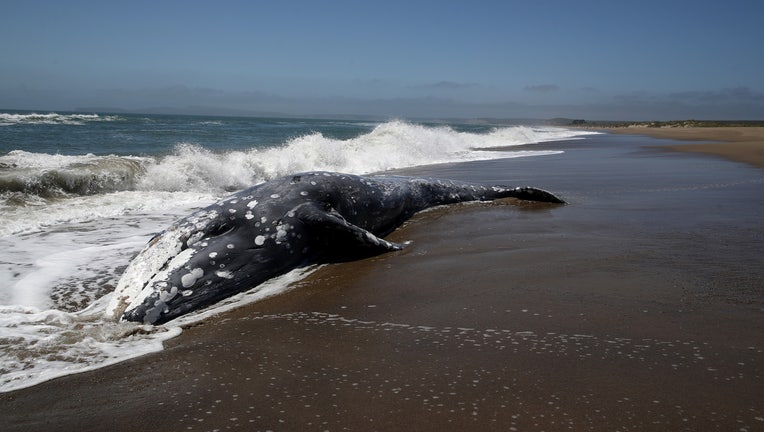 POINT REYES STATION, CALIFORNIA - MAY 23: A dead Gray Whale sits on the beach at Limantour Beach on May 23, 2019 in Point Reyes Station, California. A thirteenth Gray Whale washed up dead on a San Francisco Bay Area beach as scientists try to figure

SEATTLE - Researchers say the population of gray whales off the West Coast of the United States has fallen by nearly one-quarter since 2016, resembling a similar die-off two decades ago.

In a paper released Tuesday, NOAA Fisheries reported that surveys counted about 6,000 fewer migrating whales last winter, 21,000 as compared with 27,000 in 2016.

The agency declared an "unusual mortality event" in 2019 as dozens of gray whales washed up on Pacific Ocean beaches. Scientists aren’t sure what has been causing the die-off. But they believe that it is within the range of previous population fluctuations and that the number of whales may have exceeded what the environment can support.

After an estimated die-off of 23 percent in 1999-2000, the population rebounded to even greater numbers, NOAA said. The agency said it appears the big population swings don't reflect long-term threats to the whales' survival.

The eastern north Pacific gray whale has recovered from being hunted to near extinction in the middle of the 20th century. It was removed from the Endangered Species List in 1994.

The whales migrate 10,000 miles from feeding grounds in the Arctic to birth their calves along Mexico's Baja Peninsula. Teams of researchers counted the whales as they passed Granite Canyon, California, near Carmel, on their way south from December 2019 to February 2020.