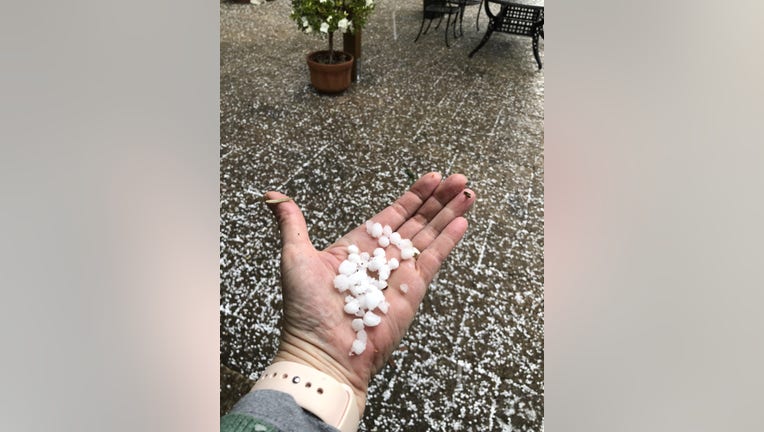 DANVILLE, Calif. - Parts of the East Bay looked like a Winter Wonderland Tuesday afternoon as we are in the midst of a cold snap, but the precipitation accumulating on the ground was actually hail, not snow.

A flurry of hail photos and videos made the rounds on social media and viewers shared their documentation with the KTVU newsroom, saying "pea-sized" hail fell in places like Danville, Livermore and San Ramon. One viewer captured the sight at around 3:55 p.m.

Freeze warning for some, hail falls in other parts of the Bay Area

Parts of the Bay Area looked like a Winter Wonderland Tuesday afternoon as we are in the midst of a cold snap, but the precipitation accumulating on the ground was actually hail, not snow.

A viewer sent KTVU video of a hail storm in Fairfield.

Our own Roberta Gonzales said, while it looks like snow, temperatures in the East Bay were still in the mid 40s and had not reached the 32-degree freezing mark.

For some, that could change. NWS has issued a freeze warning as of 8 p.m. on Tuesday for the North Bay, East Bay, inland South Bay, and interior areas of the Central Coast.

In the 5 o'clock hour, Napa's temperature was only at 41 degrees as Hayward struggled to hit 50 degrees this afternoon.

By nightfall, San Francisco plunged to 45 degrees. The city's Department of Homelessness and Supportive Housing is opening a pop-up shelter at Gene Friend Recreation Center at 270 6th Street, starting Wednesday. No referrals are necessary for those seeking shelter from the cold. You can walk up to secure a spot starting at 10 a.m. More cold snap resources for San Francisco can be found here.

Marin County Department of Emergency Management will activate severe weather emergency shelter until Friday to get people, especially those who are homeless, out from the overnight temperatures.

People are advised to bring in pets and cover small plants in some of these areas.

The unusual weather has brought actual snow – a lot of it – to the Sierra, wreaking havoc on major routes.

Hail is typically produced in thunderstorms and we had received reports of thunderstorm activity, accompanied by dark clouds. One viewer said they saw sleet in American Canyon.

Later in the evening, additional bursts of hail were reported in South San Francisco, and in northern areas like Larkspur and Marin.

KTVU's Mark Tamayo says the pattern is expected to stick around through Friday. But if you're fortunate enough, maybe enjoy this burst of precipitation as we are still in need of rain because of the severe drought. 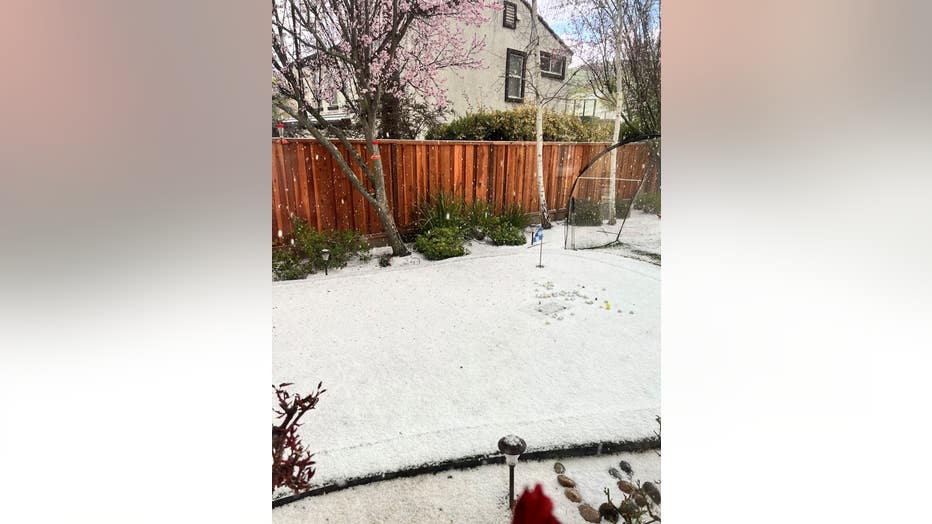 Heaters are selling fast as the Bay Area gears up for below normal temperatures. San Francisco saw rain for the first time in 45 days Monday night. We have the latest weather updates.

Hail in the East Bay, colder pattern through Friday

We've captured images of hail in the East Bay Tuesday afternoon. Temperatures are cold in the Bay Area with some freeze warnings in place. The pattern should last through Friday. KTVU's Mark Tamayo has the full forecast.