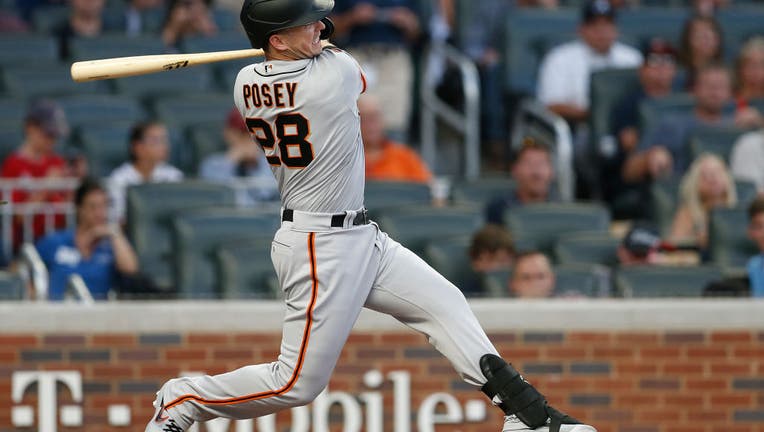 ATLANTA, GEORGIA - SEPTEMBER 21: Catcher Buster Posey #28 of the San Francisco Giants bats during the game against the Atlanta Braves on September 21, 2019 in Atlanta, Georgia. (Photo by Mike Zarrilli/Getty Images)

PRATHER, Calif. - A 9-year-old girl who lost her collection of baseball cards when a wildfire destroyed her family’s central California home received a huge surprise when firefighters presented thousands of new, donated cards and put her on the phone with her favorite player.

Reese Osterburg didn’t get a chance to save her 200-card collection when the Creek Fire forced her family to evacuate from their home in Pine Ridge. Her family told the East Bay Times that she spent three years compiling the collection, which included a few prized cards of San Francisco Giants player Buster Posey, and would often pore over them while watching baseball games.

Her uncle bought her a pack of baseball cards and a binder to help rebuild her collection.

Reese then wrote a letter to Posey, asking him to sign a new card and ball. Her mother, Amy Osterberg, wasn’t sure the best way to mail it to Posey so she asked a friend in local law enforcement for help.

A San Jose man who heard about the plea on the radio donated more than 25,000 baseball cards he had been collecting since the 1990's.

“I thought, you know what, rather than sell these on eBay, I’m just going to donate them," Kevin Ashford told NBC Bay Area. "I’m gonna donate them all and put a smile on a little girl’s face.”

When Cal Fire firefighters presented the cards to Reese and friends on her baseball team on Friday, they put her on a Zoom call with Ashford so they could meet. They also helped arrange for Posey to jump on the call to speak with his young fan.

“This is the best day I've ever had,” Reese told The Fresno Bee. “More than awesome, probably."