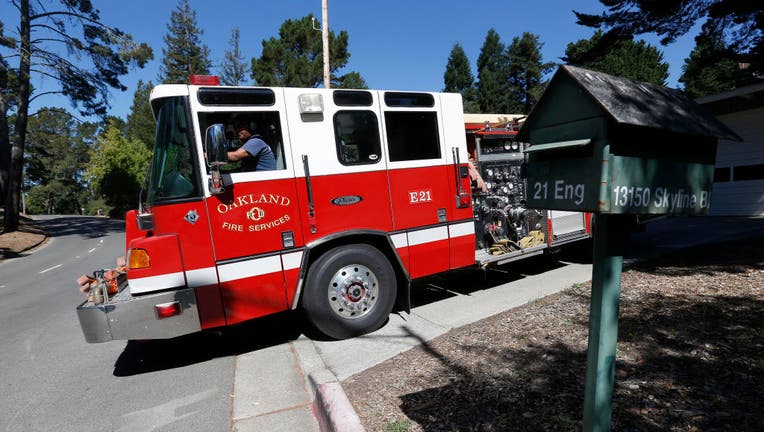 OAKLAND, CA - SEPTEMBER 24: Oakland firefighters from Station 21 head out to patrol the hills along Skyline Boulevard in the hills of Oakland, Calif., on Tuesday, Sept. 24, 2019. A red flag alert is in effect until Wednesday, with high temperatures a

OAKLAND, Calif. - Oakland police say a 37-year-old man and his baby daughter who were killed in a residential fire early Saturday were the victims of homicide, and authorities say the fire, the deaths and the related injuries of family members are linked to other recent crimes.

Police spokeswoman Johnna A. Watson said in a statement Saturday afternoon that police believe a homicide on April 10 in East Oakland and a fire at a business in the same location on April 14 may linked to Saturday's killings and fire.

She also said that someone police investigators believe was involved in the April 10 shooting turned himself into Oakland Police on Thursday and was placed under arrest. That case was forwarded to the Alameda District Attorney's Office for review and charging.

On Saturday morning, police and firefighters were dispatched to a home in the 9500 block of Stearns Avenue following a report of an intentional structure fire.

When authorities arrived, several people were still trapped inside.

Firefighters extinguished the blaze and found the father and his 1-year-old daughter, Watson said.

Family members who were injured in the blaze remain hospitalized.

Oakland Fire Department arson Investigators' preliminary investigation indicated the fire was intentionally set, she said, and they are continuing to investigate.

Police and Crime Stoppers of Oakland are offering rewards in cases where a death is involved. A reward of up to $40,000 may be offered for information leading to an arrest made in today's case.