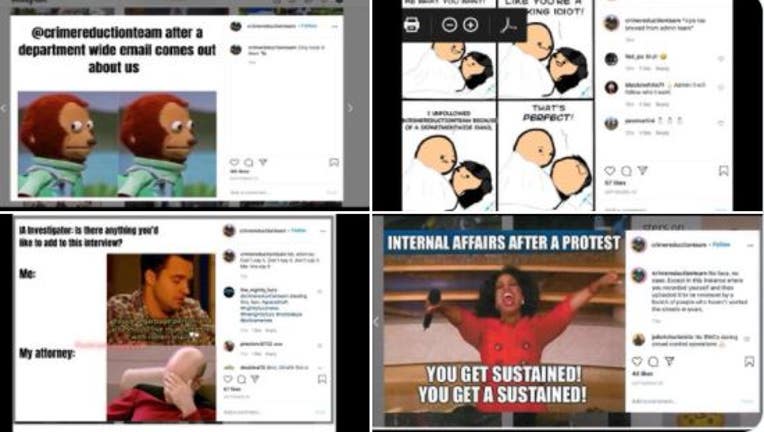 OAKLAND, Calif. - An outside firm hired to investigate an Instagram page created by a fired Oakland police officer found that the police department's internal probe into a slew of racist and sexist posts was "anemic," raising questions about whether federal oversight of the department will be lifted in the wake of the latest scandal.

In a 23-page report filed in federal court on Monday, investigators from Clarence, Dyer & Cohen LLP in San Francisco delivered a scathing report stemming from the discovery of a now-defunct Instagram page, called @crimereductionteam.

The firm found that the internal Oakland police investigation into these posts "took much too long to recognize the bigoted and corrosive nature" of the posts, adding that "there is no satisfactory explanation for this collective failure."

"At best, this failure signals an absence of processes within the department to ensure a safe and discrimination-free workplace committed to court-ordered reforms," the firm wrote in its submission to U.S. District Court Judge William Orrick, the latest judicial officer to oversee the Oakland Police Department as part of a nearly 20-year negotiated settlement. "At worst, it bespeaks a culture so hostile to women and minorities, and so wedded to a discredited model of policing, that it cannot identify discriminatory and anti-reform messaging when it sees it."

The firm noted that the biggest problem was that when notified, no one in the Oakland police department thought the posts – some which joked about women using sex to advance in their careers or depicting Latinos as gang members – were inappropriate and offensive. Superiors only seemed to care that their social media information might give way to their private lives, the firm found.

In fact, some officers continued to insist that there was nothing troubling about offensive memes from the page, the firm noted. Other officers "improbably" claimed they did not understand the memes well enough to say whether they were offensive or not. And still others, the firm noted, "doubled down" that the memes were not offensive.

"To these officers, the memes were funny, and anyone who took offense to them just couldn’t take a joke," the firm noted. "How does one account for this gaping blind spot, especially in the face of recent efforts by OPD to acknowledge implicit bias in policing and train officers to address it?"

Over the course of its six-month investigation, the firm interviewed 43 people, scoured 140 confiscated police cell phones and reviewed emails to make its findings.

Armstrong's media team did not immediately respond for comment on Wednesday, as an officer had been shot earlier in the morning.

KTVU has learned that the Oakland Police Department has seized as many as 100 city-owned phones belonging to officers who are part of its crime reduction teams. Sources say it has to do with sexist and racist comments made on a now-deleted Instagram account.

Some of these "jokes" were "overtly demeaning" to women and gender-conforming individuals, and others were derogatory to certain cultures or mocked police reforms, the firm found.

Last week, the city of Oakland announced that nine officers had been disciplined for engaging with the @crimereduction team account and "conduct that brings disrepute to OPD."

Punishment ranged from a 3-day to 25-day unpaid suspensions. The city did not state that anyone was fired.

The creator of the account, the firm uncovered, is a former Oakland police officer who was terminated in April 2020, two years after being involved in the fatal shooting of Joshua Pawlik. He created the Instagram handle the same month he was fired. He was not mentioned by name.

The scandal was unearthed in September 2020 to January 2021, during the tenure of Interim Police Chief Susan Manheimer.

Questions about the end of federal oversight

Civil rights attorney Jim Chanin is now wondering if the police department has come far enough along in its efforts to reform itself to be freed from federal oversight.

"I'm disappointed," Chanin told KTVU on Tuesday. "It raises serious questions about whether the department has really changed and if it's time to end the Negotiated Settlement Agreement."

While not named in the report, he is the person who brought the page to superiors' attention in December, about eight months after it was created.

In a previous interview at the end of August, Armstrong said he felt hopeful that the federal oversight could soon end, but he added that he realizes a lot of work needs to be done for that to happen.

"It's good to see that we're being recognized for the work that's being done, but we have not crossed the finish line and there's still more work to be done," he said at the time.

Less than a month ago, Chanin and colleague John Burris had both recommended the oversight should soon end. Both said they thought Armstrong's leadership was strong and that the department had evolved greatly in the last two decades.

Both Chanin and Burris represented plaintiffs in the infamous Riders case, where four officers were accused of allegedly kidnapping, planting evidence and beating citizens, which all came to light in 2000, when a rookie cop outed them.

Instead of going through a civil trial, the city and police department agreed to enter an agreement requiring federal oversight. Since 2003, the police department has had to check in with the civil rights attorneys and a federal judge to keep them accountable on almost 50 tasks. It costs Oakland taxpayers about $1 million a year for this oversight.

In light of this Instagram report, Chanin now said he has to have some more discussions with Armstrong to understand just how many high-ranking officers knew about the page and if the proper discipline was meted out to determine what his next steps will be.

But to be free of federal oversight, the judge has to sign off as well.

And it's unclear at this point what U.S. District Court Judge William Orrick will decide.

In a previous court hearing, Orrick said Oakland police will remain under court supervision until it "roots out officers who do not respect the people they serve and treat them equally."

Here is a timeline of how the Instagram scandal unfolded as laid out by the outside investigative firm, Clarence, Dyer & Cohen:

April 2020: The Instagram account, @crimereduction team, was created on April 25, 2020, the same month the creator of the account was fired from the Oakland Police Department for his connection to the fatal shooting of Joshua Pawlik two years priors. His name was not mentioned. He was no longer employed by the department when he began posting to the page.

September 2020: An Oakland police lieutenant was invited to join the page five months after it was created. He was concerned the invitation might be a trick, so he told a sergeant in the intelligence unit about it, wondering if the page could have been set up by either the Antifa movement or Black Lives Matter organizers.

Officers in the unit looked at the page and worried about posting information that could lead to leaks about the private information of police officers, but none saw the posts as worrisome to the integrity of the department. The sergeant of intelligence send a note to staff warning them to "only share information with trusted sources" and that following social media accounts could "reflect poorly on you."

No one above the rank of officer responded to the email. Neither did anyone from Internal Affairs.

December 2020: Officers in the intelligence unit periodically monitored the page until December, just to check whether it was still active. Another officer created a list of all the OPD officers who appeared to be following the page and found about 30 current or former officers. But this officer did not share the list with anyone. He also did not conduct a "systematic review of the page's content or notice anything offensive."

Facebook records indicate the page was taken down by Dec. 31, 2020, 10 days after The Oaklandside emailed the OPD media team to request a copy of a departmentwide email sent out about the @crimereductionteam. The public information officer told the reporter that the matter was still under investigation, when "in fact, there was no active investigation concerning the page at that time."

Reaction to the scandal from the mayor, to the police union to Judge William Orrick was harsh and swift.

Interim Chief Susan Manheimer and others decided to have the "integrity unit" look at the page, but because of the holidays and other assignments, no one addressed the issue until Jan. 8, 2021.

It was on that day that civil rights attorney Jim Chanin called Manheimer, saying he was in the possession of some "troubling images." The response from the intelligence sergeant was that the images on the page were "just dumb" and did not appear to constitute any violations.

On Jan. 13, Oakland police seized the cell phones of 140 officers.

February 2021: Armstrong was sworn in as police chief.

Lisa Fernandez is a reporter for KTVU. Email Lisa at lisa.fernandez@fox.com. Or call her at 510-874-0139. Or follow her on Twitter @ljfernandez