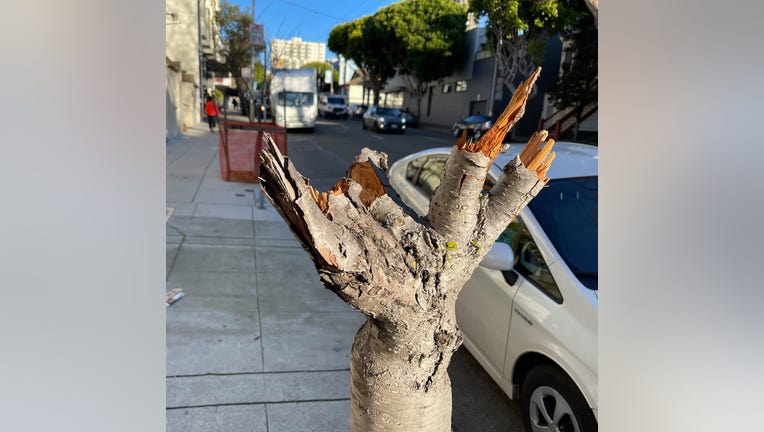 SAN FRANCISCO - A week after cherry blossom trees in San Francisco's Japantown were found vandalized, Supervisor Dean Preston and leaders from the city's Japanese community on Tuesday called for the trees to be replaced.

On Jan. 5, the Japanese Cultural and Community Center of Northern California took to Facebook to report that two trees outside their office, located in the 1800 block of Sutter Street, had been completely stripped of their branches, with just the trees' trunks left standing.

Surveillance footage shows the vandals destroying the tree over a period of three days, starting on New Year's Day, when the JCCCNC was closed. Police have said they're investigating the vandalism.

Preston, whose supervisorial district includes Japantown, introduced a resolution during Tuesday's Board of Supervisors meeting condemning the vandalism and declaring solidarity with the Japanese community. Additionally, Preston's resolution calls for the city to partner with Japantown leaders to replace or rehabilitate the trees.

"I am deeply concerned about what happened and am committed to ensuring that we develop a plan to bring back the famous cherry blossom trees," Preston said in a statement. "Now more than ever, we need to come together as a community."

"San Francisco has had a deep historical and cultural relationship with Japan for 160 years. Cherry blossom trees represent an important part of that cultural connection," JCCCNC Executive Director Paul Osaki said. "We look forward to working together with everyone to ensure that the cherry blossom trees return."

The vandalism isn't new, however. Two years ago, a different cherry blossom tree in the area was vandalized in a similar manner, JCCCNC officials said.

Cherry blossom trees play a significant role in Japanese culture and the ones in Japantown were planted in 1994 to commemorate the visit of the emperor and empress of Japan.

The recent vandalism occurred just months ahead of the famous annual Northern California Cherry Blossom Festival. The festival, which began in 1968, normally brings some 200,000 people into Japantown in the spring.

Due to COVID-19, the festival was canceled last year. This year, however, the festival will happen virtually for the first time on April 10, 11, 17 and 18.

"Even though the Cherry Blossom Festival will be remote, we still plan to celebrate the rich Japanese culture that exists and look forward to partnering with the City to ensure there is a plan to replace and rehabilitate the Cherry Blossom Trees," Eryn Kimura, an artist and member of the coalition Japantown for Justice.

More information about the upcoming festival can be found at www.sfcherryblossom.org.