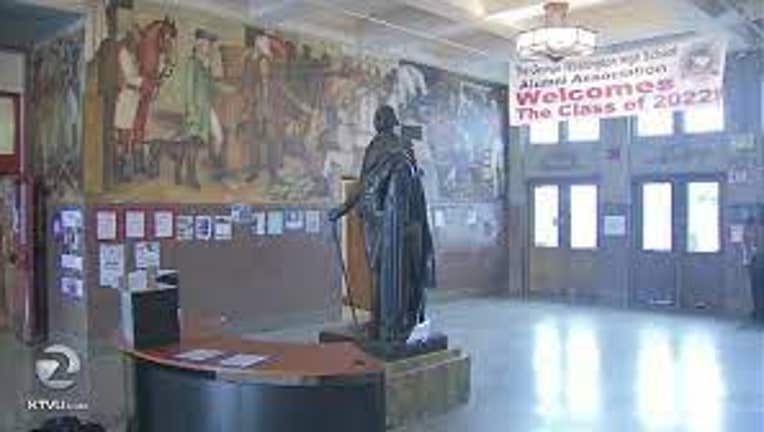 SAN FRANCISCO - A San Francisco Superior Court judge on Tuesday overturned a 2019 decision by the city's school district to cover up a controversial mural at George Washington High School.

The George Washington High School Alumni Association had filed a lawsuit following the 2019 vote by the San Francisco Unified School District Board of Education to remove the 1936 mural titled "Life of Washington" by Victor Arnautoff on the walls of the stairway and main lobby entrance at the Richmond District school.

The mural has been criticized as offensive for its depiction of Native Americans and African Americans.

The alumni association alleged in its lawsuit that the school board failed to follow the California Environmental Quality Act and conduct an environmental review when it made its decision to cover up the mural and Judge Anne-Christine Massullo agreed, saying in a ruling Tuesday that the board and SFUSD "failed in their primary duty to follow the requirements of the law."

Massullo scheduled a case management conference for Aug. 26 and asked for the two sides to agree on a date to schedule a status hearing in September, as well as to submit agreed-upon language to be used in preparing an environmental impact report so any future action by the board to remove the mural from view would comply with CEQA requirements.

A school district spokeswoman said Tuesday that the district was still reviewing the order.

Alumni association vice president Lope Yap Jr. said, "The court's comprehensive ruling in this important case speaks for itself," and added that the association "will continue to advocate for incorporation of these internationally recognized murals into the school curriculum."