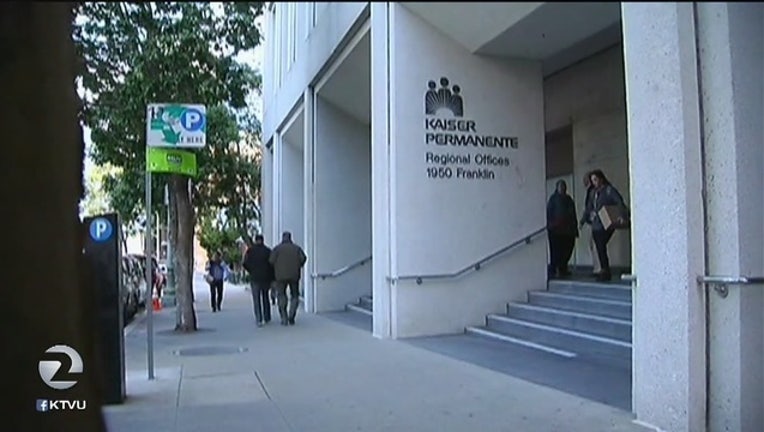 Chanting, "Up with the union, down with the bosses," and carrying signs with slogans such as, "Equality for Kaiser IT workers," union members circled the building, wearing T-shirts in the unions' signature purple.

"We want the same wages and benefits for 60 Inland Empire Kaiser IT workers as those of their counterparts 10 miles in each direction," said Patrick Cloney, a union member and lead IT worker at Kaiser in Fresno.

The "Inland Empire" refers to towns including Corona, Fontana and Riverside in Southern California, Cloney said. The counterparts to whom he referred are workers in Orange County and San Diego, he said.

SEIU-UHW has organized about 60 Kaiser Permanente desktop computer support employees who work in the Inland Empire in Southern California. The employees joined SEIU-UHW in February 2016. The group is bargaining with management over an initial contract.

Cloney said the 60 Inland Empire workers have been at the bargaining table with Kaiser management for two years, but "they're nickel and dimming them" with subpar wage and benefit proposals compared with those of their counterparts.

In response, "The only remaining dispute in bargaining is over wage scales. We currently pay these employees the market rate for computer desktop support workers in the Riverside/San Bernardino market," said John Nelson, a Kaiser Permanente spokesman.

"Their average wage is $34.97, or more than $72,000 annually. The union is demanding that these 60 employees be paid at a much higher rate, which would make them much more highly paid than similar workers in the same market. We have offered a generous increase but the union is demanding considerably more," Nelson said.