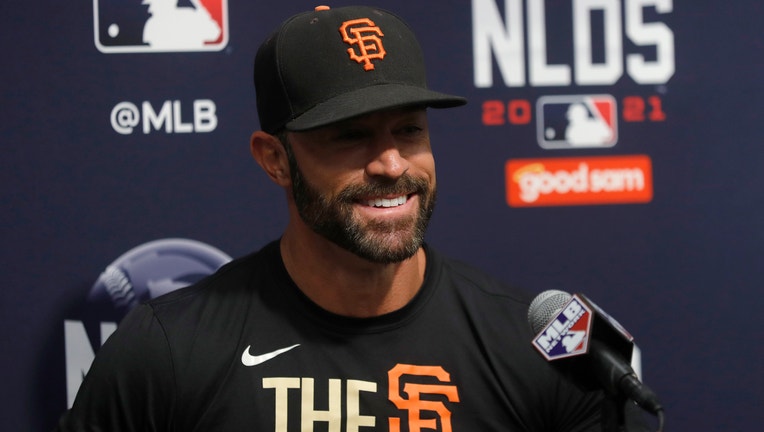 SAN FRANCISCO - Gabe Kapler won the National League's Manager of the Year award Tuesday night after guiding San Francisco to a franchise-best 107 victories in his second season with the Giants.

Kapler beat out Craig Counsell of the Milwaukee Brewers and Mike Shildt of the St. Louis Cardinals in the voting by members of the Baseball Writers' Association of America.

Kapler managed two seasons in Philadelphia before being fired. The Giants hired him after Bruce Bochy's retirement. Kapler had both big shoes to fill -- Bochy won three championships with San Francisco -- and a struggling team to take over. When the Giants went 29-31 in the pandemic-shortened 2020 season, it was their fourth straight losing record.

Then, in a year when the star-laden Dodgers and Padres were supposed to compete for NL West supremacy, San Francisco surged to the best record in baseball. The Giants beat out the Dodgers by a game for the division crown, although they lost to Los Angeles in a tightly contested Division Series.

Counsell finished second after leading the Brewers to the NL Central title. Shildt was third -- a month after he was fired over what Cardinals president John Mozeliak described as philosophical differences.

Brian Snitker of the Braves and Dave Roberts of the Dodgers were the other managers to receive votes.

Kapler received 28 of the 30 first-place votes, with Counsell and Shildt getting one apiece.

The AL Manager of the Year was to be announced later Tuesday night.