CHICAGO - There’s a predictability to action films these days, especially from the streaming houses. It’s as if the real priority is to pack as many references to other, more original films as possible into the time allotted — and that leaves little time for the original story. This tendency is so pervasive that some audiences are finding more entertainment in making up drinking games based on the recycled patterns than in the movies themselves.

Sadly, "Kate" does not depart from this trend.

About ‘Kate’: A thriller with a fatal ticking clock

"Kate," a near-future action thriller set entirely in Japan, tells the very familiar story of a conventionally attractive white woman assassin who survives childhood trauma only to become a killing machine for the State, for, well, some reason.

The titular character, played by Mary Elizabeth Winstead ("Scott Pilgrim vs. The World", "Birds of Prey"), receives her next order: to take out a high-ranking boss in a crime family. But when his daughter is unexpectedly present, she hesitates. Needing to finish the job, she pulls the trigger and unknowingly seals her own fate.

Almost a year later, she expresses to her handler Varrick — Woody Harrelson ("Natural Born Killers", "Zombieland"), as always, having a good time — that she wants to retire from the game and that this next mission will be her last.

Doubtful but supportive, he listens, and with that she enjoys a rare night of freedom in a luxe hotel bar where an attractive man named Stephen (Michiel Huisman) provides her with more than just conversation for the night.

As Kate prepares for the mission only hours later, something seems off. The mission is compromised by her suddenly shaky state, leading her to miss her target. Her pursuit leads to the hospital, where she learns she’s been fatally poisoned. With the introduction of this ticking clock, the true carnage begins as she works to figure out how she became the target. 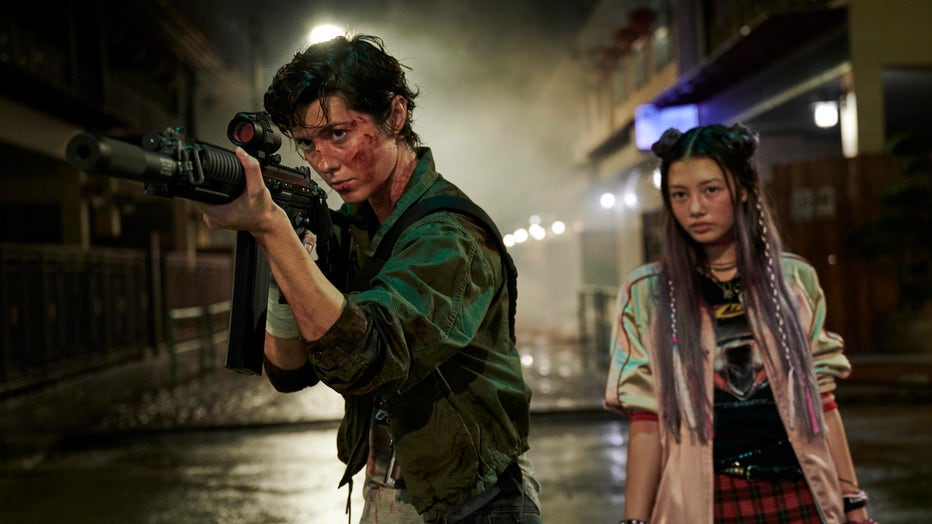 See ‘Kate’ for its slick style (and not much else)

With "Kate", director Cedric Nicolas-Troyan ("The Huntsman: Winter’s War") once again brings to life a story centered on an empowered woman. In instituting a ticking clock scenario, he imbues this film with a much-needed streak of originality. However, the film relies so heavily on the use of referential materials that it never quite finds its footing.

"Kate" is a mosaic of game-changing action films like "Blade Runner", "John Wick", "Old Boy", and most notably "Kill Bill." It offers a compelling visual landscape, but little else.

Winstead gives a stoic performance in the title role, very much in alignment with the audience’s expectation of what a traumatized female assassin would experience when pushed to go rogue — though beyond near-Terminator abilities, there isn’t much more to the character than her robotic front.

Winstead’s talent for portraying complex action characters was abandoned here, a missed opportunity given the thinness of the script. Only flashbacks scattered at random throughout the film reveal more about her relationship with Varrick, who raised her from childhood, but "Kate" cares much less about Kate than it does about whatever crazy kill she has in store for the next goon.

"Kate" also feels like a relic from the late 2000s, rather than a contemporary film, due to its uncritical approach to white female empowerment.

Kate is a badass, that’s undeniable. She is also, simultaneously, a white Westerner snatching mainly Japanese souls and shooting up their streets before acquiring a shakily-earned redemption arc by way of Ani (Miku Martineau). Ani is the daughter of the man Kate assassinated at the start of the film. Now, the essentially orphaned Ani (pun intended) carries on in clubs dressed as an angry teen in need of guidance.

After a bumpy start, she finds it with Kate, who she connects with on a variety of levels. But that connection doesn’t exonerate Kate, nor the film that bears her name. "Kate" presents the majority of Japanese characters as either villains or wise sages devoted to ancient traditions — a glaring misstep, given the conscious shift away from such tropes in recent years.

If you are looking for a film to enjoy solely based on the slickness of its world, or want to savor some de rigueur quick-cut fight scenes punctuated by interesting kills, then "Kate" has you covered. However, if you’re seeking an emotionally satisfying story or the gratification offered by the best revenge thrillers, you will find no satisfaction here.

But hey, it makes for a heck of a drinking game.

Get ready for ‘Kate’ with these free titles on Tubi

All About Nina (2018): Winstead stars in this excellent 2018 drama about a troubled standup comedian whose life is upended, for good and for ill, when she moves to Los Angeles and finds herself falling in love. A quick content note: "All About Nina" contains extended discussions about sexual assault. Written and directed by Eva Vives. Also features Common, Chace Crawford, Camryn Manheim, Jay Mohr, Clea DuVall, Beau Bridges and Mindy Sterling.

About the writer: Joyy Norris is a film programmer, writer and filmmaker based in Chicago. She has programmed with the Chicago International Film Festival and is a member of their Black Perspectives Committee. She is now the Operations and Programs Manager with Sisters in Cinema. Follow her on Twitter at @jdnorry.