Firefighters on the front line put to the test; Kincade Fire holds at 15% containment 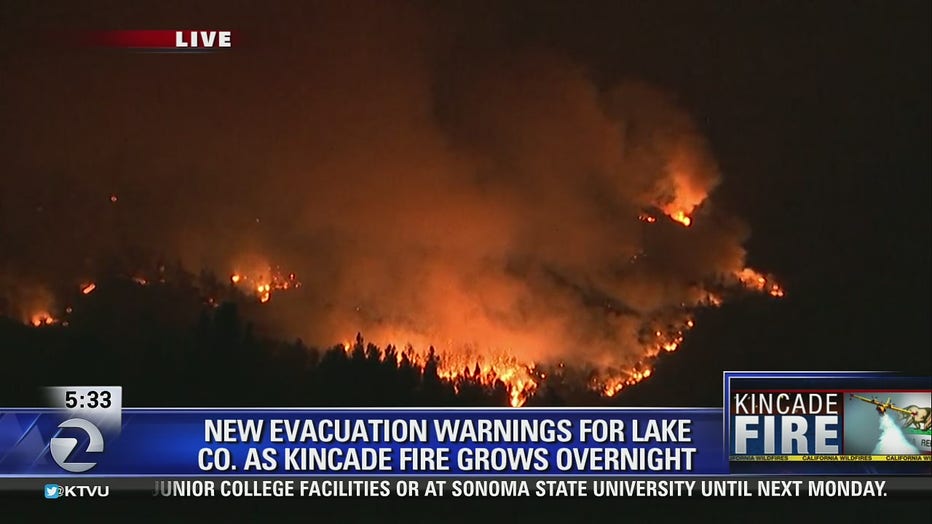 MIDDLETOWN, Calif. - The Kincade Fire on Tuesday pushed into Lake County, in addition to parts of Napa County and Sonoma County, where it first ignited six days ago, and officials warned that anyone who was already evacuated, likely isn't going home until the next wind event is over.

By 2:30 p.m. an evacuation order in the northern part of Dry Creek Valley, was reduced to an evacuation warning. Residents may return to their homes at their own risk.

New evacuation warnings were issued for parts of Lake County, as deep orange flames rose from the dark sky before sunrise. KTVU's cameras captured the fiery glow on the eastern side of Western Mine Road in Middletown early Tuesday morning.

Authorities said that residents living off Highway 29, Butts Canyon Road and Highway 175 were told to be on guard: They might have to leave at a moments notice. All schools in Lake County were closed on Tuesday.

In Napa County, Calistoga was under an evacuation advisory.

In Sonoma County, evacuation orders are still in place in Healdsburg and Sonoma, while residents living closer to the Pacific Ocean were advise to pack up and leave.

By Tuesday evening, the Kincade Fire, likely started by a PG&E transmission line that toppled in the wind, had scorched 76,138 acres and remained 15% contained.

More than 90,000 structures remain threatened and 189 have been destroyed; 86 of those were homes. There have been two firefighter injuries and zero civilian injuries or deaths.

Sonoma County Sheriff Mark Essick said at a Tuesday news conference that no one beside the 30,000 residents allowed back on on Monday should expect to "re-populate" on Tuesday because of the next 24 hours of expected wind gusts, which could reach up to 65 mph in some areas.

He said he knows that everyone's patience is being tested, but that it's still not safe to go back home.

Dwayne Dunne of Healdsburg and his family of four were on Day 3 of being evacuated. They were all staying at the Sonoma County Fairgrounds, where about 460 people were camped out as of Tuesday morning. He noted his one-month-old baby was freezing and they all are desperate to get home.

Paula Farve of Santa Rosa, who also had to evacuate, said simply: "I'm coping. The best I can."

Essick said during the evening news conference that there were three reports of looting in evacuated areas. There were no arrests made in what was described as "cold burglary reports."  Homes or businesses were apparently broken into, according to the sheriff and items were reported stolen. The sheriff's office is investigating.

CalFire spokesman Jonathan Cox said crews have two priorities now, which are structure protection and perimeter control. "We're in a battle rhythm," he said, referring to how the firefighters were faring.

As far as the weather is concerned and the winds, he said, "It's a critical 24-hour window," Cox said. "We're hoping it will ease off by midnight."

Winds were expected to gust up to 65 mph in higher elevations including the North Bay and East Bay hills, which meteorologists say are strong, but a far cry from the 93 mph peak winds that struck the Healdsburg hills on Saturday night.

Still, KTVU meteorologist Steve Paulson said this will be the third red flag warning in one week, which is very rare. "I can't remember it ever happening," he said.

After Wednesday afternoon, however, meteorologists say conditions will be much more calm for the next five to seven days, even though there is still no rain in sight.

As a result of this latest round of wind gusts, PG&E - for the fourth time in utility history - decided to turn off power again on Tuesday to prevent powerful winds from damaging its equipment and sparking more fires. Already two fires in Lafayette and the Kincade Fire are likely the result of fallen PG&E equipment.

The latest blackout will start early Tuesday and affect 605,000 customers - about 1.5 million people - in 29 Northern California counties. The announcement came even before the last blackout had ended, which shut power to more than 2.5 million people. It wasn't clear if power, that for many went out Saturday, would be restored before the next round of outages.