SAN FRANCISCO - Lawrence Ferlinghetti, the poet, publisher, bookseller and activist who helped launch the Beat movement in the 1950s and embody its curious and rebellious spirit well into the 21st century, has died at age 101. 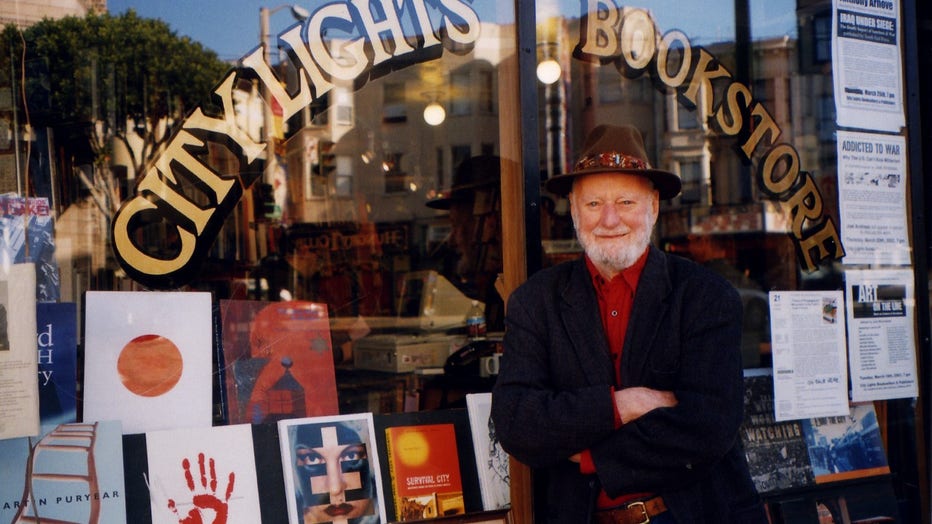 Lawrence Ferlinghetti, founder of City Lights Booksellers and Publishers in San Francisco died on Feb. 22, 2021. The poet and icon of the Beat movement was 101. (Stacey Lewis)

Ferlinghetti, a San Francisco institution, died Monday at his home, his son Lorenzo Ferlinghetti said. A month shy of his 102nd birthday, Ferlinghetti died "in his own room," holding the hands of his son and his son’s girlfriend, "as he took his last breath." The cause of death was lung disease. Ferlinghetti had received the first dose of the COVID vaccine last week, his son said Tuesday.

The staff at City Lights expressed its sadness over Ferlinghetti’s passing, saying in a statement, "For over sixty years, those of us who have worked with him at City Lights have been inspired by his knowledge and love of literature, his courage in defense of the right to freedom of expression, and his vital role as an American cultural ambassador. His curiosity was unbounded and his enthusiasm was infectious, and we will miss him greatly."

Few poets of the past 60 years were so well known, or so influential. His books sold more than 1 million copies worldwide, a fantasy for virtually any of his peers, and he ran one of the world’s most famous and distinctive bookstores, City Lights. Although he never considered himself one of the Beats, he was a patron and soul mate and, for many, a lasting symbol — preaching a nobler and more ecstatic American dream.

"Am I the consciousness of a generation or just some old fool sounding off and trying to escape the dominant materialist avaricious consciousness of America?" he asked in "Little Boy," a stream of consciousness novel published around the time of his 100th birthday

He made history. Through the City Lights publishing arm, books by Jack Kerouac, William S. Burroughs and many others came out and the release of Allen Ginsberg’s landmark poem "Howl" led to a 1957 obscenity case that broke new ground for freedom of expression.

He also defied history. The Internet, superstore chains and high rents shut down numerous booksellers in the Bay Area and beyond, but City Lights remained a thriving political and cultural outlet, where one section was devoted to books enabling "revolutionary competence," where employees could get the day off to attend an anti-war protest.

"Generally, people seem to get more conservative as they age, but in my case, I seem to have gotten more radical," Ferlinghetti told Interview magazine in 2013. "Poetry must be capable of answering the challenge of apocalyptic times, even if this means sounding apocalyptic." 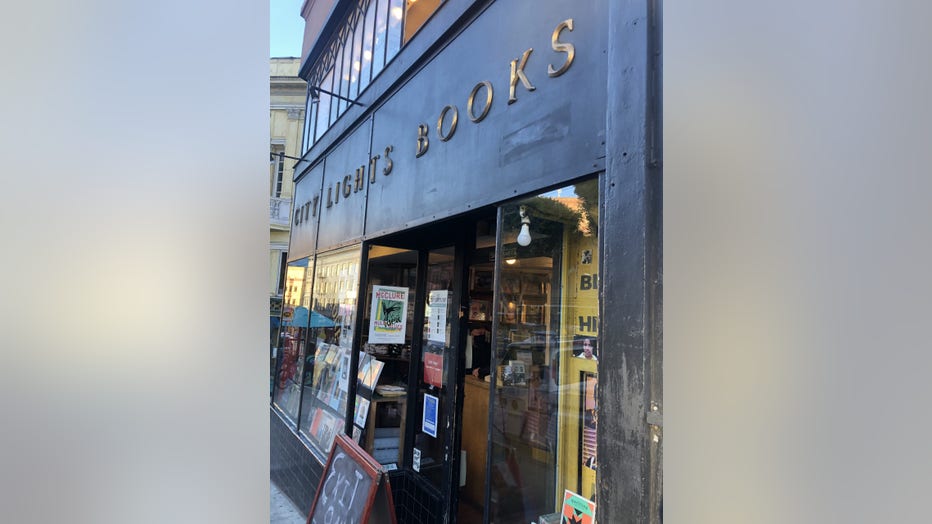 The store even endured during the coronavirus outbreak, when it was forced to close and required $300,000 to stay in business. A GoFundMe campaign quickly raised $400,000. 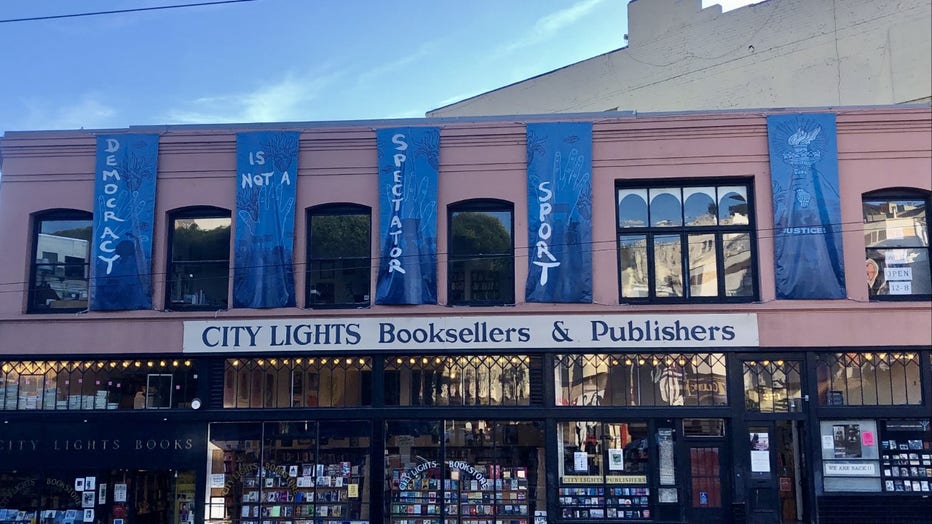 Ferlinghetti, tall and bearded, with sharp blue eyes, could be soft-spoken, even introverted and reticent in unfamiliar situations. But he was the most public of poets and his work wasn’t intended for solitary contemplation. It was meant to be recited or chanted out loud, whether in coffee houses, bookstores or at campus gatherings.

His 1958 compilation, "A Coney Island of the Mind," sold hundreds of thousands of copies in the U.S. alone. Long an outsider from the poetry community, Ferlinghetti once joked that he had "committed the sin of too much clarity." He called his style "wide open" and his work, influenced in part by e.e. cummings, was often lyrical and childlike: "Peacocks walked/under the night trees/in the lost moon/light/when I went out/looking for love," he wrote in "Coney Island." 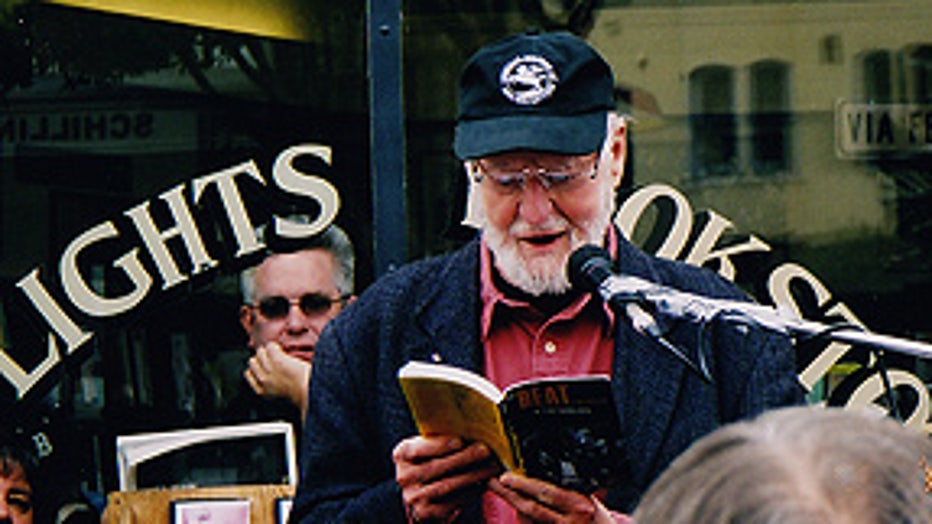 Ferlinghetti also was a playwright, novelist, translator and painter and had many admirers among musicians. In 1976, he recited "The Lord’s Prayer" at the Band’s farewell concert, immortalized in Martin Scorsese’s "The Last Waltz." The folk-rock band Aztec Two-Step lifted its name from a line in the title poem of Ferlinghetti’s "Coney Island" book: "A couple of Papish cats/is doing an Aztec two-step." Ferlinghetti also published some of the earliest film reviews by Pauline Kael, who with The New Yorker became one of the country’s most influential critics.

He lived long and well despite a traumatic childhood. His father died five months before Lawrence was born in Yonkers, New York, in 1919, leaving behind a sense of loss that haunted him, yet provided much of the creative tension that drove his art. His mother, unable to cope, had a nervous breakdown two years after his father’s death. She eventually disappeared and died in a state hospital.

Ferlinghetti spent years moving among relatives, boarding homes and an orphanage before he was taken in by a wealthy New York family, the Bislands, for whom his mother had worked as a governess. He studied journalism at the University of North Carolina at Chapel Hill, received a master’s in literature from Columbia University, and a doctorate degree from the Sorbonne in Paris. His early influences included Ernest Hemingway, Thomas Wolfe and Ezra Pound.

Ferlinghetti hated war, because he was in one. In 1945, he was a Navy commander stationed in Japan and remembered visiting Nagasaki a few weeks after the U.S. had dropped an atom bomb. The carnage, he would recall, made him an "instant pacifist."

In the early 1950s, he settled in San Francisco and married Selden Kirby-Smith, whom he divorced in 1976. (They had two children). Ferlinghetti also became a member of the city’s rising literary movement, the so-called San Francisco Renaissance, and soon helped establish a gathering place. Peter D, Martin, a sociologist, had opened a paperback store in the city’s North Beach section and named it after a recent Charlie Chaplin film, "City Lights." When Ferlinghetti saw the storefront, in 1953, he suggested he and Martin become partners. Each contributed $500.

Ferlinghetti later told The New York Times: "City Lights became about the only place around where you could go in, sit down, and read books without being pestered to buy something."

The Beats, who had met in New York in the 1940s, now had a new base. One project was City Lights’ Pocket Poets series, which offered low-cost editions of verse, notably Ginsberg’s "Howl." Ferlinghetti had heard Ginsberg read a version in 1955 and wrote him: "I greet you at the beginning of a great career. When do I get the manuscript?" a humorous take on the message sent from Ralph Waldo Emerson to Walt Whitman upon reading "Leaves of Grass."

Ferlinghetti published "Howl and Other Poems" in 1956, but customs officials seized copies of the book that were being shipped from London, and Ferlinghetti was arrested on obscenity charges. After a highly publicized court battle, a judge in 1957 ruled that "Howl" was not obscene, despite its sexual themes, citing the poem’s relevance as a criticism of modern society. A 2010 film about the case, "Howl," starred James Franco as Ginsberg and Andrew Rogers as Ferlinghetti.

Ferlinghetti’s eyesight was poor in recent years, but he continued to write and to keep regular hours at City Lights. The establishment, meanwhile, warmed to him, even if the affection wasn’t always returned. He was named San Francisco’s first poet laureate, in 1998, and City Lights was granted landmark status three years later. He received an honorary prize from the National Book Critics Circle in 2000 and five years later was given a National Book Award medal for "his tireless work on behalf of poets and the entire literary community."

"The dominant American mercantile culture may globalize the world, but it is not the mainstream culture of our civilization," Ferlinghetti said upon receiving the award. "The true mainstream is made, not of oil, but of literarians, publishers, bookstores, editors, libraries, writers and readers, universities and all the institutions that support them."

In 2012, Ferlinghetti won the Janus Pannonius International Poetry Prize from the Hungarian PEN Club. When he learned the country’s right-wing government was a sponsor, he turned the award down.

"We intend to build on Ferlinghetti’s vision and honor his memory by sustaining City Lights into the future as a center for open intellectual inquiry and commitment to literary culture and progressive politics," City Lights staff shared. "Though we mourn his passing, we celebrate his many contributions and give thanks for all the years we were able to work by his side."

Officials with the bookstore said that plans for a public memorial would be announced in the coming weeks.