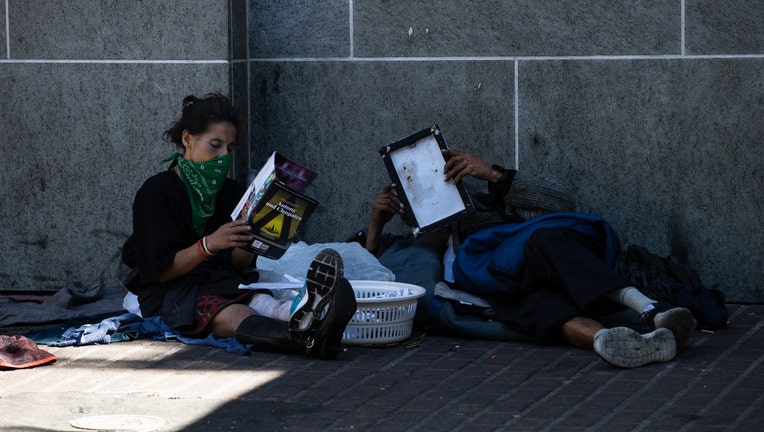 SAN FRANCISCO - Homeless people and their advocates sued the city of San Francisco on Tuesday, demanding that it stop harassing and destroying the belongings of people living on the streets with nowhere to go, and with the goal of forcing the city to spend billions of dollars on affordable homes that will keep residents housed.

The Lawyers' Committee for Civil Rights of the San Francisco Bay Area and others filed the lawsuit in federal court on behalf of the Coalition on Homelessness and seven individuals who are homeless or at risk of becoming homeless. Defendants include the city, several city departments and Mayor London Breed.

The complaint states that San Francisco "presents the image of a caring municipality" with a plan to address homelessness, but decades of inaction on affordable housing has left thousands forced to use tents and vehicles as shelter. An annual homelessness survey found 7,754 homeless people in 2022 with nearly 60% living unsheltered.

Not only has the city failed to construct affordable housing, according to the complaint, the city uses heavy-handed tactics to get homeless people to move, threatening to arrest or actually arresting people, and taking people's belongings in early morning encampment sweeps in which shelter is not offered, as required by law.

In addition to stopping illegal practices, "we need to change the conversation around what is causing homelessness here and get to proven solutions," said Zal K. Shroff, senior attorney with the lawyers’ committee.

San Francisco is among many West coast cities where street homelessness has come increasingly under fire, from politicians and housed residents. California Gov. Gavin Newsom, a Democrat and former mayor of San Francisco, has embraced clearing tent encampments, saying it is neither compassionate nor safe to allow people to live outdoors.

But the U.S. Court of Appeals for the Ninth Circuit ruled in 2018 that it's unconstitutional to cite or arrest people for sleeping in public when there is no shelter available.

The complaint states that San Francisco "presents the image of a caring municipality" with a plan to address homelessness, but decades of inaction on affordable housing has left thousands forced to use tents and vehicles as shelter.

"Once we are served with the lawsuit, we will review the complaint and respond in court," said Jen Kwart, spokesperson for the office of City Attorney David Chiu.

Shroff acknowledged the court can’t order San Francisco to build affordable housing, but the group hopes the lawsuit will push city leaders in that direction.

The lawsuit asks the court to order the city to stop punishing homeless people for sleeping and living on public property until it has sufficient shelter to offer. It also asks the court to stop the city from seizing property and to appoint a monitor to make sure the city follows through. 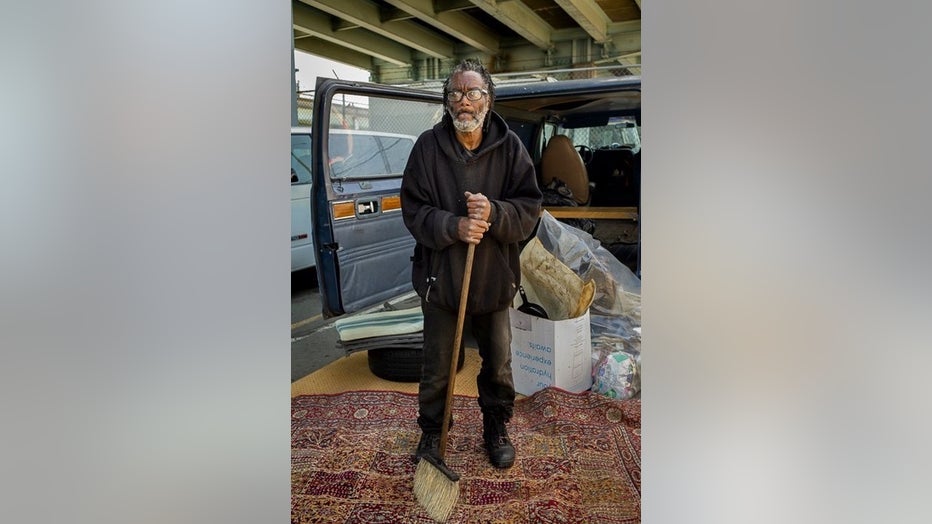 Greg Smith, 67, lives at the Merlin Street homeless encampment in San Francisco, where authorities plan to evict residents on Monday, May 17, 2021 (Photo courtesy of the Coalition on Homelessness).

The seven named plaintiffs include David Martinez, a Latino man who sleeps in a cardboard box because city workers keep confiscating his tent and other belongings, according to the complaint.

Two of the plaintiffs are Black men unable to afford housing in the city where they were born and raised. Another is a double amputee whose prosthetics were taken by city workers in June.

Toro Castaño said in a legal declaration that in August 2020 he packed his belongings as ordered but city workers tossed all his stuff into a garbage truck, including his mother’s wedding kimono and a MacBook Pro laptop. They offered him a bed in a homeless shelter, which he declined for fear of catching the coronavirus.

"I do not think it was fair to force me to make that difficult healthcare choice under the threat of citation," said Castaño, who is also Latino, in his declaration.

The city does not give 72 hours notice in advance of clearing an area or bag and tag property for homeless people to collect later, in violation of its own policies, according to the complaint. Homeless outreach workers do not know until hours after people have been forced out what kind of shelter, if any, is available that day.

"No one is saying the city should not remove trash, but when we’re seeing MacBook Pros, that’s just straight up targeting of unhoused people," Shroff said.

San Francisco has about 3,500 shelter beds, the mayor's office said.

The lawsuit estimates San Francisco would need to build nearly 6,700 new affordable units, which they estimate to cost $4.8 billion, to house every person currently unhoused in San Francisco.