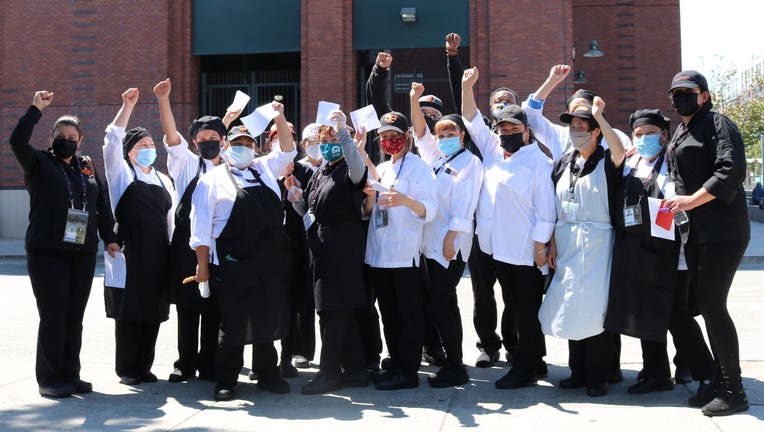 SAN FRANCISCO - Concession workers at Oracle Park are not expected to strike, now that union leaders have reached an agreement with the food service contractor for the San Francisco Giants.

Unite Here Local 2 and Bon Appetit agreed on COVID safety, health care issues, wages and more, according to a news release issued early Wednesday by union officials. Members will vote Thursday on the new agreement, which runs through March 2024.

Nearly 97% of union members had voted Sept. 4 to authorize a strike.

Union officials had alleged that although food service contractor Bon Appetit Management assured the workers that Oracle Park would be a safe environment when it reopened at full capacity in June, indoor mask mandates and social distancing protocols were not being enforced at the park, including at concourse concession stands and private suites.

With mask requirements allegedly going unenforced and an uptick in COVID-19 cases, the workers demanded hazard pay of an extra $3 per hour.

According to the union, the new agreement includes a commitment to enforce mask requirements, increased health benefits, an immediate $3/hour raise with additional increases by 2024 totaling $7/hr, and increased pension benefits.

"In my 32 years working food service at Giants games, I’ve been witness to so much history – World Series championships, Barry Bonds’ home runs, and more – and now we’ve made history too," said Deborah Torrano, a suite attendant at Oracle Park and Unite Here Local 2 negotiating committee member. "This deal will help us be safer on the job, support our families in the Bay Area, get medical care without worrying about the bill, and retire with dignity. We were ready to strike, and now our lives will change."

The agreement comes following the Giants clinching a position in the playoffs.

"Ballpark workers' fierce, determined leadership has paid off," said Anand Singh, president of Unite Here Local 2. "Workers got organized and were ready to strike for their safety, health care, and wages, and the deal we won will transform food service jobs at Oracle Park and change the lives of almost 950 workers. Bon Appetit has stepped up and set an industry standard for safe, family-sustaining jobs, and I want to thank Bon Appetit CEO Fedele Bauccio and VP Operations at Oracle Park Bill Greathouse for their partnership."