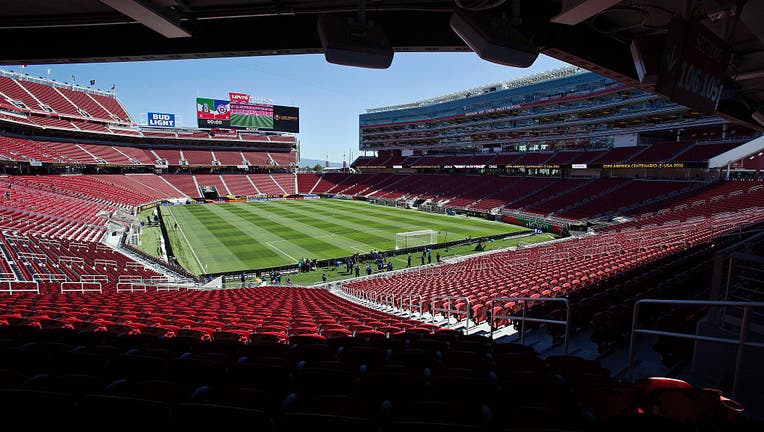 SANTA CLARA, CALIFORNIA - JUNE 18 A general view of the Levi's Stadium before a Quarterfinal match between Mexico and Chile as part of Copa America Centenario US 2016 on June 18, 2016 in Santa Clara, California, US. (Photo by Brian Bahr/LatinContent

The World Cup is coming to the Bay Area in 2026 when some matches will be played in Santa Clara at Levi's Stadium.

The US, Canada and Mexico are hosting the quadrennial soccer tournament. Host cities in the three countries were announced Thursday by FIFA.

Levi's Stadium is the home field for the San Francisco 49ers.

Some of the other venues where games will be played include SoFi Stadium in Los Angeles County, the Estadio Azteca in Mexico City and MetLife Stadium in New Jersey.

FIFA announced Santa Clara’s Levi Stadium will host some games there during the 2026 World Cup.

Santa Clara was one of the host cities once before back in 1994.

Santa Clara Mayor Lisa Gillmore says she wrote a letter to FIFA asking to host the games back in 2016. Now she and the entire city is celebrating the selection

"I’m ecstatic! I’m so excited about it. I’m a soccer mom myself, so I just can’t wait to see what teams we get and to have the world come to Santa Clara," Gillmore said.

Santa Clara knows how to host a major sporting event. Levi Stadium is home to the San Francisco 49ers and hosted Super Bowl 50 in 2016. Gillmore says she’ll know just how many games they’ll host sometime soon and the economic impact the World Cup will bring to Santa Clara.

"I expect our hotels and our restaurants and sales tax and hotel tax to really go through the roof during this two or three-week period. Pretty tremendous, probably at least double the Super Bowl," Gillmore said.

Gillmore says more children in Santa Clara play soccer than any other sport and the games will be the perfect opportunity for them to see their favorite players in person. One soccer fan says the game is slowly becoming more popular in the U.S.

"So I definitely think it’s making strides and getting to the value it has in other places. But definitely, I feel it’s one of the best games so definitely a positive thing that it’s coming here," said soccer fan Savan Vietla.

Santa Clara is home to nearly 130,000 people and Gillmore says residents can expect some streets near Levi Stadium to be temporarily closed off during the games. People from all over the world will come to Santa Clara and that’s exactly what soccer fans are looking forward to.

"The whole city will be full of futbol fans so definitely a great place to be," Vietla said.