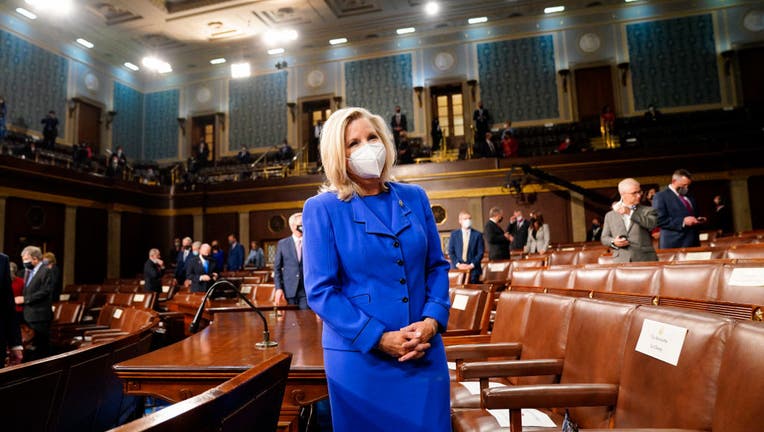 Representative Liz Cheney (R-WY) waits for the arrival of President Joe Biden, before he addresses a joint session of Congress at the US Capitol in Washington, DC, on April 28, 2021.

WASHINGTON - A combative Rep. Liz Cheney lashed out at leaders of her own Republican Party late Tuesday, accusing former President Donald Trump and his GOP supporters of following a path that would "undermine our democracy."

On the eve of a closed-door meeting when House Republicans seem certain to oust her from a leadership post because of her clashes with the former president, Cheney, R-Wyo., took to the House floor to state her case.

"I will not sit back and watch in silence while others lead our party down a path that abandons the rule of law and joins the former president's crusade to undermine our democracy," Cheney said.

She did not mention party leaders by name. But House Minority Leader Kevin McCarthy, R-Calif., and No. 2 House Republican Steve Scalise, R-La., have called for her removal after she repeatedly rejected Trump's false claim that he lost the November election due to widespread fraud, and for his role in encouraging supporters who stormed the Capitol on Jan. 6.

"Today, we face threat America has never seen before," she told the nearly empty House chamber. "A former president who provoked a violent attack on this Capitol, in an effort to steal the election, has resumed his aggressive effort to convince Americans that the election was stolen from him. He risks inciting further violence."

Top Republicans have asserted their chief objection has been that as No. 3 House GOP leader, Cheney should be focusing on messages that would help the party win House control in next year's elections, not on internal party divisions over the former president.