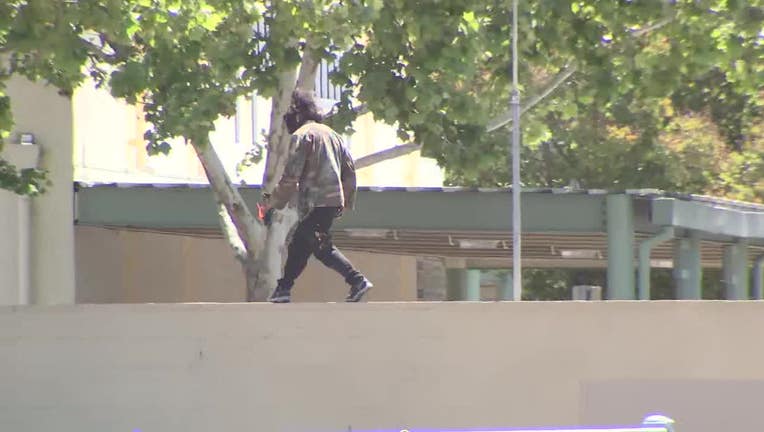 San Jose, CA - A tense, hours-long standoff between San Jose police officers and a man armed with a knife unfolded at an elementary school on Wednesday.

The drama was resolved peacefully, but there had been a lockdown on the campus of Empire Gardens Elementary School, on North 21st and East Empire streets in San Jose.

Parents began picking up their kids at the school a little bit later than the normal 1:50p.m. dismissal time. Still, San Jose police said the ordeal ended the way they wanted.

The trouble started just after 11 a.m.

A man described as despondent and armed with a knife showed up at a San Jose elementary school, police said, prompting a shelter-in-place. Jesse Gary reports

"Behind this school, there is a creek, which is known to have a lot of homeless people," said area neighbor Vicky Carlos.

Others said the man, appeared to be unhoused and suffering a mental health episode. They said he walked onto the campus of 300 students with an 18-inch knife and began swinging the weapon, and shouting incoherently in Spanish.

"Concerns are (for the) students. School is in session. Right now every possible resource we have is here dealing with this individual," said Camarillo.

The school was placed on lockdown, with the K-thru-5th grade students kept in their classrooms. Administrators notified some parents of the ongoing threat by phone.

"And the office called me for my daughter, don’t come in today. Because that guy has the knife," said parent Marlo Sarantes, as he stood with his kindergarten-aged daughter and watched the events from a nearby sidewalk.

Uniformed police officers surrounded the man, while members of the police mobile crisis assessment team started talking to him for hours.

"Ah, not too worried. I mean there are plenty of police around. So, that’s what they’re trained for. So I’m not that worried about it," said parent Elaina Ornelas, as she waited in her SUV near school grounds.

Police crisis specialists, as well as county clinicians, continued negotiating with the man – using a bullhorn, to eventually convince him to put the knife down, and surrender. Officials said this deployment worked to perfection.

"We don’t want to force a confrontation. We want a peaceful resolution," said Camarillo.

The man is being held on the misdemeanor charge of brandishing a deadly weapon on school grounds. He’ll undergo a mental health evaluation, to determine his long-term needs.