The Administrator of NOAA, and staff members, visited the Marine Mammal Center in the Marin Headlands. They came to see the operation, an important step in securing funding for several critical programs, that could be defunded by the new Congress.

MARIN COUNTY, Calif. - National Oceanic and Atmospheric Administration (NOAA) weather forecasters, as well as researchers and stewards of climate, coastlines, navigation, fisheries and earth observation from space came to the Marin Headlands to see how the funds it grants to Marine Mammal Center serve the planet. But, the Center's activities may be hampered by a much different kind of Congress.

The Administrator of NOAA, and staff members, visited the Marine Mammal Center in the Marin Headlands. They came to see the operation, an important step in securing funding for several critical programs, that could be de-funded by the new Congress.

"I think Congress is gonna ask us some questions about value, priorities and that's completely appropriate, and we've got some good answers for them," said NOAA Administrator Richard Spinrad.

Center CEO Cecily Majerus says part of the Federal funds go to support a network of marine mammal rescue groups along the entire U.S. West Coast and Hawaii. bringing in sick or disabled seals, sea lions, sea otters and their pups. "They pick the animals up and bring them to our hospital. They're 're sort of the ambulance system and bring them in and protect them here give them the care they need so they can go back," said Marine Mammal Center CEO Cecily Majerus.

Dolphin sickness and whale entanglements are handled in the field. For those who do not survive, NOAA funds serious research of the dead animals finding cancer now in one in four sea lions. "We're finding cancer in California sea lions. We see toxicity in these animals. We see infective diseases," said Marine Mammal Center External Relations Officer Jeff Boehm.

Some of this research, assists human researchers and doctors to find human solutions. "Since the Marine Mammal Protection Act was passed 50 years ago, we have not lost a single marine mammal species in U.S. waters," said Spinrad. 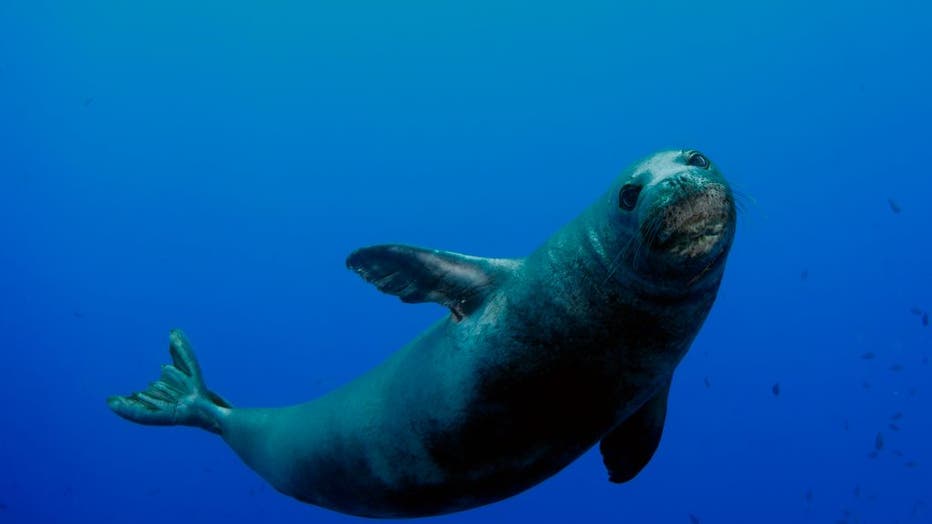 In fact, some species, including endangered ones, are increasing in population. "This is their ocean. This is where we want to make it better So we can all thrive; both the mammals that live in the ocean and those of us who use the ocean," said CEO Majerus. "To make sure that we are leaving a healthier planet than we inherited." said Mr. Boehm. "At a cost of sex cents per U.S. taxpayer per day," said Spinrad.

For millennia, sea mammals have survived, weather, predators, famine and natural disease. But without private organizations such as the Marine Mammal Center and NOAA with the force of law, they might not survive human pollution and environmental destruction.