1-2% of bugs lost every year due several factors, scientists say

Scientists worry that the world is losing about 1% or 2% of its insects each year.

MEXICO CITY (AP) - The number of monarch butterflies that showed up at their winter resting grounds in central Mexico decreased by about 26% this year, and four times as many trees were lost to illegal logging, drought and other causes, making 2020 a bad year for the butterflies.

The government commission for natural protected areas said the butterflies’ population covered only 2.1 hectares (5.2 acres) in 2020, compared to 2.8 hectares (6.9 acres) the previous year and about one-third of the 6.05 hectares (14.95 acres) detected in 2018.

RELATED: Study: Climate change contributes to the spread of certain diseases through mosquitoes

Because the monarchs cluster so densely in pine and fir trees, it is easier to count them by area rather than by individuals.

Gloria Tavera, the regional director of Mexico's Commission for National Protected Areas, blamed the drop on "extreme climate conditions," the loss of milkweed habitat in the United States and Canada on which butterflies depend, and deforestation in the butterflies' wintering grounds in Mexico. 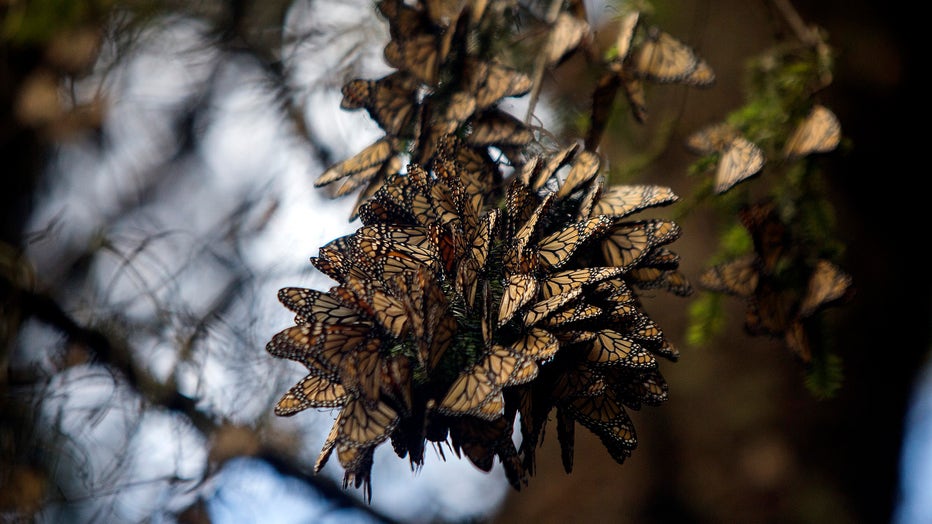 Jorge Rickards of the WWF environmental group acknowledged the lost trees were a blow, but said "the logging is very localized" in three or four of the mountain communities that make up the butterfly reserve.

In addition, wind storms, drought and the felling of trees that had fallen victim to pine beetles or disease, caused the loss of another 6.9 hectares (17 acres) in the reserve, bringing the total forest loss in 2020 to 20.65 hectares (51 acres). That compares to an overall loss of about 5 hectares (12.3 acres) from all causes the previous year.

Tavera said the drought was affecting the butterflies themselves, as well as the pine and fir trees where the clump together for warmth.

"The severe drought we are experiencing is having effects," Tavera said. "All the forests in the reserve are under water stress, the forests are dry."

RELATED: Paris Climate Agreement: What it is, how it started and what happens now that the US has rejoined

"The butterflies are looking for water on the lower slopes, near the houses," she noted.

Tavera also expressed concern about the sever winter storms in Texas, which the butterflies will have to cross — and feed and lay their eggs — on their way back to their northern summer homes in coming months.

"This is a cause for worry," Tavera said, referring to whether the monarchs will find enough food and habitat after the winter freeze.

It was also a bad year for the mountain farming communities that depend for part of their income on tourists who visit the reserves. Because of the coronavirus pandemic, visits fell from around 490,000 last year, to just 80,000 in the 2020-2021 season.

Environmentalist and writer Homero Aridjis, who grew up around the reserve, said the decline in butterflies and rise in logging was not surprising, given the reduction in Mexican government funding for protected natural areas and environmental work.

"While the reserves were closed to tourism during practically the whole (winter) season, the way was open for loggers, with no control," Aridjis said. "The question is, can the monarch migration survive this environmental negligence?"

The U.S. group Center for Food Safety called for the monarchs to be granted endangered species protection, noting "the minimum population threshold needed to be out of the danger zone of extinction is six hectares."

It was unclear whether the drop in tourism income contributed to the increased logging. Rickards said there has long been pressure on the area's forests from people who want to open land for planting crops.

Felipe Martínez Meza, director of the butterfly reserve, said there have been attempts to plant orchards of avocados — hugely profitable crop for farmers in the area — in the buffer zones around the reserve.

The high mountain peaks where the butterflies clump in trees are probably a bit above the altitude where avocado trees like to grow, Martinez Meza said. But the buffer zones provide protection and support for the higher areas, and he said more must be done to combat the change in land use.

Frequently, illegal logging is carried out by outsiders or organized gangs, and not by the farm communities that technically own the land.

Loss of habitat, especially the milkweed where the monarchs lay their eggs, pesticide and herbicide use, as well climate change, all pose threats to the species’ migration.

While there was plenty of bad news for the butterflies — very few showed up to some historic wintering sites like Sierra Chincua — there was the welcome news that a new wintering site was discovered nearby, in a mountaintop near the Lagunas de Zempoala protected area, near Mexico City.

Tavera said the wintering site had always been there, but was so difficult to reach that it wasn't discovered until earlier this month.