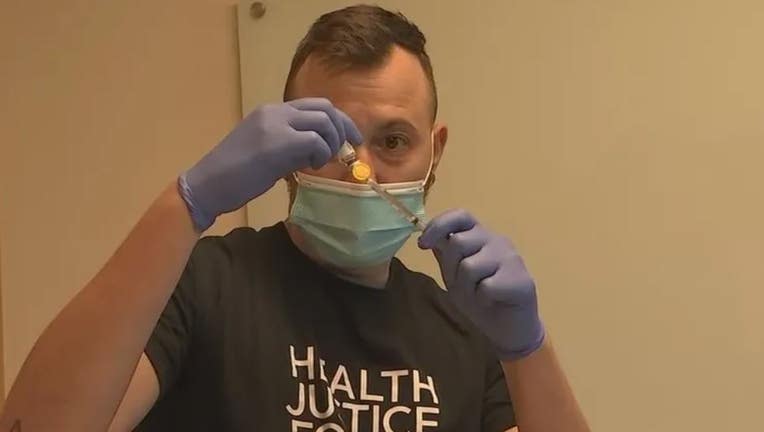 SAN JOSE, Calif. - New guidance from the U.S. Food and Drug Administration makes more of the monkeypox vaccine available as a shortage of doses continues amid an outbreak of the infectious disease.

The FDA has approved administering one-fifth of the Jynneos vaccine vial as a way to stretch the amount of available doses.

Doctors with Santa Clara Valley Medical Center spoke about the new process on Friday at a vaccine clinic in San Jose.

"This was approved by the FDA based on a study that was done a few years ago in preparation for this exact scenario; a possible outbreak of monkeypox that would require dose sparing or stretching few doses to as many people as possible," said Dr. Jennifer Tong, associate medical chief officer for Santa Clara Valley Medical Center.

Doctors say people getting the injection this way are showing an immune response just as strong as the response people experienced after getting a full dose.

House Speaker Nancy Pelosi hosted a San Francisco town hall on monkeypox earlier this week. The meeting addressed the vaccine shortage and the disproportionate impact of the disease on LGBTQ communities, particularly men who have sex with men.

San Francisco's health officer indicated at that time that the dosage amount of the two-dose vaccine would depend on future allocations of the vaccine. On Friday San Francico Department of Public Health confirmed they too would be shifting to the one-fifth dose to be administered through intradermal injection.

Health officials have already said they are prioritizing the first dose and would defer second doses until supply increases.

Also of concern to those who called in to the town-hall meeting was the evolving isolation guidelines for monkeypox. "We consider someone transmissible with monkeypox virus, from the onset of symptoms, to until after the rash has scabbed off, fallen off, and new skin is underneath," said infectious disease expert Dr. Peter Chin-Hong of UCSF Health.

Chin-Hong warned that the virus can still be spread by sex for two to three months after any visible symptoms are gone. He advised anyone who has contracted the virus to use protection during sex.

California Department of Public Health updated their isolation guidance for the general public on Thursday. In their section on resuming normal activities, they say evidence of transmission through genital excretion is lacking and recommend condoms during sex for 12 weeks after infection. Health officials are still trying to understand if the monkeypox virus remains in semen and can be spread through sex even after lesions are healed.

There are also updated guidelines for returning to work and high-risk settings are defined. You can read the full updated state guidance here.

San Francisco accounts for about a third of the state's confirmed and suspected monkeypox cases. As of Friday there are 638 confirmed or probable cases in the city. The U.S. currently has more than 14,000 cases.

The walk-in vaccine clinic at Zuckerberg San Francisco General Hospital, which had once seen frustration with long lines and patients being turned away, has improved this week with no line being reported on more than one occasion. In addition, the clinic has managed to open daily until supply has been exhausted. The next available walk-in clinic is Monday, Aug. 22 through Aug. 26 from 8 a.m. to 4 p.m.