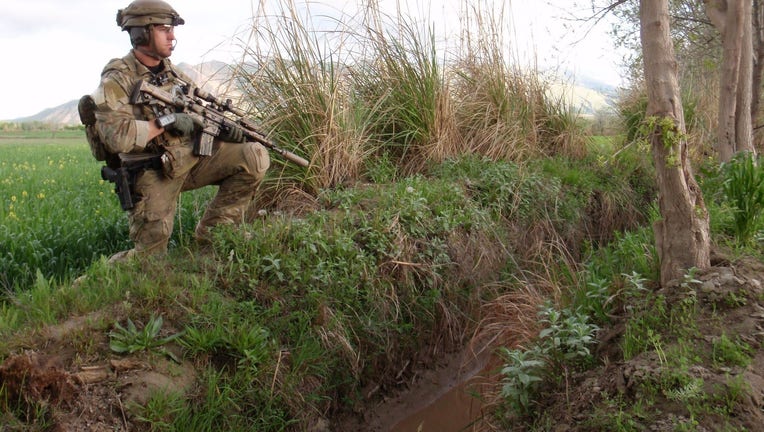 Then-Staff Sgt. Thomas "Patrick" Payne pulls security while on a deployment in Afghanistan in 2010.

BRUSSELS - NATO could pay a heavy price for leaving Afghanistan too early, its chief warned Tuesday after a U.S. official said President Donald Trump is expected to withdraw a significant number of American troops from the conflict-ravaged country in the coming weeks.

NATO has fewer than 12,000 troops from dozens of nations in Afghanistan helping to train and advise the country's national security forces. More than half are not U.S. troops, but the 30-nation alliance relies heavily on the United States for transport, air support, logistics and other assistance. It's unlikely that NATO could even wind down its operation without U.S. help.

"We now face a difficult decision. We have been in Afghanistan for almost 20 years, and no NATO ally wants to stay any longer than necessary. But at the same time, the price for leaving too soon or in an uncoordinated way could be very high," NATO Secretary-General Jens Stoltenberg said in a statement Tuesday.

He said Afghanistan still "risks becoming once again a platform for international terrorists to plan and organize attacks on our homelands. And ISIS (Islamic State) could rebuild in Afghanistan the terror caliphate it lost in Syria and Iraq."

The U.S. decision comes just days after Trump installed a new slate of loyalists in top Pentagon positions who share his frustration with the continued troop presence in war zones. The expected plans would cut U.S. troop numbers almost in half by Jan. 15, leaving 2,500 troops in Afghanistan.

U.S. officials said military leaders were told over the weekend about the planned withdrawal and that an executive order is in the works but has not yet been delivered to commanders.

House Speaker Nancy Pelosi criticized the Trump administration's plan in a statement, calling it "hasty" and that it lacked strategy.

“Our military and allies deserve strong, smart and strategic leadership to protect America’s security and that of the region," Pelosi said. "America went into Afghanistan with NATO, and it is concerning that Trump’s withdrawal is being carried out without the close and comprehensive coordination of NATO. It is important to note that NATO is a key partner contributing over half of the troop presence in Afghanistan."

Pelosi added, "We always want to bring our troops home and look forward to welcoming them back to American shores safely as soon as possible.”

NATO took charge of the international security effort in Afghanistan in 2003, two years after a U.S-led coalition ousted the Taliban for harboring former al-Qaida leader Osama bin Laden. In 2014, it began to train and advise Afghan security forces, but has gradually pulled troops out in line with a U.S.-brokered peace deal.

Stoltenberg said that "even with further U.S. reductions, NATO will continue its mission to train, advise and assist the Afghan security forces. We are also committed to funding them through 2024."

NATO's security operation in Afghanistan is its biggest and most ambitious undertaking ever. It was launched after the military alliance activated its mutual defense clause -- known as Article 5 -- for the first time, mobilizing all the allies in support of the United States in the wake of the 9/11 attacks on New York and Washington.

"Hundreds of thousands of troops from Europe and beyond have stood shoulder to shoulder with American troops in Afghanistan, and over 1,000 of them have paid the ultimate price," Stoltenberg said.

"We went into Afghanistan together. And when the time is right, we should leave together in a coordinated and orderly way. I count on all NATO allies to live up to this commitment, for our own security," he said.

The United States is by far NATO's biggest and most influential ally. It spends more on defense than all the other countries combined. But Trump's term in office has marked a particularly tumultuous time for the organization. He has routinely berated other leaders for not spending enough on defense, and has pulled out of security agreements that European allies and Canada consider important for their security, such as the Iran nuclear deal and the Open Skies aerial surveillance pact.

French President Emmanuel Macron said last year that NATO was suffering from "brain death," in part due to a lack of U.S. leadership.

Stoltenberg has refrained from publicly criticizing Trump or his decisions since Trump came to power in 2016.