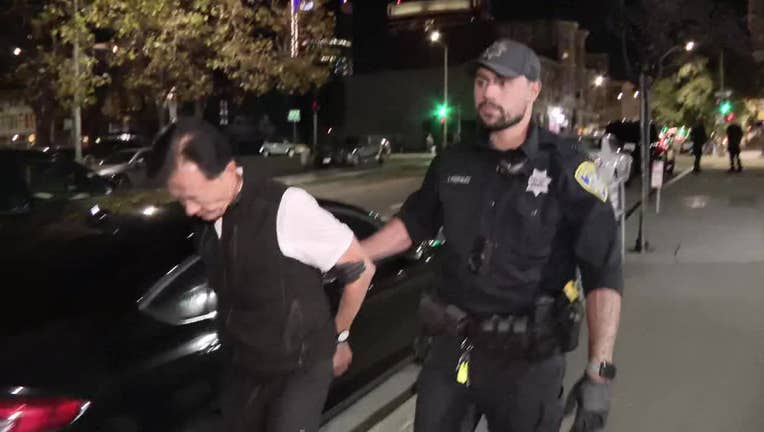 DUBLIN, Calif. - The 73-year-old man arrested for allegedly hiring a hitman to kill his girlfriend died by suicide within hours of being taken to Santa Rita Jail by hanging himself with a T-shirt, KTVU has learned.

Nelson Peter Chia was found by deputies on Oct. 28 at 2:08 p.m. with a shirt tied around his neck and the doorknob of an intake cell at the jail, according to an Alameda County Fire incident report,

A minute later, firefighters were called to help and they arrived at 2:13 p.m.

But even though deputies had cut him down and performed CPR, Chia was pronounced dead at 2:30 p.m. that day, the report states.

Chia had been booked into jail on Oct. 27 about 10 p.m. on suspicion of masterminding a murder-for-hire plot against his longtime girlfriend, dentist Lili Xu.

Jeff Bornstein, an attorney who is helping to oversee a federal consent decree over Santa Rita Jail, said it's troubling that Chia was in the intake room for so long.

"While we don’t know why Mr. Chia was in an ITR cell for so long, we can tell you that he should not have been,," Bornstein said.  "He also should have been screened by Mental Health before he was housed in any cell.  Making sure that people are safe and not at risk of self-harm is a principle focus of the consent decree."

Bornstein said his firm, Rosen Bien Galvan & Grunfeld, has  requested a timeline of events and other materials "to ensure that corrective actions are taken."

Nelson Chia is seen on YouTube video singing at the memorial for his girlfriend Lili Xu, the Oakland dentist who was shot and killed back in August in the city's Little Saigon neighborhood. For months, he appeared at least outwardly to be the grieving boyfriend, heartbroken over his loss.

Chia was originally booked at Santa Rita Jail, because Oakland police said he hired Hasheem Bason, 33, of Stockton to kill her on Aug. 21 for financial gain. How the two men met and knew each other has not been explained.

Chia, who sang at Xu's funeral and acted like a grieving boyfriend until his arrest, stood to make at least $1 million from her $14-million empire, police said.

Bason is now in custody at Santa Rita Jail. He has not yet entered a plea. His defense attorney, Christina Moore, declined comment through the Alameda County Public Defender's Office.

Chia is one of two men to have died last week at Santa Rita Jail within a span of two days.

Chia and Muhammad's deaths mark the 60th and 61st in-custody deaths at Santa Rita Jail since 2014. Twenty of those deaths have been by suicide.