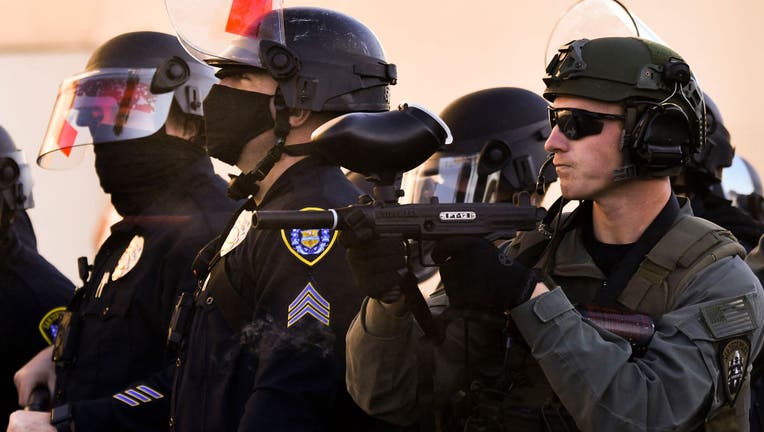 SAN DIEGO, Calif. - A new policy implemented by the San Diego Police Department sets parameters on how officers respond during demonstrations, from when they give dispersal orders during protests deemed unlawful to when they fire less-lethal rounds, a newspaper reported Sunday.

The rules were formed following last year’s recurring protests against police violence in San Diego and across the nation, the Union-Tribune reported.

Some San Diego protesters decried the way police responded to the demonstrations — at times in tactical gear and large numbers, and with force. Meanwhile, San Diego police described some of the protesters as unruly, saying some threw rocks and bottles at officers on the front lines, the newspaper said.

The new policy was unveiled Thursday when the department uploaded a 15-page document to its website. A police spokesman told the Union-Tribune that department leaders were not available to discuss it.

The department’s goal, the document states, is to ensure demonstrations stay peaceful, prevent criminal activities, control traffic and "facilitate the safe exercise of an individual or group’s First Amendment rights."

The policy assigns several key duties to a designated incident commander, beginning with the development of a contingency plan. To determine the appropriate resources and level of preparedness, the incident commander should consider factors including the composition of the group that is expected to turn out and the size, time and location of the demonstration.

Other considerations include whether arrests or unlawful acts, including riots, are "planned or likely."

During a demonstration, the policy notes, officers may encounter individuals who engage in criminal activities that don’t reflect the larger crowd. In those instances, if feasible, officers must address the crimes with little disruption to the demonstration.

It is up to the incident commander to decide whether to declare a demonstration unlawful under state law. The incident commander must consider factors including the number and nature of unlawful acts, the threats to people or property and whether arrests would be more appropriate than forcing the crowd to disperse.

If the demonstration is deemed unlawful, the policy requires at least three dispersal orders, in Spanish and English. An officer must make the announcements through equipment such as a bullhorn or public announcement system. Crowds must be given "ample means of egress" and "reasonable time" to comply, the policy states.

Before the orders are announced, officers must turn on their body-worn cameras, the newspaper reported.