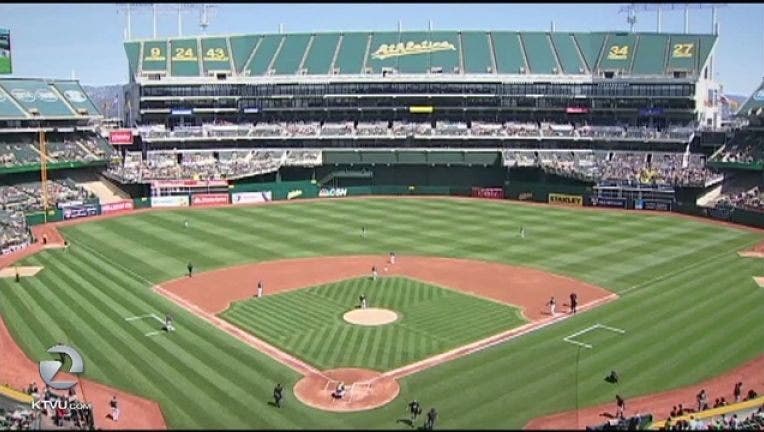 OAKLAND, Calif. - The Oakland Coliseum could become a mass coronavirus vaccination site as soon as February following Friday's meeting of the governing joint-powers authority that oversees the property.

The Oakland-Alameda County Coliseum Authority's Board of Commissioners chose to create a task force that will oversee the Coliseum's temporary conversion into coronavirus mass-vaccination center.

"I cannot personally think of a higher and better use for the parking facility," Gardner said.

The Coliseum was floated earlier this week as a potential mass-vaccination site after Gov. Gavin Newsom announced that similar sites would be launched at Dodger Stadium in Los Angeles, Petco Park in San Diego and Cal Expo in Sacramento.

A spokesperson for the Athletics confirmed on Monday that the team was in talks with county officials to use the Coliseum as a vaccination site, but a formal announcement has yet to be made.

The vaccine's rollout has been slowed statewide so far, due in part to a dearth of enough vaccine doses for all who want one.

"I've heard that there's been a concern of not sufficient doses to ensure that those who have already received their first dose can get their second dose," Commissioner Treva Reid said.

"So as we're activating this site, (we need) to make sure that we're also prioritizing and launching whatever efforts we need to get as many doses as we possibly can into Oakland."

Kaval said Rep. Eric Swalwell, D-Dublin, and other federal officials recently told him that additional vaccine doses are likely to be distributed once President-elect Joe Biden is sworn in, which could speed up the Coliseum vaccination site's opening.

The board also elected to tap Kaval for a seat on the task force, which he accepted.

"Hopefully we can get this going as soon as possible because it's a great asset to our community," Kaval said.

The Alameda County Public Health Department still must approve using the Coliseum site as a vaccination center before it can begin providing doses.

The task force is expected to report back to the board at its next meeting, scheduled for Feb. 19.