Firefighters on Monday battled a large fire at a homeless encampment in West Oakland near the Emeryville border, where plumes of heavy smoke shut down nearby freeways.

OAKLAND, Calif. - A fire at an Oakland homeless encampment Monday sent a huge plume of black smoke into the air and threatened to throw the Bay Area's most critical interchange — the MacArthur Maze, into complete chaos.

It had all the makings of a major transportation disaster of the highest order, an out of control fire directly under the maze.

At 10:20 a.m. firefighters responded to what would quickly become a second-alarm fire with mutual aid from the City of Alameda and the county. 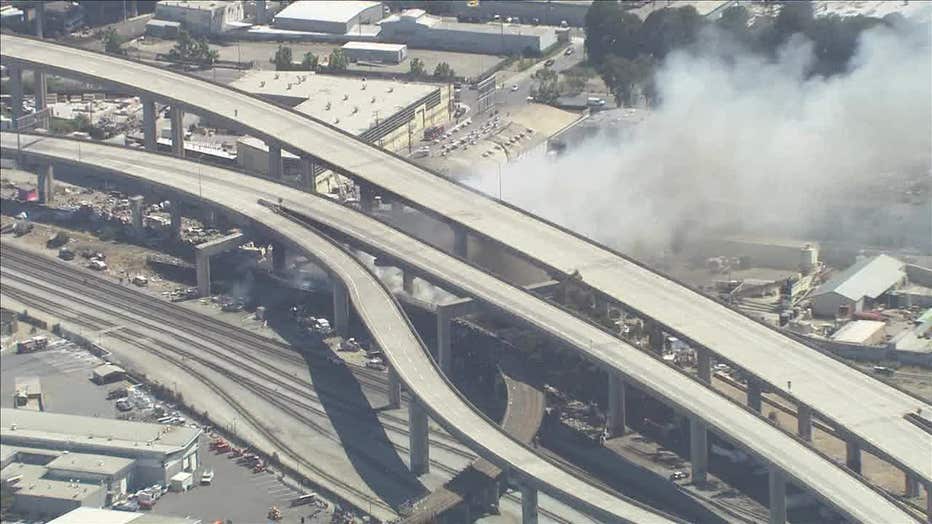 An unused wooden trestle caught fire after a homeless encampment fire spread it to other vehicles. The creosote soaked timbers gave off seriously toxic thick black smoke; so much smoke that Caltrans closed much of the maze to avoid crash. Those highway closures created a monumental traffic jam.

Underneath, a dangerous inferno threatened the firefighters.

Traffic was a mess Monday morning as Oakland firefighters responded to a second-alarm fire at a well known homeless encampment that regularly erupts in flames. Tom Vacar reports

"We have cars, we have RVs, we have a ton of combustible materials, hazardous materials. We've had several explosions since we've been here working on this incident," said Chief Reginald Freeman of the Oakland Fire Department.

The fire gave off a lot of heat, some of which bathed the underside of the maze's Interstate 880 steel and concrete structure.

"We've had numerous fires here at this location and we, every time, have concerns about the structural integrity," said Freeman.

Caltrans inspectors immediately examined the freeway interchange to make sure it could be reopened for the evening commute. Later that afternoon, the maze was deemed safe and reopened to motorists.

The Metropolitan Transportation Commission says the MacArthur Maze is the heart of its system.

"Essential for commute traffic, commercial traffic, freight distribution. So, it's tied in with Bay Area's mobility and the Bay Area's economy. It is literally like the aorta," said John Goodwin, director of communications for the MTC.

" So that's ongoing right now. So, we'll know in the next day, if not tomorrow, if there's been any damage. But, I don't think so." said Caltrans Deputy District Director, Cheryl Chambers.

The homeless encampment were the fire erupted was already being dismantled, but such encampments are often found under freeways.

"We're worried about people being underneath the freeway, where anything can happen," said Chambers.