Four days after an independent commission fired Oakland’s police chief, Anne Kirkpatrick spoke publicly for the first time on Monday, alleging that her public termination is partially in retaliation for failing to do favors for a member of the very board that dismissed her.

OAKLAND, Calif. - Four days after an independent commission fired Oakland’s police chief, Anne Kirkpatrick spoke publicly for the first time on Monday, alleging that her public termination is partially in retaliation for failing to do favors for a member of the very board that dismissed her.

Kirkpatrick said she believes she lost her job because she refused to reimburse commissioner Ginale Harris for towing fees. According an internal, confidential memo from 2018 reviewed by KTVU, the chief told the city that Harris “demanded” that she receive reimbursement for towing fees but the chief “refused to provide any special treatment” to Harris.

The memo goes on to say that Kirkpatrick feared "retaliation" for the decision. The memo, written up by a private investigator and sent to Oakland's Human Resourses department, does not outline the exact dates of the towing or how much money Harris allegedly owed. The memo is also a summary of this alleged interaction; there is no hard evidence, like an email to the chief, that Harris supposedly wrote. It is also unclear why this investigation into Harris was launched, though memo mentioned that Harris had been rude to city staff, including police officers, who felt "disrespected and abused," at a meeting that year. 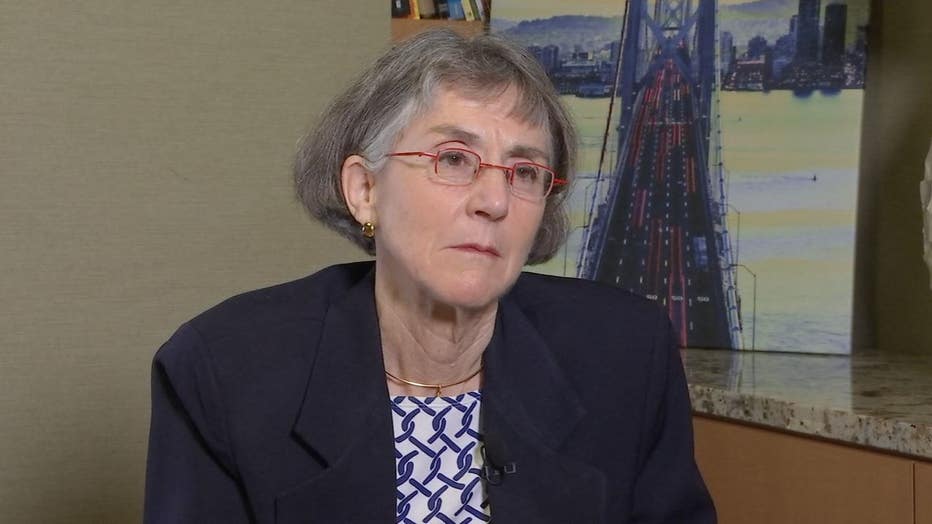 Harris has not responded to request for comment on the allegations.  Oakland Police Commission Regina Jackson told KTVU all of the claims against her colleague are "unfounded."

Kirkpatrick is now represented by high-profile public relations strategist, Sam Singer, and is pushing back against her termination. She said she may consider suing the city over her firing and is considering all her “legal options.” Kirkpatrick also called for the Department of Justice to investigate the commissioners who fired her, as well as the federally appointed monitor tasked with overseeing OPD reforms.

On a personal level, Kirkpatrick said that her dismissal was more than humiliating for a career veteran of her stature.

“I’m embarrassed. Those headlines went national,” she said. “It’s painful to me. It’s not how I would like to end 38 years.”

Kirkpatrick said she wants the public to know that the city "hired a woman of integrity."

The Oakland Police Commission unanimously fired Kirkpatrick “without cause” on Thursday, with the approval of Mayor Libby Schaaf, who appointed the city's first female police chief in 2017 on the heels of an explosive police sex scandal. There was no single reason for Kirkpatrick's termination and no one has accused her of any crimes or corruption. But the commission, which has been meeting for the last two years, ultimately felt that Kirkpatrick did not represent the progressive police reforms they desired. The commission is made up of seven citizens and is the most powerful civilian police oversight body in the United States with rare abilities to fire the chief.

Schaaf's spokesman, Justin Berton, issued a statement Monday, reiterating much of what the mayor said after Kirkpatrick was fired last week: That the mayor remains "grateful" to Kirkpatrick, and that the city has seen its lowest levels of gun violence under her.  But Schaaf listened to the commission's unanimous vote in wanting to terminate the chief. Schaff said she signed on to the termination because she saw that the trust between the commission and the chief was "irrevocably" lost.

During her wide-ranging interview, Kirkpatrick made sure to tout her successes.

“I was given a mandate, first and foremost to reduce crime, to stabilize this police department, to restore trust and healing,” she said. “The last three years of my tenure were the three lowest consecutive years of the lowest crime rate in 20 years.”

While the commission had been visibly frustsrated with Kirkpatrick, the mayor had regularly defended Kirkpatrick, notably after Oakland police officers killed Joshua Pawlik in 2018 as he lay sleeping with a gun in his hands. The police commission and the federal monitor, Robert Warshaw, both recommended that those officers be fired, but Kirkpatrick refused.

“I cannot be bullied to change my opinion. I knew that if I had called that shooting out of policy that I would have been the darling of reform. I would have had great headlines. I was not willing to sell out,” she told KTVU. “If the Pawlik shooting is the reason they were looking to terminate me before due process has come to an end, then something is definitely wrong with our system.”

Kirkpatrick now says that the mayor’s change of opinion about her performance came as a surprise.

“I think well of Mayor Schaaf. I’m really surprised and quite disappointed. Three weeks ago she asked me to go Washington, D.C., and she’s introducing me as her fabulous police chief,” she said. “Two weeks ago, she’s saying in front of staff members that she was going to fight for me. I believed her.”

The chief's firing really shouldn't have been a shock to any close observers, said Rashidah Grinage, an activist with the Coalition for Police Accountability, a group that helped establish the police commission in 2016.

"It shouldn't have come as a surprise really for anyone paying attention," Grinage said. "We gave her every benefit of the doubt. We met with her on several occasions."

Grinage said her group concluded that Kirkpatrick was not moving aggressively enough on police reforms. Kirkpatrick had three years to make changes in the areas of racial profiling and how police use and report instances of force, as just two examples, and yet these areas continued to lag behind what the federal monitor expected. Plus, Kirkpatrick also failed to produce data and documents for the Oakland Police Commission, which is required by law, Grinage pointed out.

"Not only was it not moving fast enough," Grinage said. "[The department] was moving backwards."

The commission isn’t the only accountability body that Kirkpatrick criticized. She also took aim at the role of Warshaw, a federal monitor who has had oversight of the department since 2003. The court-mandated monitoring was implemented after the infamous “Riders” scandal, which uncovered corruption and criminal behavior by a group of Oakland officers.

“I believe in police oversight, but I believe in different models,” she said. “I do know this is going to be an extremely chilling effect on who would want to come in and that’s unfortunately because it’s a great city and it’s a great police department.”

Kirkpatrick told KTVU that she believes the current Warshaw, who is a former police chief himself, has reason to drag on the federal monitoring because he is getting paid for his work.

“It’s a million-dollar contract. Where is the incentive to find you in compliance?” she said. “When we look at the watchdog system you need to look at everybody because it has ties to government money that are being spent. I think someone needs to come in and look at the entire situation."

Since the agreement in 2003, Oakland has paid at least $16.7 million for the independent monitoring team to reform the police department and overhaul its culture. Chanin pointed out while this may appear costly, it's a lot less money than the police abuse settlements the city had previously paid out of the years. He also challenged Kirkpatrick's complaints, saying that she never once complained formally about Warshaw to the court during her tenure.

Jim Chanin, the civil rights lawyer, who along with John Burris, filed the original Riders case against the police, has been an intergral part of Oakland's police reform efforts. He challenged many of Kirkpatrick's assertions.

The first, he pointed out, is that the chief took the job one year after the police commission was voted by 80 percent of the electorate into power.

“It’s the model that we have, so you know, she took the job, knowing that’s the model,” he said.

He also dismissed the notion of the towing incident as reason for Kirkpatrick's firing. He quipped sarcastically: So, did the other six commissioners and Schaaf all vote to fire the chief because they were also upset at the alleged and unproven towing scandal?

Finally, Chanin said it's a little too late for Kirkpatrick to be chastising the federal monitor now.

“Kirkpatrick had all this time to criticize how much Warshaw has earned in the entire time she’s been chief and has never chosen to do so until now,” Chanin said.

As for Kirkpatrick’s intention to ask the DOJ for an investigation into Warshaw, Chanin says the former chief doesn’t have any ground to stand on.

“As I’ve said, many, many times, our first choice was not this monitor. This choice was made by Oakland police. They begged me to acquiesce to Robert Warshaw’s appointment. He is former police, and we were concerned about that,” Chanin said. “Warshaw didn’t give police what they wanted and now it’s our fault? Give me a break.”

Warshaw and his team declined any comment on the personal attacks.

Federal monitor Robert Warshaw declined to comment on the personal attacks against him. Feb. 25, 2020

Warshaw is currently in charge of monitoring OPD’s performance on 52 tasks that stemmed from the 2003 oversight agreement, but 17 years later the department is still out of compliance on eight items.

Kirkpatrick claims that she wasn’t given clear metrics for meeting the requirements of certain tasks on the list. Tasks include preventing racial profiling, tracking problem officers, reporting misconduct and turning on body cameras, to name a few.

READ: The federally-mandated tasks in which OPD is out of compliance

Federal oversight is rare. Out of about 18,000 law enforcement agencies in the United States, there are less than two dozen that are enforced by the Department of Justice or some other form of a federal "consent decree."

At the end of her tenure, Kirkpatrick said that Oakland is safer than when she first took the job, however she believes her termination “has created a total destabilization” within the department.

“It’s hard for these officers and staff now to believe, does the city really believe in these values?" she said. "Because they don’t practice them."

Kirkpatrick said she now plans to return to her hometown of Seattle while she evaluates her next steps.

"What I want is to be honorable in this," she said, "and let's get to healing, let's get this corrected."

KTVU's Lisa Fernandez contibuted to this report. This story was updated on Feb. 15, 2020.