NEW YORK - Pfizer and BioNTech on Thursday announced that they have formally submitted a request to U.S. regulators for emergency approval of their COVID-19 vaccine for children ages 5 to 11.

Pfizer said on Twitter that the companies had formally filed an application with the U.S. Food and Drug Administration.

The Pfizer COVID-19 vaccine is currently available in the U.S. for those 12 and older, leaving many younger children still vulnerable amid the rapid spread of the delta variant of the coronavirus. Thursday’s formal submission for Emergency Use Authorization represents the next step in ultimately protecting millions of children.

The FDA will now have to decide if there’s enough evidence that the shots are safe and will work for younger children as they do for teens and adults. An independent expert panel will publicly debate the evidence on Oct. 26.

If U.S. regulators agree, vaccines for the younger age group could begin within a matter of weeks. 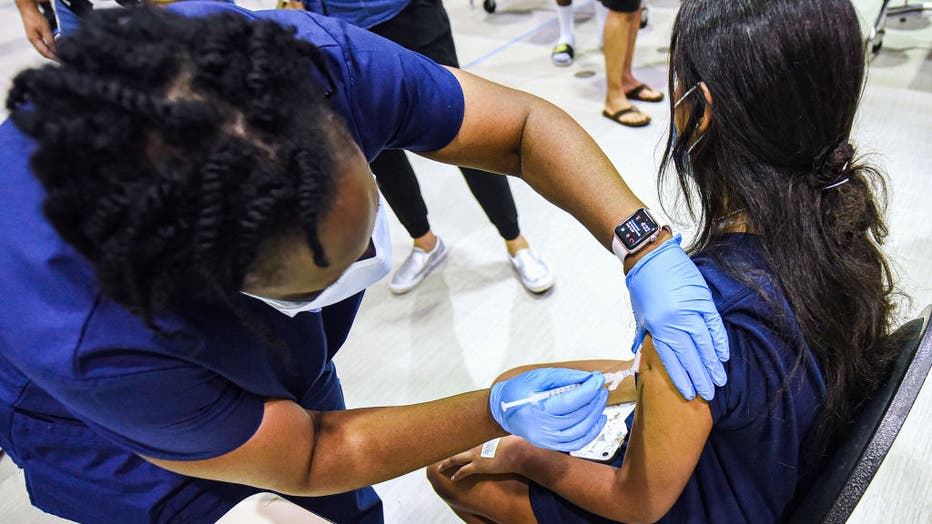 FILE - A nurse gives a girl a dose of the Pfizer vaccine at a COVID-19 vaccine clinic at Lyman High School on Aug. 9, 2021, in Longwood, Florida. (Photo by Paul Hennessy/SOPA Images/LightRocket via Getty Images)

Pfizer says its research shows the younger kids should get a third of the dose now given to everyone else. After their second dose, the 5- to 11-year-olds developed virus-fighting antibody levels just as strong as teens and young adults get from regular-strength shots.

"With new cases in children in the U.S. continuing to be at a high level, this submission is an important step in our ongoing effort against #COVID19," Pfizer wrote on Twitter. "We’re committed to working with the FDA with the ultimate goal of helping protect children against this serious public health threat."

While kids are at lower risk of severe illness or death than older people, COVID-19 does sometimes kill children and cases in youngsters have skyrocketed as the extra-contagious delta variant has swept through the U.S.

The companies previously submitted data to the U.S. Food and Drug Administration from a late-stage trial involving more than 2,260 participants, which the agency has been reviewing. Pfizer has said there were no side effects. But experts say the study isn’t large enough to detect any extremely rare side effects, such as the heart inflammation that sometimes occurs after the second dose of the regular-strength vaccine, mostly in young men.

If the FDA authorizes emergency use of the kid-sized doses, there’s another hurdle before vaccinations in this age group can begin. Advisers to the Centers for Disease Control and Prevention will decide whether to recommend the shots for youngsters, and the CDC will make a final decision.

RELATED: More than 120K US kids had primary caregivers die during pandemic