A former Pacific Gas &amp; Electric lineman who was fired after he says he raised safety concerns about a potentially dangerous piece of power equipment, installed in high fire-risk areas in Northern California, is suing the utility for more than $7 million.

Napa, Calif. - A former Pacific Gas & Electric lineman who was fired after he says he raised safety concerns about a potentially dangerous piece of power equipment, installed in high fire-risk areas in Northern California, is suing the utility for more than $7 million.

PG&E operates more than 2,800 devices called “reclosers” that shoot bursts of electricity to reenergize a line and restore power when a bird, branch, or something else causes the line to turn off.

About three years ago, a Napa man named Todd Hearn, who had worked for PG&E for two decades, helped install the devices, which the utility refers to as TripSavers, around the Napa Valley.

TripSavers, as the name implies, save workers a trip to fix a line that suddenly stops working and quickly get the lights back on. But, Hearn claims there are major fire risks that come along with the time-saving device.

“It’s like a lightning strike coming at you. It lights up the sky. It’s hotter than the sun,” Hearn said. “They’re not supposed to be in the high fire area and that’s what I don’t understand.”

Not only did he not understand, he feared the worst and explained he took his and his fellow employee’s concerns straight to utility management. 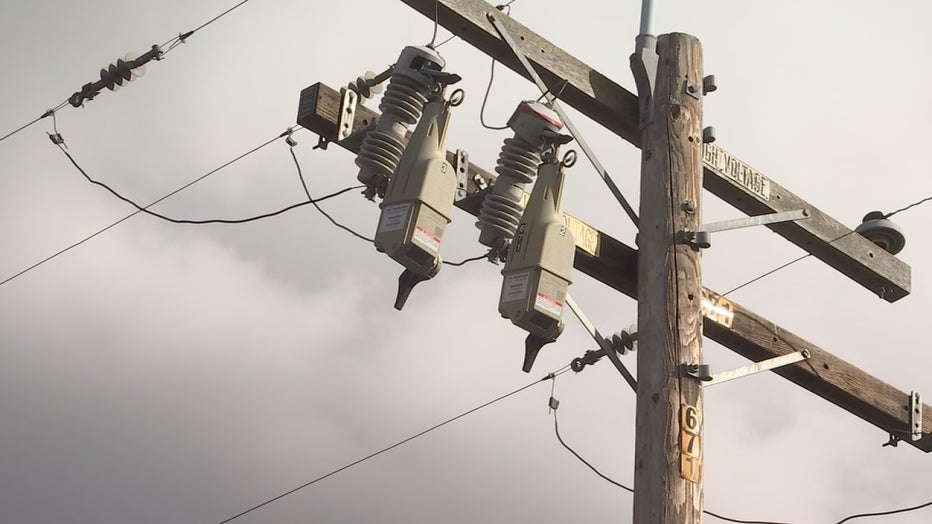 A few months later, in October 2017, deadly fires sparked and raged across the North Bay.

Cal Fire concluded the series of fires were caused by a downed power line after PG&E tried to re-energize it.

“We all knew these shouldn’t have been out there,” Hearn said. “They couldn’t understand our concerns and they couldn’t address them. Everybody just kind of put their heads down.”

It’s unclear if a TripSaver was to blame, but Hearn kept speaking up until he was sent home – he says with no explanation – and months later fired.

With the utility’s bankruptcy, civil suits have largely been put on hold for now. In a March letter to Hearn, PG&E said his retaliation claim for raising safety concerns was unfounded.

PG&E responded to KTVU’s request for comment about Hearn’s case and said he “violated the Employee Code of Conduct by misusing company time, misstating work activities, and fraudulent submissions of timecards for overtime compensation resulting in all day rest periods, and delayed service time to customers in violation of the labor contract.”

Hearn disputes those responses and points to court records that allege he, and at least four other utility workers, were let go after they stood up for safety. PG&E has maintained all ex-employees were terminated for misusing company time or violating policies.

But Hearn's also filed a workplace safety claim with the Occupational Safety and Health Administration and even presented letters about his concerns to top company leaders at the June shareholder’s meeting.

Costin said he only wanted officials to listen to his fears that more fires could be sparked if action isn’t taken.

“I think PG&E ignored and tried to silence the very workers who they should have been listening to and trying to protect,” Costin said.

PG&E told 2 Investigates that beginning in 2018, the company “implemented a Wildfire Reclosing Disable Program to disable the automatic reclosing capability on devices located in high fire threat areas, which includes TripSavers and line reclosers during fire season months or when there are elevated fire risk conditions.”

That means during dangerous weather, PG&E can now remotely disable a large number of TripSavers to avoid shooting electricity down a line to re-energize it automatically. Others that are not remotely capable of being disabled can manually be shut off.

TripSavers are manufactured by Chicago-based S&C Electric Company, which did not return requests for comment.

Regardless of capability, the devices themselves are still able to work as intended which leaves Hearn feeling uneasy. He still drives around Napa looking for the TripSavers that dangle from the power poles’ cross arms and reminding him of his old job.

“Looking back, I was actually just putting a target on my back,” Hearn said. “Sometimes I think I just should have stayed quiet.”