Maika Ting, 11, who has aplastic anemia, used a wish to create art work to help others who might need inspiration. Greg Liggins reports

PIEDMONT, Calif. - A young girl in the East Bay who battled a life-threatening disease, saw a wish fulfilled, right before her eyes.

But in a way, her wish was really a wish for others: She created a mural to inspire others.

Two years ago, 11-year-old Maika Ting of Piedmont was diagnosed with aplastic anemia, in layman’s terms, bone marrow failure, an illness that can be life-threatening.

"I mean, it shook our world because up until that point Maika had always been a healthy kid, so it just hit us out of nowhere," her mother, Viola Sutanto, said Sunday at a special unveiling the mural at Jack London Square.

After the diagnosis, Maika’s family was introduced to the Make-A-Wish Foundation, which makes wishes a reality for sick kids facing an uncertain future.

Maika’s initial wishes included things life a personal gymnastics session with Olympian Simone Biles, or meeting former First Lady Michele Obama, but COVID limited options, and then she another idea: One that was geared not for herself, but for others. A large mural to brighten up the city for passersby.

"I always thought it would be cool to do like large scale art, but when I thought of the mural, it was really on the spot actually," said Maika. 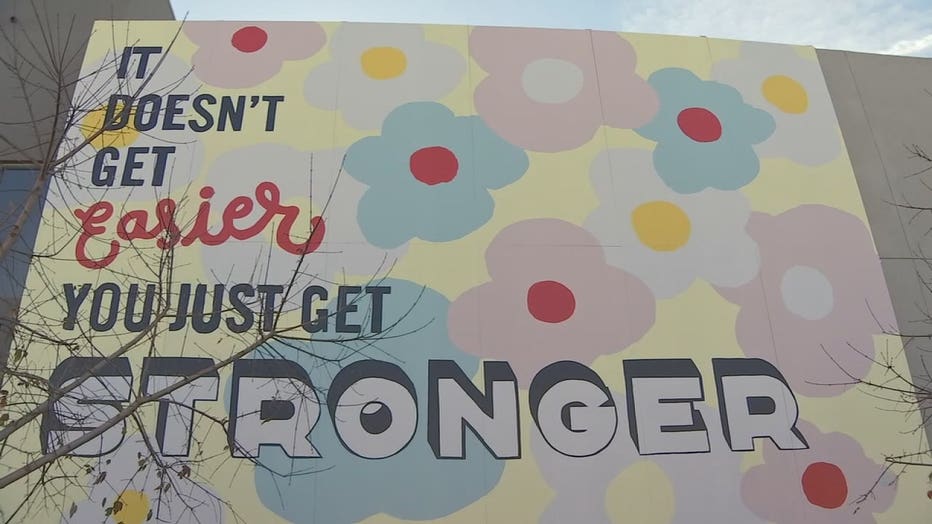 That spark of an idea would eventually come to life.

The Make-A-Wish foundation helped secure a space on the side of the Z hotel at Oakland’s Jack London Square.

CEO Betsy Biern said what's special about Maika's mural is that she tried give hope and inspiration to others.

And 70 friends and family joined together on Sunday to make something Maika conceived, and for the first time, she and a crowd saw it unveiled.

Emblazoned along the building, a colorful, flowerful burst of happiness with the quote "It doesn’t get easier, you just get stronger."

Those words exemplify Maika’s personal struggle fighting her disease, and she wants them to help lift others during hard times.

The 20-by 30-foot mural exemplifies a selfless act, bringing a bit more empathy and encouragement into the world.

In her young life, she has already left a legacy, for anyone who drives down 3rd street and Broadway to see.

"I think that really speaks to her truth, that was her journey," Sutano said. "Things never got easier, but she made it."

Maika is fortunate, her 6-year-old brother, Allistair, ended up being a bone marrow match, leading to the medical intervention she needed to be cured.