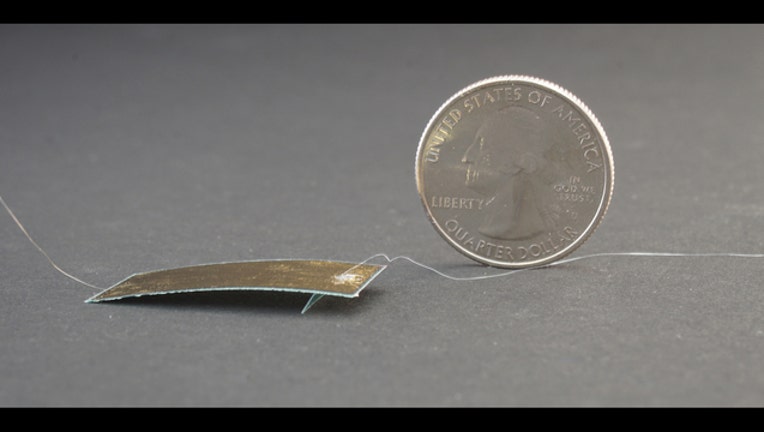 A new robot that moves as fast as a darting cockroach can squeeze into tiny crevices. (Photo credit: UC Berkeley)

BERKELEY, Calif. - A new robot that moves as fast as a darting cockroach and can squeeze into tiny crevices is being hailed as a tool that could help with search and rescue efforts following a natural disaster.

The new insect-sized robot, created by researchers at the University of California, Berkeley, can squeeze into places where humans and search dogs can't fit, or may be too dangerous for them to go.

"For example, if an earthquake happens, it's very hard for the big machines, or the big dogs, to find life underneath debris, so that's why we need a small-sized robot that is agile and robust," said Yichuan Wu, who helped author a study of the robot as a UC Berkeley graduate student in mechanical engineering.

The robot, which is about the size of a large postage stamp, is made of  durable materials that allows it to expand, bend and contract when an electric voltage is applied to it.

"Most of the robots at this particular small scale are very fragile. If you step on them, you pretty much destroy the robot," said Liwei Lin, a professor of mechanical engineering at UC Berkeley and senior author of a new study that describes the robot. "We found that if we put weight on our robot, it still more or less functions."

The tiny robot not only robust but has some remarkable abilities.

It can sail along the ground at a speed of roughly 20 body lengths per second (about the speed of a cockroach) and zip through tubes, climb small slopes and carry small loads, such as a peanut.

What's more, the robot, which weighs less than one-tenth of a gram, can withstand the weight of an average human, which is roughly 1 million times the weight of the robot.

"Somebody stepping on our robot is applying an extraordinarily large weight, but (the robot) still works, it still functions,'' said Lin.

The robot is currently "tethered" to a thin wire that carries an electric voltage that drives the oscillations.

Researchers are experimenting with adding a battery so the robot can roam independently. They are also working to add gas sensors and are improving the design of the robot so it can be steered around obstacles.