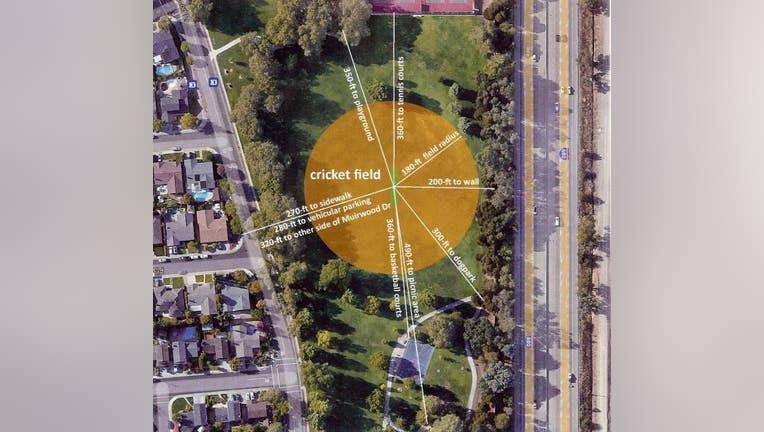 A cricket pitch being proposed at Pleasanton's Muirwood Park has drawn some controversy. Diagram: City of Pleasanton

PLEASANTON, Calif. - Neighbors in Pleasanton are at odds over a future cricket pitch.

Cricket advocate Rameshu Immadi, a city Parks and Recreation commissioner  – and his supporters, which include city staff – say the best place for a new pitch in the short term would be at Muirwood Community Park.

However, Cynthia Shon and about 600 others who posted on NextDoor, do not want it there.

The proposed pitch, which is what a field is called in cricket parlance, would be 63 feet long and 10 feet wide. However, Shon calculated what the entire space would take up – more than 100,000 square feet – which she said is the actual measurement that should be taken into account.

In a city memo, staff said that all other sports and activities would also be able to continue at the park, including soccer, tennis, pickleball and basketball. The Bay Area News Group first reported the controversy. However, cricket pitch debates have been ignited for decades in the Bay Area, including in cities such as San Jose, Dublin and Cupertino, the first city to approve an international pitch in 2010.

Shon's problems, she said, are not about not liking the baseball-like game placed mostly in South Asia and other areas of the world colonized by the British Empire.

It's simply about how big the pitch would be.

"It's just the amount of space it takes," Shon told KTVU. "It would take up the entire flat, grassy area. When a cricket match or practice is going on, no one will be able to walk on that area."

Plus, Shon said she has fears about safety.

"It could get dangerous," she said. "Because passersby could get hit. In cricket, if you hit it out of bounds, it's even more points."

Parking is also a huge concern for Shon. With families coming to play cricket, the residential street ending at 4701 Muirwood Drive will get clogged with fans' cars, she feared, as the park has no official parking lot.

And finally, Shon said, there is the appearance of a conflict of interest.

And she referenced the fact that Immadi sits on the nonprofit board called Cricket for Cubs and also voted as a commissioner to support the staff recommendation saying Muirwood Park is the best for a new cricket pitch.

"I don't like how decision was made," she said. "I'm not saying it was illegal, but it sure looks suspect."

For his part, Immadi responded to each of Shon's concerns — including her last one: He was told that he could vote on the project as long as he was a volunteer, which he is.

As for the site of the future pitch, Immadi said city staff reviewed three options and came up with Muirwood as the best spot.

And he also described what currently happens at the park: Weekend soccer games already takes up the grassy area that Shon is talking about, so adding cricket games would be nothing new. Soccer games last all day. So would cricket games. Families park their cars for soccer, and even fewer cars would likely be parked for cricket, since there are fewer players and fewer matches during the day, he said.

Cricket and soccer coaches are already working some sort of rotation on the field to alternate schedules during the weekends and each would play during the others' off-season when appropriate, Immadi said.

Flying balls should not be a problem, Immadi said, pointing out that there's a cricket pitch already at Alisal Elementary School and there have been no reports of injuries there.

As for what he thinks the real reason is for the naysaying? People just don't know enough about the sport, he said.

"But with the Tri-Valley demographics, cricket is the fastest growing sport," he said. "One third of Pleasanton students' parents are from countries where cricket is the primary sport."

"People need more awareness about cricket," he said. "It's new to them."

There have been some community meetings on the topic but at this point, the issue has not yet gone to the city council. City staff also recommended that for a long-term solution, the best bet would be the 17-acre Staples Ranch, located off of Stoneridge Drive and adjacent to the Pacific Pearl shopping center.

Staff pointed out that there is easy access to this area off Interstate 580 and can accommodate lots of parking.