It was a rowdy night on UC Berkeley's campus Wednesday when conservative commentator Ann Coulter spoke at Wheeler Hall. Outside the event, multiple protesters were arrested ahead of the event hosted by Berkeley College Republicans.

Coulter, who has a hard stance on immigration, spoke at Wheeler Hall Auditorium at 9:15 p.m. The event itself, organized by the Berkeley College Republicans, was delayed when demonstrators formed a human chain, blocking the entrance to the hall making it difficult for ticket holders to access the building.

A KTVU cameraman inside the hall said the auditorium was two-thirds full. There were two hecklers inside. One was allowed to stay after he agreed to be quiet. Another was removed from the event.

Protesters began gathering with signs and started chanting things like, "Hey, hey! Hey ho! Ann Coulter has got to go!", as early as 6:45 p.m.

Police are securing the area on UC Berkeley's campus where Ann Coulter is expected to speak.

A protest at UC Berkeley is growing Wednesday night ahead of conservative commentator Ann Coulter's speaking engagement. KTVU's Andre Senior reports from campus where there is a heavy police presence and a very vocal group hoping to prevent Coulter from speaking.

KTVU's Andre Senior reported from the scene that demonstrators said they do not want the right-wing conservative to speak and are willing to do whatever is necessary to make sure that does not happen.

One protester said through a megaphone that he believes if enough people gather outside, the event may be canceled. That did not happen, but ticketed event attendants had to jump over barricades, because of the demonstrators.

One man said he paid $45 for his ticket and wanted to get inside.

"They can protest all they want, shout their slogans, free speech. I'm cool with that," said Derrick Main a Marin County Republican Central Committee Member. "But I am not cool with having somebody block our way getting in."

Mutual aid is being provided by California Highway Patrol officers who are on campus in riot gear and have formed skirmish lines to keep protesters at a distance from the hall. They also helped escort people from the event as it ended.

UC Berkeley Police tweeted "multiple masked protesters" have been arrested at the campus event. Campus police officers detained those who were wearing masks or covering their faces. Covering your face is against campus protest policy.  There were seven arrests made by the end of the event.

KTVU reporters at the scene did not witness any violence or vandalism, though there were some testy moments.

Organizers with the group By Any Means Necessary said they wanted to shut down the event. However, some students who participated in the demonstration on campus said Coulter should be allowed to speak.

"I think it's important to hear people like her speak, to know that this is real. We learn about stuff like this in the classroom," said UC Berkeley student Aurora Lopez.

"Fundamentally we have the right to free speech. What we're doing by protesting is showing that her specific speech is not welcome here," said Gianluca Pedrani, a UC Berkeley student.

Many students who gathered outside the hall were simply spectators.

"I may not agree with what she has to say, but she has all the right to say it," said another student Luke Radabaugh. "I think it could even open up to better discourse to start a conversation. By shutting down the conversation, it really leads to nothing."

"By shutting down the conversation, it really leads to nothing."

Berkeley and UC Berkeley police departments said they did not want to see a repeat of 2017, when Coulter and Milo Yiannopoulos, a British far-right commentator who says he has since gone broke, were scheduled to appear on campus on separate occasions. Coulter's appearance was canceled by the organizer, Young America’s Foundation, a conservative group that pushes "traditional values."

Their appearances, part of a 'Free Speech Week' event that former Breitbart editor Yiannopoulos and Coulter were promoting, have cost the university large sums of money in security fees. Yiannopoulos' 20-minute appearance in 2017 cost UC Berkeley more than $800,000.

Berkeley College Republicans said they were "undeterred" by the protesters. They thanked attendees by saying, "Your contribution to protecting free speech on campus is invaluable!" 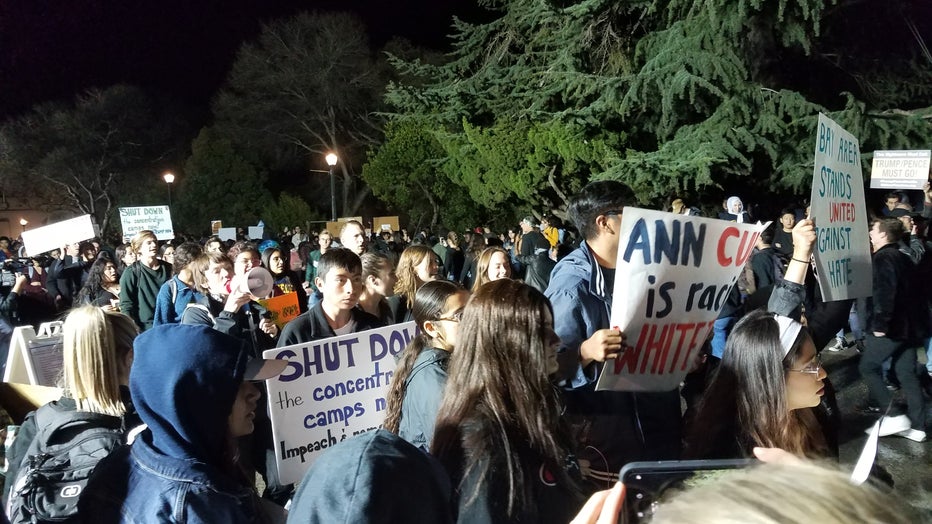 UC Berkeley Police and California Highway Patrol are securing an Ann Coulter speaking engagement on campus where protesters have arrived.