Fire crew rescues puppy from beneath floor boards in Iowa

A five-month-old puppy had to be rescued by a fire crew after getting trapped under a deck at his owner’s home in Davenport, Iowa, on Nov. 23, 2021. Credit - Davenport Fire Department via Storyful

DAVENPORT, Iowa - A tiny puppy named Buddy had to be rescued by fire crews in Iowa after getting trapped beneath a deck at his owner’s home.

The sweet rescue was reported on Nov. 23 in the eastern city of Davenport. Buddy’s owner called the Davenport Fire Department after she was unable to reach the 5-month-old puppy, who was crying after being stuck under the deck for nearly an hour, officials said.

A video shared by the fire department shows firefighters removing a deck board to reach the scared puppy trapped underneath. Davenport Fire Department’s Fire Marshal Jim Morris told Storyful that Buddy had also become tangled in his leash.

The puppy was very excited to be free and was not injured during the ordeal, Morris added. 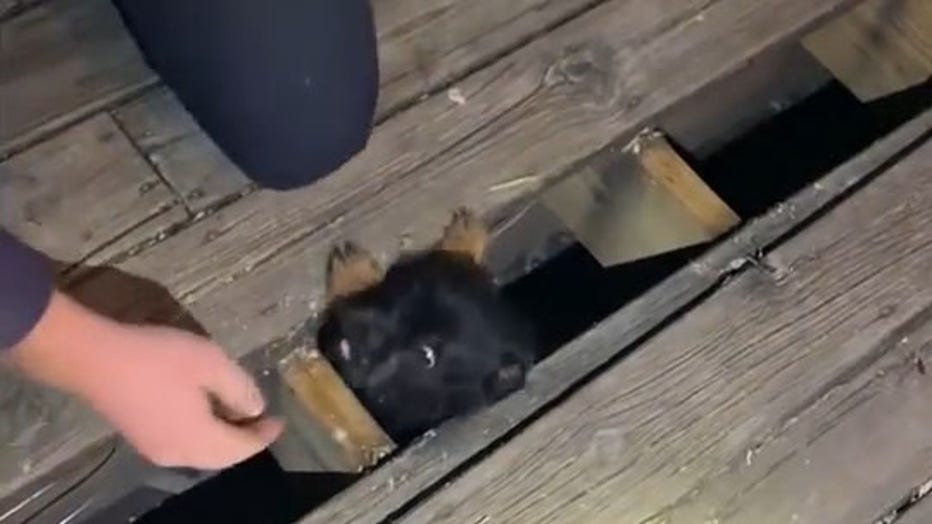 "Please enjoy a video of one lucky dog who was thankful to meet Davenport Firefighters after having a ruff time outside," the department wrote on Facebook.

Another family dog was recently rescued by firefighters in Hungary after getting its head stuck in an iron door. Footage of the rescue operation was shared by Hungary’s disaster management agency, showing the animal’s head caught in what appears to be a small hole in the doorway. The animal walked away unscathed.

Firefighters come to rescue after dog gets head stuck in door

A dog was rescued by firefighters after its head got stuck in an iron door at a family home in rural Hungary on Oct. 10, 2021, officials said. Credit - Godollo HTP via Storyful

Days later, firefighters in Arizona rescued a cat after it got stuck in a cinder block wall — and later learned the animal matched a lost pet pictured on fliers in the area.

Last year, a dog in Louisiana suffered a similar fate after getting stuck under a fence while trying to escape a backyard. The animal tried to squeeze through a small hole dug underneath the fence in a yard near Baton Rouge and had to be helped by firefighters out of the predicament.