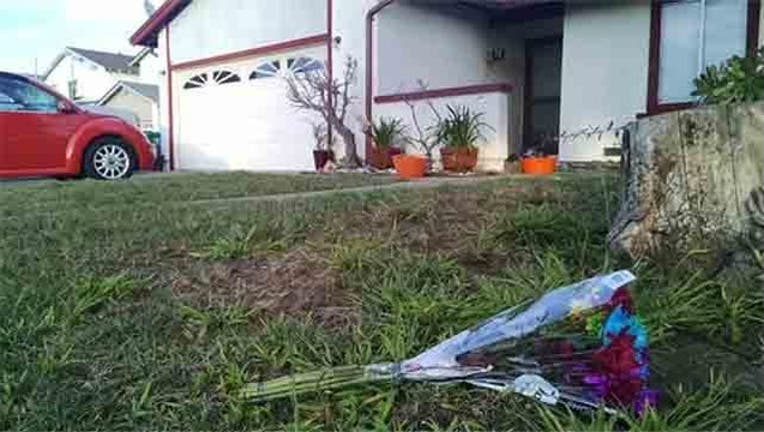 On Thursday afternoon, Hercules Police announced what they think happened during the fatal incident, though some mysteries remain.

Bits of crime scene tape and an area of dried blood are the only visual clues to the violence that erupted on Wednesday.

Around 2:45 p.m., a witness reported seeing a man choking another man outside a home on Buttercup Court. The man being choked later died of head trauma.

A woman at the home was also seriously injured.

"I am devastated, to be honest with you. To know your neighbor is gone," said neighbor Romy Delumen.

He and the male victim had lived next door to each other since the other man moved in some 15 years ago.

On Wednesday night, Delumen showed KTVU the back of the victim's home, where you could see a screen pulled off the window.

"The bent screen at the back of the house appears to have been an exit rather than an entry," said Det. Van Putten.

"The male and female victims are talked about by her family as being good friends that have known each other for many years. But they did not live together. She had her own home," said Van Putten.

That woman remains in critical condition, with significant internal injuries but no obvious signs of trauma.

"We're waiting for medical reports to give us more information," said Van Putten.

Police arrested a suspect quickly. They recovered a bicycle he was seen riding earlier and a BB gun they said he was carrying.

"Now that I think about it, yes, it's scary. First time I know of anything like this to happen around here," said neighbor Emerson Bell.

Not only was this the first killing in Hercules in more than two years, it was also just the sixth homicide in 11 years.

Police said they hope to release the identity of this alleged killer sometime soon. They did confirm he is a 27-year-old man from San Pablo.