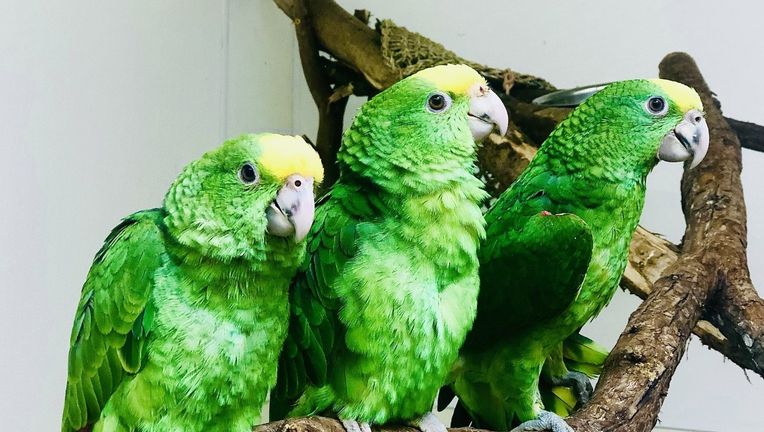 Three Amazon parrot chicks that were recently confiscated from smugglers are being cared for at the San Francisco Zoo and Gardens, zoo officials said Monday, June 13, 2022. (Photo Credits: SF Zoo and Garden)

SAN FRANCISCO, Calif. - Three parrot chicks that were being smuggled into the U.S. were rescued and have a new home at the San Francisco Zoo and Gardens.

The yellow-crowned Amazon parrots were 10 weeks old when they were confiscated and placed at the zoo by the U.S. Fish and Wildlife Service, zoo officials said Monday.

"We feel that these chicks are among the lucky ones," said Tanya M. Peterson, CEO and executive director of the San Francisco Zoological Society.

"Not all trafficked animals will be able to live a quality life, and we hope these three can serve as ambassadors in our South American Tropical Rainforest and Aviary to tell the story of illicit wildlife trafficking and its negative consequences on wild populations."

The yellow-crowned Amazon parrot, or Amazona ochrocephala, has a life expectancy of 60 to 80 years and is native to South America, Panama, Trinidad and Tobago, according to zoo officials.

They are highly intelligent, with the ability to mimic what people say. The birds are mostly green, have a crown that is deep yellow, with red or orange feathers under the wing and a white ring around the eyes.

Parrot chicks taken from their nests as hatchlings are often shipped in boxes without proper ventilation or water for the illegal pet trade.

"When these chicks were confiscated, U.S. Fish and Wildlife sought out zoos with expertise in hand-rearing parrot species to assist and provide a home for this young trio," Peterson said. "Thankfully, we have both the expertise and a home for them."

The zoo's veterinary staff gave the chicks a check-up and found them to be healthy. Now 12 weeks old, they are still being hand-fed by animal care staff, and starting to eat food on their own.

"Already, the chicks are playful and curious," said Dominick Dorsa, vice president of animal care at the zoo.

"While this species is sexually dimorphic at maturity, a blood test has confirmed that two of these birds are male and the other female," Dorsa said.

Guests to the zoo will not be able to see the chicks until they have matured, officials said.