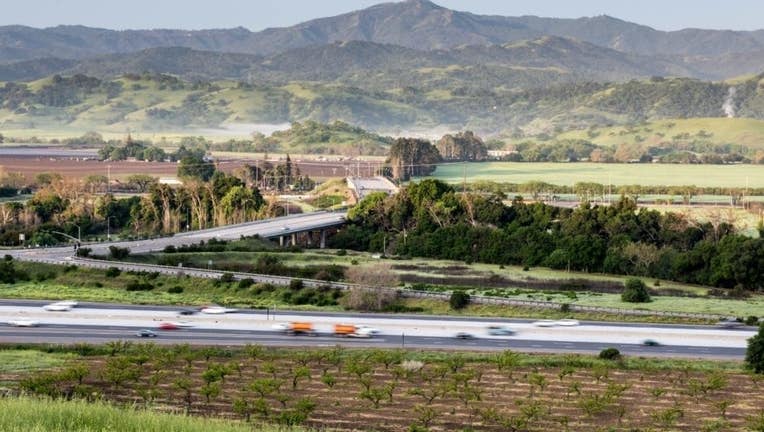 Coyote Valley is pictured at sunrise in this file photo. Photo courtesy of Open Space Authority.

More than 160 letters were submitted ahead of a meeting Oct. 29, including 116 with the subject "Please Protect Coyote Valley" asking task force members to preserve the land as agricultural and open space.

Charlene Nijmeh, chair of the Muwekma Ohlone Tribal Council, said it's important for the city to consider how its decisions will affect future generations. The Muwekma Ohlone Tribe includes Native Americans who trace their ancestry through Missions Santa Clara and San Jose.

"We have been on these lands, lands made sacred by the blood of our ancestors, for thousands of years," Nijmeh said. "We understand on a deep level the importance of nature."

Coyote Valley has a complex planning history. The 7,000-acre stretch of mostly agricultural land between San Jose and Morgan Hill has been considered for various purposes since the 1960s, when  San Jose first imagined it as an area suitable for industrial uses.

The city re-designated the valley for agricultural uses in 1976, after which city planners began zoning specific portions of the area - referred to north, mid- and south Coyote Valley - for different uses. 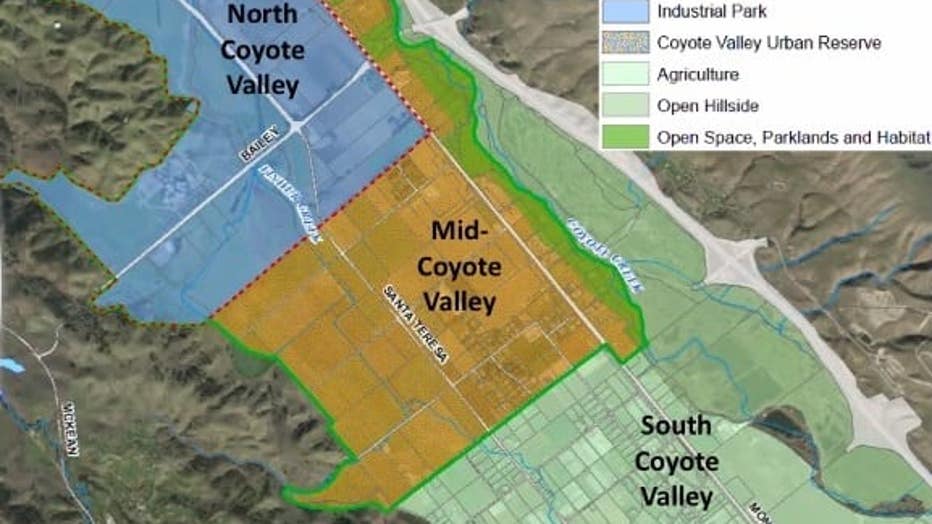 A map of Coyote Valley showing its existing land use designations. Image courtesy of the City of San Jose.

Companies and developers, including Cisco Systems, explored building commercial and industrial campuses in the area in the early 2000s, but plans fell through as the promises of the dot-com boom fell short.

North Coyote Valley was assigned to accommodate 35,000 new jobs in 2011 when the City Council adopted the 2040 General Plan. The 1,700 acres of land are home to oat and wheat farms, as well as IBM's Silicon Valley Lab, Metcalf Energy Center and part of Gavilan College. Currently, the area comprises 17 percent of the city's total "employment land," designated for job growth.

In 2018, voters approved Measure T, which allocated $50 million in bonds to improving flood protection areas, such as Coyote Valley. In November 2019, the City Council approved the purchase of 937 acres of land in North Coyote Valley.

About 314 acres of the area remain to be either developed or preserved as open space, according to Jared Hart, division manager of the city's Planning, Building and Code Enforcement Department.

Preserving the area as open space fits within the city's greenhouse gas emissions goals as stipulated in its Climate Smart and Vehicle Miles Traveled plans, according to Hart. He said companies interested in developing the land are primarily building logistics and warehouse centers and would prefer to build closer to Highways 880 and 280.

Staff in the city's planning department made many recommendations, including re-designating the 314 undeveloped acres in North Coyote Valley from industrial park land to open space. The department also recommended relocating the 35,000 new jobs originally planned for Coyote Valley, shifting about 30,000 to downtown San Jose and 5,000 to Alviso. Alviso has a population of 2,100 people, according to real estate data.

Most people spoke in favor of the department's recommendations. However, a few property owners spoke against the proposal to re-designate the 314 acres of undeveloped land in North Coyote Valley, saying it's unfair to deprive those property owners of economic opportunity.

Edward Burg, a litigation partner at professional services firm Manatt, said the city needs to assess the economic impacts of preserving the undeveloped acres before making a decision. Burg also wrote a letter to the task force, stating agriculture is not an economically beneficial use for North Coyote Valley properties.

"No one interviewed the developer who is currently under contract to buy these North Coyote Valley properties for industrial development," Burg told the task force. "If the community wants to turn these developable properties into a community resource, the community needs to buy them."

Burg's letter was supported by former Mayor Chuck Reed, who spoke against the city staff's recommendation to re-designate the 314 acres.

"The staff recommendation on North Coyote (Valley) is unfair to the families who now have a chance to put jobs on their lands," Reed said. He noted the legal argument in Burg's letter and added "It's not only unfair, but unconstitutional, to deprive property owners of their property rights, unless fair compensation is paid."

Stacie Shih, district director of California Assemblymember Ash Kalra, said Kalra has been fighting to preserve the valley since 2007, before he was a councilmember and supports the planning department's recommendation.

Alice Kaufman, legislative advocacy director at Green Foothills, said several endangered species such as mountain lions could be cut off from their native habitat if the land were to be developed for industrial uses. She said that logistics and warehouse uses of the area would turn the corridor into a "roadkill hotspot" and claim the lives of several wild animals.

The task force quickly moved to approve the recommendations to preserve the acres in a 26-6 vote.

Task force member Margie Matthews, a former San Jose councilmember, said she was concerned about reallocating 5,000 new jobs from the North Coyote Valley area to Alviso, which also has a sensitive environment.

"Alviso still remains a hidden gem," Matthews said. "It can really be an asset for everyone in terms of open space."

Michael Van Every, task force member and president of Republic Urban Properties, said the motion ignores the rights of property owners and the millions of dollars invested in infrastructure for the area.

"We're going to limit our economic development, frankly, with a lot of emotion," Van Every said. "I support property owner rights."

The land uses changes next head to the City Council for approval.

The next General Plan review meeting will be held 6 p.m. Nov. 19.