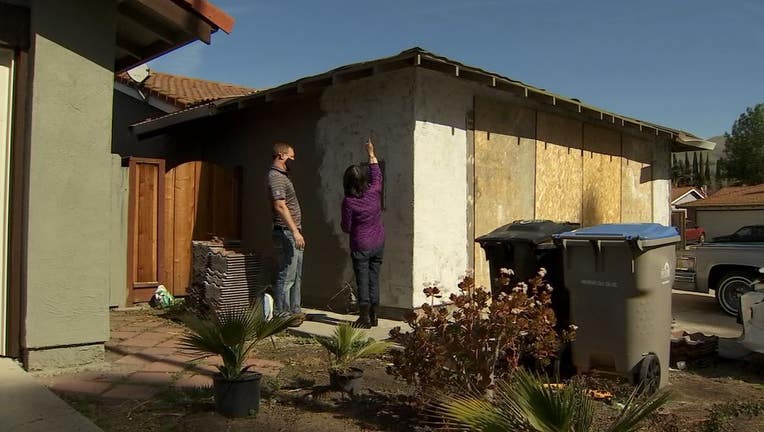 SAN JOSE, Calif. - Lifong Hwang was concerned when a tree engulfed by fire damaged her San Jose home on the Fourth of July. But that concern soon turned to dread and frustration as she tried to navigate the city’s bureaucracy to get it repaired.

After inundating the San Jose building division with emails and eventually reaching out to her local representative on the city council, Hwang finally received a permit to fix the rental property – seven months after the fire.

Lifong Hwang was concerned when a tree engulfed by fire damaged her San Jose home on the Fourth of July. But that concern soon turned to dread and frustration as she tried to navigate the city’s bureaucracy to get it repaired.

"The feeling is helpless," Hwang recalled in an interview with KTVU. "I was really confused why such a permit issue is so difficult to get. I see my contractor is ready to work and he has to work to make a living too."

It turns out that Hwang’s case wasn’t unique. Fire-damaged homes all over San Jose – properties the city’s building department says it prioritizes – have been sitting vacant as builders and residents wait for the city to issue a permit.

KTVU toured several of the homes with ServPro construction manager Steve Klimowski. He says he’s ready to start work on multiple properties but can’t because the city hasn’t issued permits.

"Nothing is more frustrating than a customer calling you and asking for an update and for the sixth week in a row you tell them the same thing, ‘Hey I’ve sent in another email. I’ve left a message and I’ve still got no response after weeks and weeks,’" Klimowski said.

He shared multiple back-and-forth email exchanges with the department. Some said no damage plans were required and then later ask for plans. In another case, an issue with the paperwork started the whole process over.

Some properties Klimowski is hired to work on have been empty and waiting for a permit for nearly two years.

In a statement, a spokeswoman for the city department of building said much of the trouble has been due to the COVID-19 pandemic and shelter-in-place order.

"It has been a challenge to provide timely customer service and to decipher types of permit requests because of staff transitioning to working from home and moving to an email exchange system," the statement says.

On March 10, a full year into the pandemic, the city launched a new online system where applicants can schedule appointments themselves without waiting to hear back from someone via email.

After KTVU reached out to the building division, it issued a permit for a home that had been sitting empty for two years on Logsden Way on the south end of the city. The residents were about to run out of money from their insurance company to pay for a temporary apartment to stay in.

Hwang reached out to her local city councilman, Matt Mahan, when she was having trouble. He tried to help, but he said he sees a larger problem with city government and accountability in general.

"We only have one city government so it’s critical that we provide trust by providing service more effectively," he said.

Before being elected in last year, Mahan ran a civics-focused technology company aimed at making the political process simpler.

He wants all city agencies to start using widely available technology to streamline customer service and accountability – tools like "key performance indicators" so agencies and the public will know if they’re slipping up.

"As the capital of Silicon Valley, San Jose ought to lead the world in technology adoption," he said. "We ought to be the easiest government."