WASHINGTON - Progressives introduced the "Green New Deal for Public Housing Act" this week, which would invest billions into retrofitting existing public housing over the next decade to reduce environmental hazards like lead and water poisoning, among other initiatives.

Sen. Bernie Sanders, I-Vt., and Rep. Alexandria Ocasio-Cortez, D-N.Y., announced the legislation Monday, looking to increase the public housing commitment above what is in President Joe Biden’s massive $2.3 trillion infrastructure and jobs plan. The White House has said Biden’s far-reaching plan aims to re-engineer the nation’s infrastructure while shifting away from fossil fuels and combating climate change, as well as addressing economic inequities.

The Green New Deal for Public Housing Act would create new grant programs to modernize U.S. public housing and transition to renewable energy. The legislation invests up to $172 billion over ten years in sustainable retrofits for the more than 950,000 U.S. public housing units. It aims to create thousands of maintenance and construction jobs.

The iteration of the proposal was unveiled in 2019 as part of the Green New Deal resolution laid out by Ocasio-Cortez and Massachusetts Sen. Edward Markey to address climate change. The sweeping plan drew criticism from GOP lawmakers, who denounced the plan as a radical proposal that would drive the economy off a cliff and lead to a huge tax increase. 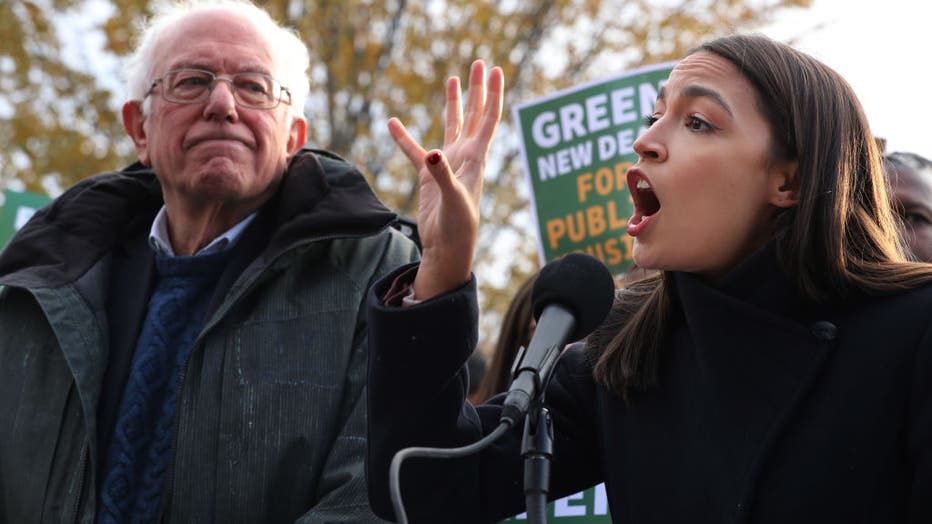 However, the landscape has since changed in Washington, D.C. Democrats now control the White House and Congress, with Sanders leading the U.S. Senate Budget Committee. Congress has also since passed laws investing trillions in federal funds to help the economy and other areas impacted by the coronavirus pandemic, which has some lawmakers now more open to substantial spending, according to the New York Times.

"The Green New Deal for Public Housing would increase affordable housing, reduce the cost of utility bills and eliminate environmental hazards like lead poisoning – all while creating nearly a quarter of a million good-paying jobs," Ocasio-Cortez said in a statement. "With America facing an affordable housing crisis and the perils of climate change, we must invest in our housing infrastructure now."

"Just to address the backlog of critical maintenance repairs in (New York City Housing Authority) and nowhere else – chipping lead paint, broken heating systems, failing gas utilities – would require $40M, what is currently in the American Jobs Plan," Ocasio-Cortez added. "This bill would invest up to $172 billion over ten years, improving the lives of nearly 2 million individuals and securing the long term future of the nation’s public housing stock."

Biden’s plan has drawn criticism from Republican lawmakers and business groups for proposing that corporate tax increases should finance an infrastructure package that goes far beyond the traditional focus on roads and bridges.

The president has proposed funding his $2.3 trillion plan largely through an increase in the corporate tax rate to 28% and an expanded global minimum tax set at 21%. But Biden has also said he’s willing to accept a rate below 28% so long as the projects are financed and taxes are not increased on people making less than $400,000.

"What the president proposed this week is not an infrastructure bill," Sen. Roger Wicker, R-Miss., said earlier this month on NBC’s "Meet the Press." "It’s a huge tax increase, for one thing. And it’s a tax increase on small businesses, on job creators in the United States of America."

The proposal announced by Sanders and Ocasio-Cortez comes as Biden hosts world leaders in a two-day virtual climate summit beginning Thursday — a moment for him to send a message about America’s return to the climate fight and nudge the world toward a greener planet.